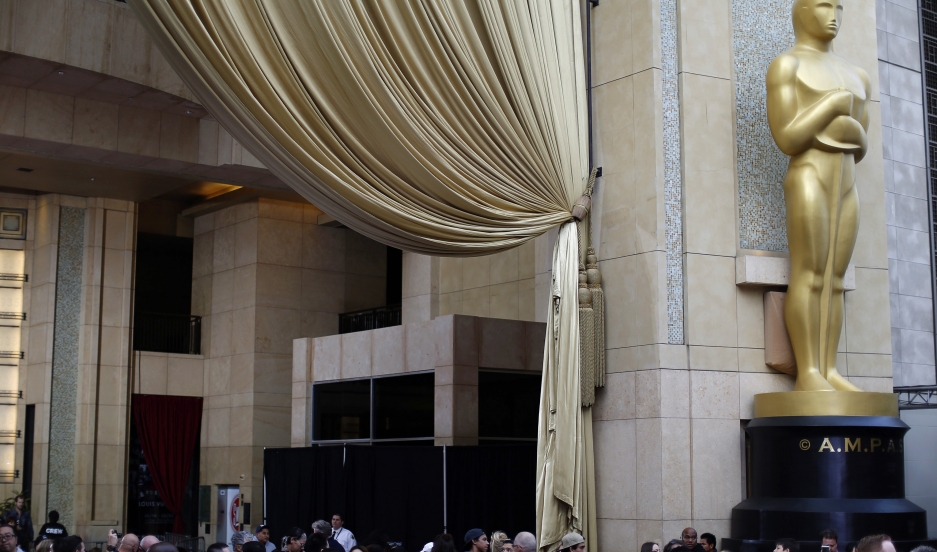 An Oscar statue is pictured outside the Dolby theater during preparations leading up to the 87th Academy Awards in Hollywood, California February 20, 2015.

The 87th annual Academy Awards are on Sunday, and before you watch, you might want to brush up on some of the movies you missed — or saw so long ago you forgot.

Rafer Guzman, film critic for Newsday, and Kristen Meinzer, culture producer for The Takeaway, both think “Boyhood” and “Birdman,” with nine nominations each, are the clear frontrunners for Best Picture.

“I don’t think you could ask for two more interesting and unusual films,” Guzman says.

Meinzer says that while “Birdman” may be innovative, it doesn’t deserve the Oscar.

“I think that Birdman is very overrated and that the industry loves a film about itself,” she says. “And why it is tied for the most nods this year with nine, I’m not quite sure.”

Her money is on “Boyhood.”

“Frankly, I think boyhood deserves to win,” Meinzer adds. “I think it’s a bigger accomplishment. It took 12 years. We’re checking in every year with this family, telling a story that’s pretty ordinary, but in a way that’s never been done before.”

Guzman was gunning for Benedict Cumberbatch, but then Eddie Redmayne changed the game.

“I just think like [Cumberbatch] seemed like the obvious choice,” he says. “It’s a very good role, and his movie “The Imitation Game” had done a lot better than “The Theory of Everything” at the box office, and everyone loves Benedict Cumberbatch. But then Eddie Redmayne won for playing Stephen Hawking at the Golden Globes, he won the SAG, and now it looks like he’s a sure bet for the Best Actor Oscar.”

Meinzer says Redmayne blows the competition out of the water. Michael Keaton’s role in “Birdman doesn’t stand a chance.

“The accomplishment of this role is unbelievable,” she says. “I mean, [Redmayne] can barely use one quarter of his face to play the role, and yet he’s somehow playing this role in a convincing, amazing way. He’s a fully forged person.”

Both critics view Julianne Moore as the likely winner for Best Actress.

“Julianne Moore in “Still Alice” is unbelievable,” Meinzer says. “She’s playing somebody who is dealing with early onset Alzheimer’s in a really unbelievably convincing way … She really brings you along for it where you feel what she’s feeling.”

If there’s any upset at all, Meinzer says the Oscar will go to Felicity Jones who played Hawking’s wife Jane Wilde in “The Theory of Everything”.

Guzman says that while Moore is amazing in “Still Alice,” there wasn’t much to choose from in the category.

“It happens to be the strongest performance in kind of a weak category,” he says. “Not that these actresses themselves are weak, I just think that all of their roles are a little underwhelming, and I think Julianne Moore’s role just allowed her to do the most with what she has.”

This Oscar is going to Richard Linklater for “Boyhood,” Meinzer says.

“Don’t get me wrong,” she says, “‘Birdman,’ as much as I make fun of it and say it’s overrated, it really is an unusual looking film. It looks like it’s done in a single take. And that’s unbelievable for a feature length film to look like that.”

While this might get “Birdman” a win for cinematography, it’s not going to win over “Boyhood.”

The two critics are in agreement about who is going to win in these categories.

“Patricia Arquette for ‘Boyhood’,” Guzman says. “She’s marvelous in it. [It’s] kind of a role that you don’t realize is really great until the movie wraps up and ends and she delivers this terrific speech at the end and you really realize what a terrific thing she’s been to that movie.”

On the actor front, even though Robert Duvall received a legacy nomination for “The Judge,” Guzman and Meinzer say there's no way he wins.

“J.K. Simmons for ‘Whiplash’,” Guzman says. “He’s great, he plays an abusive music teacher, he steals the show, he’s terrific, been around for years, and I think it’s great that he’s going to get the Oscar for this.”

This category is a little up in the air, but Guzman and Meinzer say the frontrunner is Laura Poitras’s “Citizenfour.”

“I think everyone was really impressed by that,” Guzman says. “I thought it was OK, but I think the Oscar’s definitely going to go to that.”

Even though this is a big indie year for the Oscars, Meinzer says the Academy overlooked a lot of smaller films like “In Secret” and “Belle.”

“There were so many movies I just loved this year that nobody was even going to notice,” she says. “[They] didn’t get all the love that I wish they would have.”

Even though it was nominated for Best Picture, the pair agree that “Selma” should have been nominated in more categories.