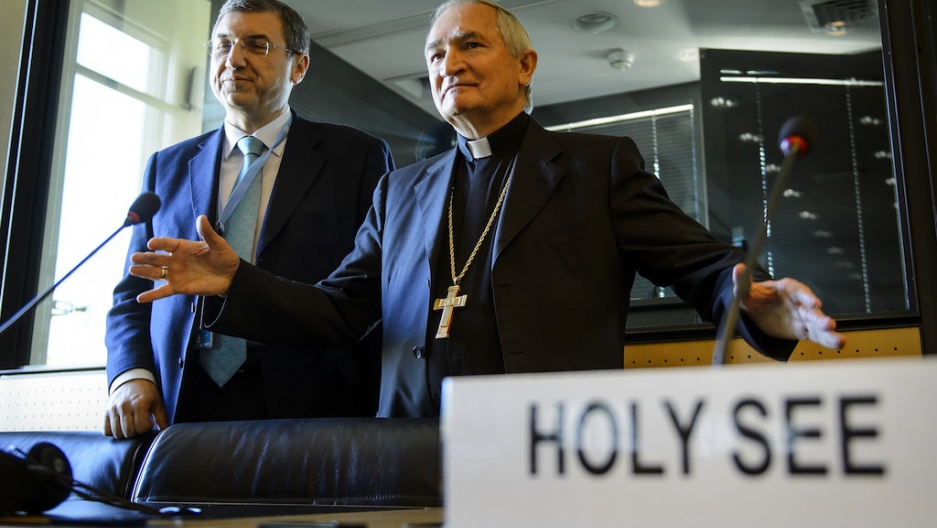 The Vatican's Ambassador to the United Nations Monsignor Silvano Tomasi (R) gestures next to Vatican Secretary of State Professor Vincenzo Buonomo (L) during a hearing before the United Nations (UN) Committee Against Torture on May 5, 2014, in Geneva. A UN anti-torture watchdog began a two-day grilling of the Vatican on its efforts to stamp out child sex abuse by priests.
Credit: Fabrice Coffrini
Share

The Vatican’s protection of bishops complicit in recycling clergy sex abusers is a front-burner issue for Alberto Athié, one of Mexico’s most respected public figures.

Last July, when Pope Francis met with abuse survivors in Rome, Athié posted an open letter asking the pope to dismiss Mexico City Cardinal Norberto Rivera for his defense over many years of the long-accused pedophile and founder of the Legion of Christ religious order Father Marcial Maciel.

Athié’s manifesto, signed by 128 abuse survivors, lawyers and supportive groups, called for reforms in the way church leadership handles abuse cases — and the loophole that gives bishops full discretion and has kept Pope Francis from making significant progress in his efforts to create a “zero tolerance” policy.

“They know that such behavior existed within the institution, and the [internal] mechanism is precisely what prolonged the abuse,” Athié told GroundTruth in an email this week. “The damage caused by bishops, cardinals and the Holy See for years of protecting abusers must be confronted.”

Athié argues that Rivera bears responsibility beyond the Maciel case, which stained the tenures of Pope John Paul II and his successor Pope Benedict.

Athié singles out Rivera’s handing of the case of Father Nicolás Aguilar, who in the 1980s moved between Mexico and Los Angeles — trailed by accusations known to Rivera as well as Los Angeles Cardinal Roger Mahony, as lawsuit documents have since shown.

Aguilar has disappeared in Mexico with pending arrest warrants in both countries. He eluded police in Los Angeles in 1987 after a tipoff from chancery officials.

In Los Angeles, eleven of Aguilar’s estimated 26 victims agreed to negotiated legal settlements last February with the archdiocese in the range of $500,000 per victim, according to media accounts and legal sources.

The Congregation for the Doctrine of the Faith (CDF) is broadening its canon law tribunal to consider charges against bishops. But cardinals are Princes of the Church. Cardinals elect popes.
How much weight — if any — will a Vatican forum give to voluminous civil findings against the likes of Rivera and Mahony? Cardinal Bernard Law suffered no penalty in the Vatican for the damage he left in Boston.

Papal interventions in Peru, the Dominican Republic and Spain

Pope Francis has spoken out boldly for victims, while buying time for a a a stronger standard of justice for bishops and cardinals.

The CDF’s 2011 “Circular Letter” to bishops calls for them to cooperate with secular authorities while maintaining historic leeway under canon law. The CDF as the church’s legal arena does not have the powers of an independent judiciary that relies on open jury trials.

The CDF protocols give bishops the final call on whether a priest is removed, unless he is criminally prosecuted. Most who are removed do not leave the priesthood.

Francis, however, took an important step with a 2013 motu proprio (by his own hand). It promulgated a new church law that specified criminal penalties for lay or clerical personnel including Vatican cardinals and papal diplomats who are proven guilty of money-laundering and child abuse.

The law has shown some teeth.

In 2013, just two months after announcing the law, Francis defrocked a Peruvian bishop, Gabriel Miranda Melgarejo after a CDF investigation of allegations that he abused youths. Laicizing a bishop is the most extreme penalty a pope impose upon a member of the hierarchy and it is exceptionally rare.

Ousted by the pope, Miranda has not been prosecuted in Peru.

The Vatican also defrocked the former nuncio, or ambassador to the Dominican Republic, Archbishop Josef Wesolowski, for sexually abusing youths on the island, after a CDF secret proceeding. Now a layman shorn of diplomatic immunity, Wesolowski sits under house arrest awaiting a Vatican city-state criminal proceeding and potential extradition to face criminal charges in Santo Domingo.

Francis made a more personal intervention several months ago, responding to a letter from alleged abuse victim David Ramirez Castilo of Grenada, Spain. The pope telephoned Ramirez, told him to report the charges to the bishop, and told the bishop to investigate.

That move emboldened Spanish prosecutors, who indicted a priest as part of an alleged sex ring with several victims. A court in Grenada has dismissed charges on nine other implicated clerics due to the statute of limitations.

“This case never would have come to light if the pope hadn’t intervened,” journalist Amina Nassaer told Raphael Minder of the New York Times.

The US Conference of Catholic Bishops adopted the most stringent protocols on dealing with clergy sex abusers in 2002. But the conference has no method to enforce its own standards on those who ignore them.

Where should sex offenders live? Who supervises them? How does the tradition of sheltering pedophiles stand up against Vatican policy, such as it is, toward victims?

Countless bishops have escaped judgment, other than as defendants in expensive civil lawsuits for concealing predators who left a trail of human damage. The Vatican has no procedure against such men.

The CDF is investigating Kansas City, Missouri Bishop Robert Finn, who was given a suspended sentence after a criminal misdemeanor for failure to report to authorities a priest with child pornography. The priest has since gone to prison.

“Bishops’ conferences can deny membership or tell people like Finn, or Cardinal Roger Mahony, that they’re not welcome at the meetings,” says SNAP director David Clohessy. “But they don’t. It’s frustrating to read about ‘new procedures’ being drawn up for ‘holding bishops accountable’ when there are plenty of ways to oust a complicit prelate.”

The lack of a consistent, enforceable global policy, as borne out in the Philippines, Mexico, the CDF loophole and cardinals’ immunity, is like a cadaver in the parlor for O’Malley and the Pontifical Commission for the Protection of Minors.

Justice is a pendulum cutting deep in the lives of priests and nuns who have taken public stands against bishops and religious order superiors on behalf of victims.

Father Bruce Teague of the Springfield, Mass. diocese, was abused as a boy by a pastor in Dorchester. After dealing with his trauma over many years he forged ties with other survivors, speaking out against bishops. As a priest, he stood at the grave of his perpetrator, offering forgiveness.

Teague is prominent in the small society of church whistleblowers.

“A priest would get up in the morning, go down and say Mass, molest a child, come up and have breakfast. How could that be? I still can’t understand it at all, but that’s what happened, over and over again.”

These words of Sister Sally Butler, who has lived and worked with Latinos and blacks in a Brooklyn housing project for 45 years, come from a powerful new film, “A Matter of Conscience: Confronting Clergy Abuse.”

Produced by Susan and John Michalczyk, the documentary profiles religious whistleblowers, nuns and priests caught in a crisis of conscience with their bishops, akin to what the papal advisory commission faces with the CDF.

Sister Butler uses a motorized wheelchair, greeting project dwellers she has known for years. In 1993, she and two other nuns learned that three priests they trusted had for years sexually assaulted children from families they considered extensions of their own.

The diocese removed the priests after the sisters reported them. No one was prosecuted; the black and Latino families went into a freefall — no counseling, no compensation. One boy set tried to fire to the church. The church has since closed, not for damage but in a cost-saving downsize process. After the Boston scandals in 2002, Butler joined a circle of church insiders, priests and nuns, who became whistleblowers.

“And there are compelling forces pulling you one way or another,” Butler says in the film. “One is a sense of loyalty that you have to your order or to the church; but then there’s that dreadful anger at betrayal of children and their families. This has affected everybody. So there comes a turning point when you realize that you’ve got to do the right thing no matter what.”

Athié of Mexico City wants a Truth and Reconciliation Commission for the church’s abuse crisis, on the model by Archbishop Desmond Tutu as South Africa moved beyond the apartheid system of racial subjugation and institutionalized violence.

A well-placed Vatican source said on background that a TRC approach is impossible. If bishops spoke truthfully and apologized, they would further incriminate themselves and the church in litigation.

As the pope seeks a culture of reconciliation, the crisis he inherited has several prongs:

The barrier facing O’Malley and the abuse commission is how to provide Francis with a wedge, a solution that draws on the weight of public information, but using methods outside the box of the legal saga.

Otherwise, the commission will issue a report and the CDF will maintain its loopholes and control of the Vatican machinery.

One area where the Vatican can engineer a change is financial compensation for victims.
If Pope Francis authorized an international fund to compensate victims unable to gain legal redress, overseen by a neutral expert of impeccable reputation, the establishment of standards allowing survivors with proof of the abuse would position the Vatican and local churches, in at least some countries without a history of such lawsuits, as an ally in providing belated justice to victims.

Combining an international fund with some modified form of a Truth and Reconciliation Commission, even with the bad publicity that would come from such testimony, would in the long run work better than the stanch-the-dyke approach that the hierarchy and two previous popes have taken. Justice is a servant of truth; and the truth holds a better chance of freeing the church of its self-made shackles than church policies that have failed many times over.

Jason Berry is GroundTruth religion correspondent. His books include Render unto Rome, Vows of Silence, and Lead us Not Into Temptation. The Fund for Investigative Journalism provided assistance for this report.