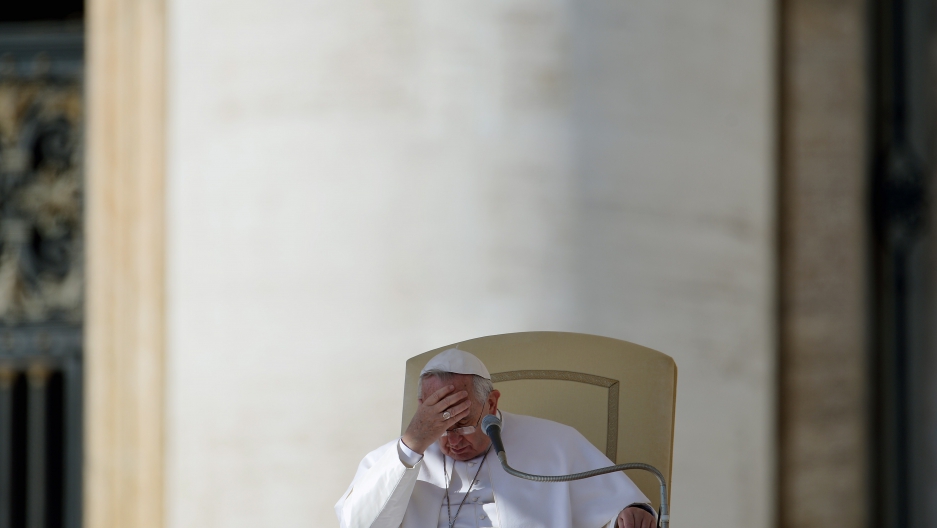 As clergy child abuse scandals jolt the church, Pope Francis has defrocked predatory bishops from Peru and Poland after secret Vatican proceedings. He also intervened on a victim’s behalf in Spain, which emboldened prosecutors to indict a priest who was part of an alleged ring of clergy abusers in the Grenada diocese, according to press reports.

“A zero tolerance approach must be adopted,” Francis told reporters on an airline press conference from Tel Aviv to Rome last May, a sentiment he has backed with action in the intervening months.

But the 17-member papal advisory commission on the abuse crisis faces a glaring loophole over bishops who have sheltered predators — a loophole that creates a tripwire to Pope Francis’s stated goal.

“There’s no place in ministry for those who abuse minors,” Francis wrote in a Feb. 5 letter to the world’s bishops. “Everything must be done to rid the Church of the scourge of the sexual abuse of minors and to open pathways of reconciliation and healing for those who were abused.”

Francis entreated the bishops to see that instructions from a 2011 Congregation for the Doctrine of the Faith (CDF) letter are “fully implemented.”

But the 2011 CDF “Circular Letter” to bishops on protocols for abusive clerics has policies that have already failed. The 2011 document, signed by then-CDF prefect Cardinal William Levada and his undersecretary Archbishop Luis F. Ladaria, tells bishops to follow civil and canon law “as thoroughly as possible.”

“The return of a cleric to public ministry is excluded if such ministry is a danger for minors or a cause of scandal," the document reads. It is the bishop who decides if danger or scandal exists.

“In fact, this is what bishops have always done,” BishopAccountability co-director Anne Barrett-Doyle told GroundTruth. “The CDF sees a bishop as judge and jury. He can forgive a guilty priest if he wants to after some clinic stay, and put him back in the saddle. That’s what the American bishops did for decades until it blew up on them.”

The history of the crisis in Ireland, North America and Australia is one of bishops who risked reassigning known predators who then found fresh victims. In reaction to the explosive media coverage of 2002, the American bishops adopted new norms, or guidelines.

“When even a single act of sexual abuse by a priest or deacon is admitted or is established,” the 2002 norms state, “the offending priest or deacon will be removed permanently from ecclesiastical ministry, not excluding dismissal from the clerical state.”

That standard has proved difficult for some US bishops, as continuing scandals show. In many other countries, standards are more lax.

Depth charges from the Philippines

A new BishopAccountability report, “Sexual Misconduct among Priests in the Philippines,” dissects the CDF 2011 policy on the heels of Francis’s remarkable trip to the islands.

“We have identified 12 cases of allegedly abusive priests that raise immediate concerns about child safety,” Barrett-Doyle and co-director Terry McKiernan said in a letter with the report to a new member of the Pontifical Commission on the Protection of Minors, Filipino psychotherapist Gabriel Dy-Liacco.

“At least half of these [dozen] priests are still active in Philippine parishes, and none appears to have been laicized,” they wrote.

The Boston-based researchers identify two priests as repeat offenders from America, noting that the Philippines bishops’ conference knew about their backgrounds.

Rev. Joseph Skelton, Jr. “works with young people in the Philippines,” despite a 1998 conviction in Detroit for sexual misconduct with a 15-year-old boy, states the report.

Rev. Manuel Perez “Benilda” Maramba, a Benedictine priest, is listed as faculty at University of Santo Tomas Conservatory of Music in Manila, despite three victim allegations from his time in Las Cruces, New Mexico.

A third priest admitted he sexually assaulted boys in the 1990s, while a fourth was “quickly transferred to his [local] bishop’s residence in 2011 after a 17-year-old girl filed rape charges,” according to the BishopAccountability report.

McKiernan and Barrett-Doyle criticize Cardinal Luis Tagle, the charismatic archbishop of Manila, who many see as a potential successor to Pope Francis. Their letter states:

“In February 2012, Cardinal Tagle said that new guidelines were being finalized for presentation to the Congregation for the Doctrine of the Faith. As of January 2015, this updated protocol had not been published. According to a 2013 book by Philippines journalist Aries Rufo, ‘Altar of Secrets: Sex, Politics, and Money in the Philippine Catholic Church,’ the Vatican has rejected the new draft because it still contains the provision allowing priests to father one child in ministry — what is scathingly called the ‘one child quota system’ by Archbishop Emeritus Oscar Cruz of Lingayen-Dagupan, a public critic of his colleagues' response to clergy sexual misconduct.”

The Philippines are one flashpoint in a global issue on which the CDF assumed greater authority to review cases of accused clerics in 2001, under a decision by Pope John Paul II at the urging of then-CDF prefect Cardinal Joseph Ratzinger.

But the “Circular Letter” weakens the role of lay review boards to “consultative bodies of review and discernment...which cannot substitute for the discernment and [governance] of individual bishops.”

The Vatican engages in little oversight of bishops, unless they speak against CDF moral teachings on celibacy, women priests or politics-of-the-body issues like birth control and gay marriage.
Levada’s tumultuous experiences registered in the 2011 document.

He has a dubious distinction as the only American bishop to be sued —successfully — by a priest who reported a suspected predator to law enforcement.

In 1997 Levada suspended Father Jon Conley, himself a former federal prosecutor, for calling San Francisco police after Conley saw his own pastor make advances on a boy working the parish switchboard. Levada suspended Conley for insubordination. The boy’s family sued, the pastor testified that he sought sexual gratification by wrestling with boys and the archdiocese ultimately paid the family a $750,000 settlement.

Conley sued as a whistleblower under California law. The archdiocese made an apology and a settlement for “prefunding” Conley’s retirement.

The CDF’s 2011 loophole tracks Levada’s practice as archbishop of San Francisco, when he hid information from his own lay review board.

Levada relied on Rev. Gregory G. Ingels to give canon law advice to his advisory committee on abusive priests, until Ingels was accused of abusing two youngsters. In a 2003 recording that police taped, Ingels told one victim, “What I did to you was terrible.”

Levada hid the accusations against Ingels from his review board, while the priest lived at the Menlo Park seminary with the retired archbishop, John Quinn.

Levada in his tenure removed the chaplain of the San Francisco 49ers football team, the rector of the cathedral, the seminary dean of students, the chaplain of the police department and the head of Catholic Charities — all for sexual contacts with youth. Ingels was last listed as “absent, on leave.”

Psychologist James Jenkins, chair of the lay board, resigned in protest over the Ingels scandal, several months before Levada was elevated to Rome by Pope Benedict in April 2005.

Jenkins accused Levada at the time of blocking the public disclosure on 18 of 40 priests accused of child molestations. Nine were no longer in public ministry. Jenkins looks back on the lay board as “an elaborate public relations scheme.”

Although Levada as a young theologian had worked for Cardinal Ratzinger years earlier at the CDF, he was not known as a theological scholar. Jenkins believes Levada became the first American CDF prefect “because he had dealt with abusive priests and a Vatican perception of his ability to keep control and manage the ever-burgeoning scandal.”

Whatever the reason for Benedict’s choice, Levada as a cardinal had no lay review board to make the job harder. The "Circular Letter" he sent the world’s bishops was weaker than the US bishops’ protocols.

Levada, 78, is now retired and eligible to vote in a papal conclave until his 80th birthday.

Is the pontifical secret vow necessary?

In testimony last year to a UN Committee, the Vatican revealed that 848 priests had been laicized, or defrocked, while 2,572 priests were given lesser penalties. Abuse survivors charge that the larger number, two-thirds of those accused, are able to melt into a supportive church.

The CDF, meanwhile, is expanding its purview for a procedure to weigh accusations against bishops accused of abuse — or gross negligence in recycling predators.

“What we’ve seen in Philippines and elsewhere,” Barrett-Doyle told GroundTruth, “is bishops still acting irresponsibly, keeping abusers in ministry with impunity — and in full compliance with the CDF.”

Francis’s Feb. 4 letter to bishops says that victims “have every right to turn to the Church with full confidence, for it is a safe and secure home. Consequently, priority must not be given to any other kind of concern,” such as scandal prevention.

Forging a policy of neutral justice is the challenge to Boston Cardinal Seán O’Malley and the Pontifical Commission for the Protection of Minors. O’Malley told reporters in Rome recently that “there have to be consequences” for negligent bishops, a point he has made before.

But the Vatican, which has no open jury trials as in Western courts, has long operated on a theological belief in apostolic succession, that each bishop is a spiritual descendant of Jesus’s apostles — a tradition warped by hubris in giving facto immunity to bishops and cardinals.

Countless bishops have escaped judgment, other than as defendants in expensive civil lawsuits for concealing child predators who left a trail of human damage and huge legal settlements.

Cardinal Bernard Law resigned his archbishopric in Boston in 2002, and after an 18-month hiatus with nuns in Maryland vaulted to Rome as pastor of a great basilica and a board member of Vatican Congregations.

Law’s elevated status in the Roman Curia lay in part with the Pontifical vow of secrecy, to prevent scandal, that each cardinal makes to the pope on receiving his red hat. The cardinals’ oath offers a logic for cover-ups and pathological secrecy by defending “the good of the church.”

But lying has a corrosive power, like acid eating through red silk robes.

Is such a secrecy oath necessary?

“The weight of the pontifical secret is heaviest on those attempting to administer justice, not on those whose actions have destroyed it,” said Jennifer Haselberger,” a Twin Cities canon lawyer in a paper last summer in Chicago to a SNAP conference.

Haselberger resigned in 2013 as canon lawyer for the St. Paul archdiocese, accusing Archbishop John Nienstedt and other church officials of refusing to act on known abusers, and storing pornography amassed by clerics for eight years. In an affidavit for a victims’ lawsuit, Haselberger accused the archdiocese of “a cavalier attitude toward the safety of other people’s children.”

Facing a barrage of lawsuits, the archdiocese has taken Chapter 11 bankruptcy protection and is trying to negotiate victim claims.

The Vatican has taken no action against Nienstedt.

Jason Berry is GroundTruth religion correspondent. His books include Render unto Rome, Vows of Silence, and Lead us Not Into Temptation. The Fund for Investigative Journalism provided assistance for this report.