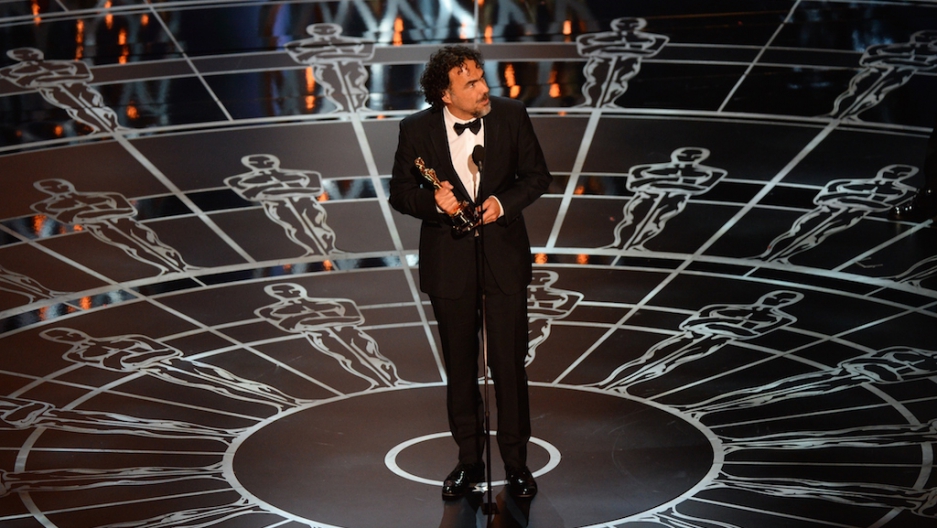 Editor's note: This article was originally published in February 2015. Birdman's Mexican director, Alejandro Gonzalez Inarritu, and cinematographer, Emmanuel Lubezki, both won Oscars at the 2015 Academy Awards. They each won again this year for The Revenant.

MEXICO CITY — To the rolls of jazz drums and flying camera shots, Michael Keaton race-walks through crowded New York City in his tight underpants in a bizarrely hilarious scene of the dark comedy “Birdman.”

It’s a risky experimental combo. But Mexican director Alejandro Gonzalez Inarritu pulled it off on such a scale that his movie won four coveted Oscars Sunday, including the big enchiladas of best director and best movie.

The success of “Birdman” means Mexicans have won best director for two years running. In 2014, Alfonso Cuaron won for “Gravity,” his groundbreaking sci-film film that featured Sandra Bullock floating around a junkyard of orbiting satellites and made a whopping $716 million at the box office.

"Birdman" also won for best original screenplay writing and cinematography. It was shot by Mexico's Emmanuel Lubezki, his second Oscar in a row after grabbing best cinematography for “Gravity” last year.

So who is this band of Mexican artists and how did it fight to the top of one America’s most competitive industries?

Directors Gonzalez Inarritu, Cuaron and del Toro have become known as the “Three Amigos,” also the title of a book about the success of their “transnational filmmaking.” But the group extends beyond directors to the cinematographers Luzbeki and Prieto and others, including Oscar-winning production designer Eugenio Caballero.

Together they form a generation of filmmakers and friends who worked and studied together. Hailing from largely upper-middle-class families in Mexico City and Guadalajara, they began making movies when the Mexican industry was at a low in the late 1980s.

“There was no variety of films and few options for talent. The industry was dominated by telenovelas and cheaply made films about escort bars,” says Arturo Aguilar, a Mexican film critic. “But [the Amigos] began making new interesting films about issues such as HIV, experimental horror films or dramas with different storytelling techniques.”

Pioneering this “New Mexican Cinema,” the Amigos worked their way into Hollywood in the 1990s.

“It was an era of globalization of filmmaking. There was an openness in Hollywood to new and foreign talent that you didn’t find in the '70s or '80s,” Aguilar says.

More from GlobalPost: 7 must-see foreign films that didn't get an Oscar nod

The Amigos soon stood out by bringing new ideas to the silver screen. And as they got bigger budgets, they didn't stop experimenting, but broke into even crazier terrain.

Cuaron made 80 percent of “Gravity” with computer graphics and Bullock acting inside a mechanical rig. People warned him it wouldn’t work.

“Birdman” is made to look like a feature-length single take via revolutionary filming and editing.

Their upbringing also adds a new flavor to the American movie potpourri. Films including “Birdman” and “Pan’s Labyrinth” incorporate a mix of magic and tough reality, reminiscent of the magic realism in Latin American literature. Others such as “Children of Men” and “Babel” show a more cynical view of a tough and corrupt world than the more typical moral optimism in Hollywood.

Touches of Mexican humor also sprinkle films. Aguilar says the opening of Cuaron’s “Harry Potter” episode “The Prisoner of Azkaban,” in which Harry plays under the sheets with his magic wand, is a likely nod to Mexican double entendres.

However, in other aspects, the Amigos' films simply express their ideas as individuals, and have international resonance. None of them has made a film back in Mexico in some years, and there is no news that they will any time soon.

“They have become a source of pride for Mexico, but they are not really doing Mexican cinema; they are making Hollywood movies,” Hecht says. “It is logical that much of the best cinema talent in Mexico will go to Hollywood. And now they are working with $100 million budgets, it is hard to give that up and come back to Mexico.”