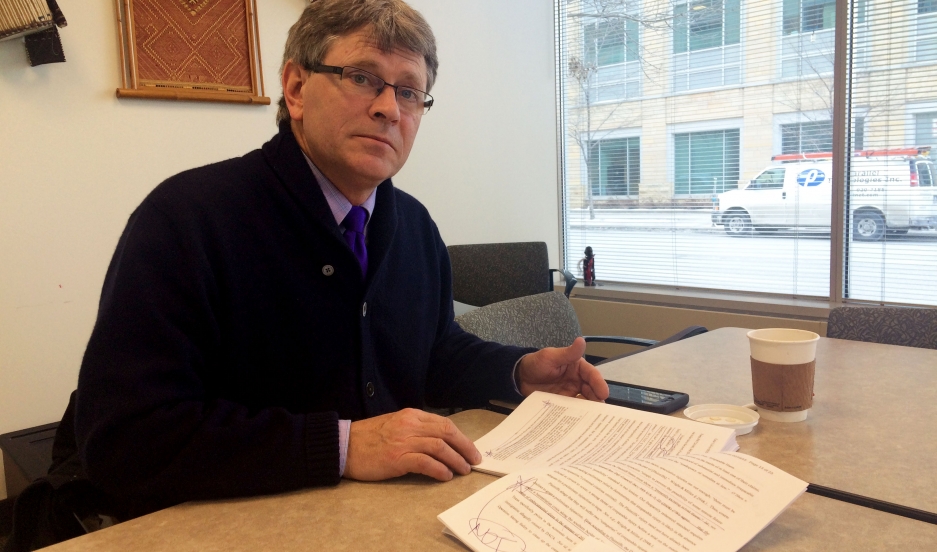 Professor Virgil Wiebe read the 123-page decision that halted President Obama's executive action on immigration this week. He points to footnote 105 of the opinion, written by US District Court Judge Andrew Hanen from the Southern District of Texas, in Brownsville. It reads: "This Memorandum Opinion and Order does not rule on the substantive merits of DAPA's legality."

Law professor Virgil Wiebe is bullish: This week's court ruling that halted some of President Barack Obama's executive actions on immigration will be overturned, he says.

“The reason why there's a lot of confidence that the ruling will be overturned is that, for better or worse, courts and Congress have long said, in essence, the president can do whatever he damn well pleases when it comes to immigration law enforcement,” Wiebe says.

That's good news for his clients. Wiebe is a law professor at the University of St. Thomas in Minneapolis, where he runs an immigration law clinic that provides services free of cost. He works with local churches to reach out to potential applicants for temporary relief from deportation, help them understand the program and avoid scams.

President Obama's executive actions expand the Deferred Action for Childhood Arrivals (DACA) program to include undocumented immigrants of any age who entered before age 16 and have lived in the US continuously since 2010. It also begins Deferred Action for Parents of Americans and Lawful Permanent Residents (DAPA) program. Both programs require criminal background checks and for immigrants to pay taxes.
More from USCIS

Monday's ruling in Brownsville, Texas, had effectively halted the program, which provides a broader group of undocumented immigrants three-year work permits and a reprieve from deportation. On Friday, the White House said it would appeal to overturn that ruling and ask for an emergency order to lift the injunction on the program. While the legal battle might change the timeline for Wiebe's outreach, his message to undocumented immigrants is clear: Keep preparing if you think you are eligible for the extended Deferred Action for Childhood Arrivals (DACA) and Deferred Action for Parents of Americans and Lawful Permanent Residents (DAPA) programs.

Wiebe spoke with Global Nation about the Monday ruling and what it means for undocumented immigrants.

What does the court ruling in Texas mean for your clinic? Does it delay or derail your plans to reach out to immigrants?

The court ruling in Texas may delay the scheduling of community meetings, but it's not going to delay our work or the work of community groups in reaching out and informing people about what's going on. So one message that needs to be clear to people who believe they qualify is to continue collecting the documents that they need to prove their presence here before 2010, and their relationship to a legal permanent resident or US citizen. We're confident this injunction will be overruled eventually. The timing is in question, but it seems, in my read of the law, that the administration will win this case.

How long do you think it will take for the administration to overcome this ruling?

In talking with colleagues around the country, the timing can be on one of two tracks. Option number one is to apply for a stay of the injunction, which could take anywhere from 10 days to a month. There are groups pressuring the administration to take that step. The judge has put up a stop sign; an emergency stay would say, "You have to take down that stop sign right now." You can keep the case going, but we're not going to stop the process. [The White House announced Friday that it would seek to stay the order, the shorter of these two options, on Monday. They also plan a formal appeal of the decision.]

The second option is to simply appeal the decision of the judge. In that situation the stop sign stays up. And that could take six months.

What are you and your colleagues telling prospective applicants?

One client who has been here for over 10 years and has two US-citizen children is in the process of applying for a different form of relief, which is on appeal. We have told her to start gathering documents — get the birth certificates of her children and proof that she's been here since 2010 — but also put money away for the fee.

For someone living at the poverty line, coming up with the hundreds of dollars necessary to pay the fees that ultimately fund the program is the issue. We represented a young man who was 2012 DACA-eligible. He was in school and wasn't working and got in some trouble with the law. His parents were just scraping by. We filed for a fee exemption and were denied. So he wasn't actually able to apply for DACA because he couldn't afford the fee. Fee exemptions are difficult to get. You essentially need to prove that you are homeless or have a debilitating illness. [The total fee to apply for DACA is $465 and the DAPA fee will likely be similar.] If you're applying for a lasting immigration benefit, like naturalization or a green card, getting a fee waiver is a bit easier. You still have to show that you have very limited income, but it's not nearly as difficult as getting a fee exemption under DACA and, I imagine, DAPA.

What do you want immigrants to know about extended DACA and DAPA in light of the Texas ruling?

On footnote 105
Virgil Wiebe on the Hanen opinion

First, don't forget that the 2012 DACA is not affected by this court ruling. As children age into that, they are still eligible to apply. Second, the other executive actions taken on Nov. 20 are still in place, including the memos about removal priorities. It's very clear that if you are DAPA-eligible, you are not in a priority category for removal. Even though you're not able to apply and get a work permit, you are not a priority category for ICE to come looking for. Third, don't lose hope about DAPA and continue preparing to send in an application when you're ready.

It's interesting that Judge Hanen buried in footnote 105 a statement that says: "This Memorandum Opinion and Order does not rule on the substantive merits of DAPA's legality." There's a lot of heat in this decision, clearly expressing Judge Hanen's displeasure with how the administration enforces or doesn't enforce immigration law. But in footnote 105, it says, "I haven't decided that."

If it's not ruling on the merits of the program, what is it ruling on?

The ruling does two things. First, it allows the lawsuit to go forward saying that the state of Texas — and that's the only state he ruled on — has standing. He is saying that there's a connection between the president's actions and potential harm to Texas because it's going to cost money to give people [who get legal documentation] driver's licenses. The second piece, which is quite narrow, says that unless this stops now, that harm will be irreparable and immediate. There's a phrase in the decision that "there will be no effective way of putting the toothpaste back in the tube." They'll apply for driver's licenses, the state will be out that money and, if in the end Texas wins, you can't get that money back.

Temporary injunctions are usually for really serious harm, often rising to the level of someone is going to die if we don't do this injunction while the underlying case is decided. This decision doesn't say that what the president is doing is illegal or unconstitutional. It says that maybe it is, and while we decide that, I'm going to stop the program.

The reason why there's a lot of confidence that the ruling will be overturned is that, for better or worse, courts and Congress have long said, in essence, the president can do whatever he damn well pleases when it comes to immigration law enforcement. Some of these governors don't like that. There are 27 states involved on one side, but on the other there are about a dozen states, mayors and local law enforcement that support the action. The judge looks only at the deficits that might be created. There are also a lot of documents submitted about the economic and public safety benefits. Much in the judge's order can be contested. The question will be whether the administration wants to contest it slowly or quickly.

In your view, do arguments against the legality of the extended DACA and DAPA programs have any merit?

As part of a group of about 100 other legal scholars, I signed on to a letter saying that the president has power beyond what he exercised in the executive action. I think those arguments are still strong and valid. The basic argument that the plaintiffs are making about the executive action is that this is so big, and that the president is giving the potential for work permits to so many people that it has gone beyond the exercise of discretion and passed into the realm of rule-making. The reality is that the discretion that the president has to give people work permits isn't based on numerical size. It's based on his and the administration's best judgment of how to use the resources provided to them.

The administration has been very careful and very clear that these are guidelines to help decide whether or not to give someone deferred action. They are case by case; they are discretionary. If I send in an application and it's denied, there's no place for me to go to argue with their decision.