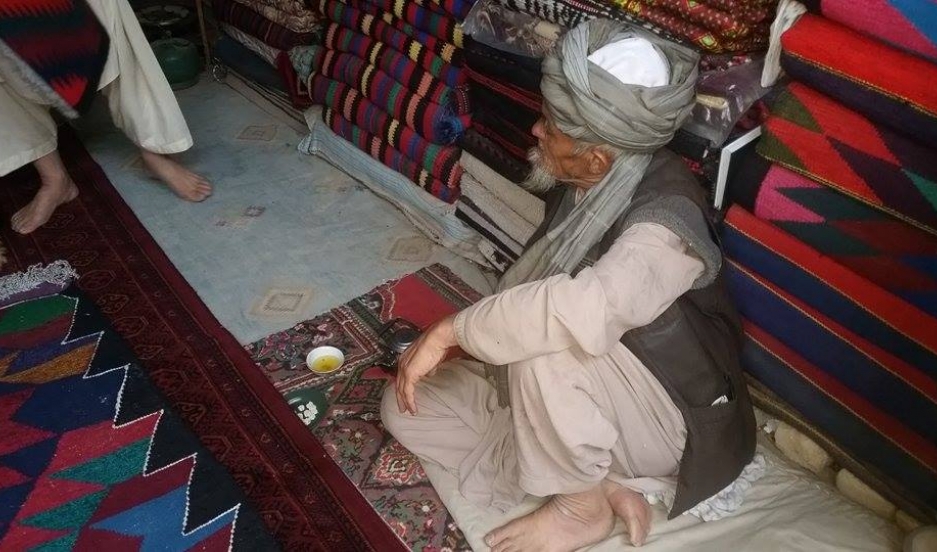 A man selling handwoven rugs in the city of Quetta, in western Pakistan. While the “war rugs” are in demand in Western countries, their value in the local Pakistani market is very low.

Pakistani refugees have been sending messages to Americans for years, woven into the rugs that lie under our feet in flea markets and homes across the country. But we didn't fully understand what they meant until this week, when a listener in western Pakistan decided to help us figure it out.

(This piece was produced through a collaboration between The World’s digital producer, David Conrad, in Boston and listener-contributor Arzak Khan in Quetta, Pakistan.)

Earlier this month, Kevin Sudeith spoke to us about the appearance of drones on traditional hand-woven rugs made in Pakistan and Afghanistan.

The Minnesotan recalled seeing his first “war rug," with its traditional border surrounding images of tanks, helicopters, grenades and rifles, on the floor of a wealthy Italian jeweler’s house several years ago. Since then, Sudeith has been enamored with the genre and is now one of the leading “war rug” dealers in the US —  admittedly a relatively small community. He sells them in New York City flea markets and through his website, which is one of the most complete sources of war rug images on the Internet.

The drone designs caught our attention and that of several other media outlets, and we leaned on Sudeith's experience to try and explain the evolution of war rugs. But Sudeith confessed his uncertainty about the true motivations of the weavers — he's never actually spoken to one.

“The brass ring for war rug aficionados and experts is to interview the ladies who weave the rugs and understand what made them weave them in the first place,” he said. “And so far that has been impossible — no one has succeeded in doing that yet.”

And that's where the story ended — until one of our listeners showed an interest.

After our story aired, I reached out to my social network for feedback. Arzak Khan, an old friend and a listener of the show, wrote back: “Drones are now more famous than once Rambo was in the region, hence more patterns are emerging on the rugs made here. I will try to find out what motivates the weavers here as it would be interesting to get their version as well.”

Khan lives in the city of Quetta, Pakistan. Located near the country’s northwestern border with Afghanistan, Quetta was home to the Taliban's headquarters during its insurgency in the 2000s. Khan describes it as the “somewhat modernized wild, wild west of Pakistan.”

Khan says it's an obvious move from rugs featuring patterns of tanks and AK-47s in the 1980s to ones featuring drones today.

“When I was growing up, there were pictures of Rambo on buses, trucks, shirts — he was everywhere,” says Khan, referring to the Sylvester Stallone character. Rambo became a popular cultural symbol in Pakistan following the 1988 release of Rambo III. “For kids now, the popular thing to see is drones — they are everywhere.” 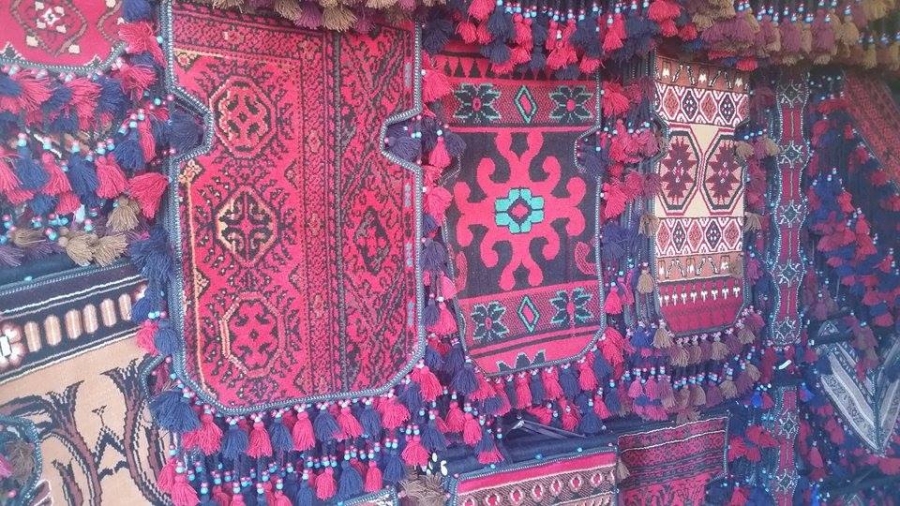 Rugs for sale at a market in Quetta, Pakistan.

But Khan still hadn't heard the voices of the weavers themselves. Doing so is hardly a monumental feat for him: It simply means going to his backyard and asking them — so he did.

Last week, he spoke to about a dozen weavers, all women who ranged in age from 20 to 80. They live just south of Quetta in a refugee camp that formed in the 1980s during the Soviet war in Afghanistan. It's since settled into what Khan describes as a “refugee town” of about 40,000 people.

Far from the supposed mysteriousness that fascinated Sudeith, the rug dealer, Khan found that "the drones are being weaved for a reason." In a region marked by a lack of freedom of expression, he says the rugs have become a way for some weavers to voice their opposition to the drone war.

“One of the older local weavers, now in her 80s, told me that the reason for weaving drones on carpets by women here is to show to the West that their brutal killing machines are always under our feet," Khan says.

Most of the victims from drone attacks in Pakistan have been civilians. According to a October 2014 report from the Bureau of Investigative Journalism, a news organization based at City University, London, more than 1,000 civilians were killed in Pakistan by American drone strikes between June 2004 and October 2014 — more than one-fifth of them children. Only 12 percent of the victims can be identified as militants.

Weavers know that war rugs are going overwhelmingly to Western markets, Khan says, so they use their designs “to express their frustrations and anger” about these attacks to the Westerners who buy them.

There may even be a thematic link between the beloved Rambo and the drones: In Rambo III, the movie that made the action hero a cultural icon in Pakistan, the reckless, violence-solves-all-problems soldier comes to Pakistan to help local guerillas fight the Soviets — but repeatedly endangers the lives of civilians along the way.

Khan is director and co-founder of Internet Policy Observatory Pakistan, an organization that conducts public interest research on Internet policy and regulation in Pakistan. Now he wants to do a formal study on the weavers.

“It is really fascinating,” he says. “We all have these carpets in our homes, but I never paid the designs much attention before. Hearing that these women are using them as a form of expression is ... it’s amazing. The messages are very deep in these rugs, but I wonder how many have neglected these expressions over the years and how few understand.”

We're trying out a new experiment at PRI called StoryAct, aimed at providing ways for people to take concrete action on the stories we report each day. You'll see calls for participation in some stories over the coming months, but if you're from a place we reported on and feel we're missing important perspectives, please reach out to me at dconrad@pri.org or tweet to me @bydavidconrad. I hope this story will be only the first in a series of collaborative projects.