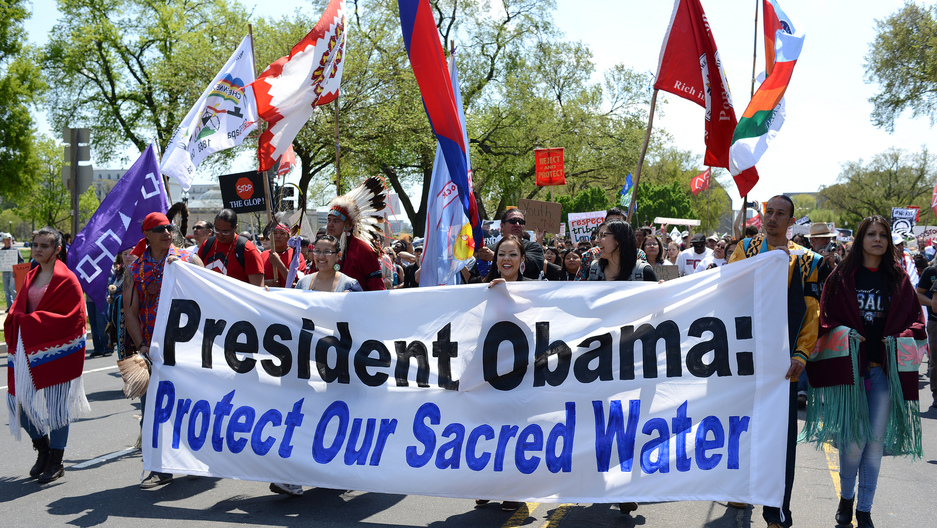 Native Americans march during an anti-Keystone XL protest in Washington on April 26, 2014.

The Keystone XL pipeline may have divided advocates and lawmakers in Washington, but the controversial project has also united a wide group of Native American tribes whose lands the pipes would cross.

The proposed pipeline would run for 1,179 miles from southern Alberta to the Gulf of Mexico, crossing through six states and the territories of numerous tribes from the Dene and Creek Nations to the Omaha, Ho-chunk and Panka tribes.

These tribal nations say the US government has failed to adequately consult and negotiate the matter with them, despite the direct effect the pipeline’s route would have on their lands

“I think that a lot of tribes are really frustrated at the lack of inclusion in this process that's guaranteed through our treaty rights,” says Dallas Goldtooth of the Indigenous Environmental Network. Goldtooth says their primary concern is that the State Department’s permitting process has overlooked tribal treaties with the federal government.

For example, he says, "the Keystone pipeline passes right through the heart of the Oceti Sacowin Treaty area that was established before the Laramie Treaty back in 1868. A lot of the tribal nations really stick to the wording and negotiated agreements that were made and are treaties and we really encourage the federal government to really stick to those.”

But tribes on both sides of the US-Canada border are also concerned about a range of environmental problems like pollution, accelerated climate effects and potential danger to the tribes' water supply.

As it runs across the United States, the pipeline crosses over the Ogallala Aquifer, which supplies water to Nebraska and surrounding states. The aquifer “provides enormous resources to the agricultural breadbasket of America,” Goldtooth says. “The potential for a spill there is far too great of a risk for not only tribal members but for non-native people to take in this region,” he said. 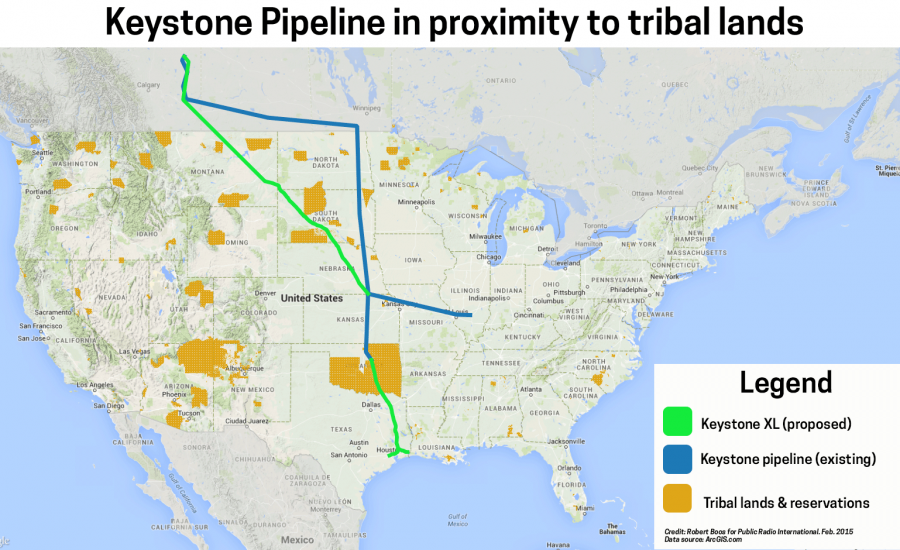 A map showing the proposed route of the Keystone XL pipeline and its path through tribal lands.

The Environmental Protection Agency recently acknowledged that many of the environmental questions surrounding Keystone XL were probably underevaluated — or not evaluated at all. Goldtooth interprets the EPA's report as a critical acknowledgement that the pipeline will contribute to greater emissions and carbon pollution.

“I think that has always been a talking point that proponents of the pipeline have always used — and continue to say: that this will not contribute to greater carbon pollution. But that's just plain not true,” Goldtooth said. “I really do appreciate the EPA stepping forward and making that note.”

Goldtooth feels the native people's lack of inclusion in the Keystone discussion belies a lack of respect. He remembers that, on the occasions that the State Department did consult with tribal groups, those meetings were typically conference calls with tribal representatives gathered in a room, or in-person meetings with low-level State Department officials.

“A lot of tribes just found that offensive, to be plain spoken,” Goldtooth says. “They expect something higher up, given the nation-to-nation relationship.”

The Senate passed a bill approving the pipeline last month, but its prospects are still slim: President Barack Obama has threatened to veto the law, and the Republican majority in Congress lacks the votes to overturn such a move.

But if the pipeline does somehow win approval, Goldtooth says Congress should anticipate a strong response from the tribes along Keystone's route. “Our tribes — the Oceti Sacowin, the Lakota, Dakota and the Nakota nations — are very proud of our political activism," he says.

He mentions that the Rosebud Sioux tribe already has prepared an encampment on a portion of the proposed route, and will increase their presence if the pipeline is approved.

“What we see are fellow native people that are suffering because of [a] continued colonial process of extracting minerals and resources from our communities without our consent,” Goldtooth says. “And so we really want to stand in solidarity, across no matter what border may be, with our indigenous brothers and sisters.”