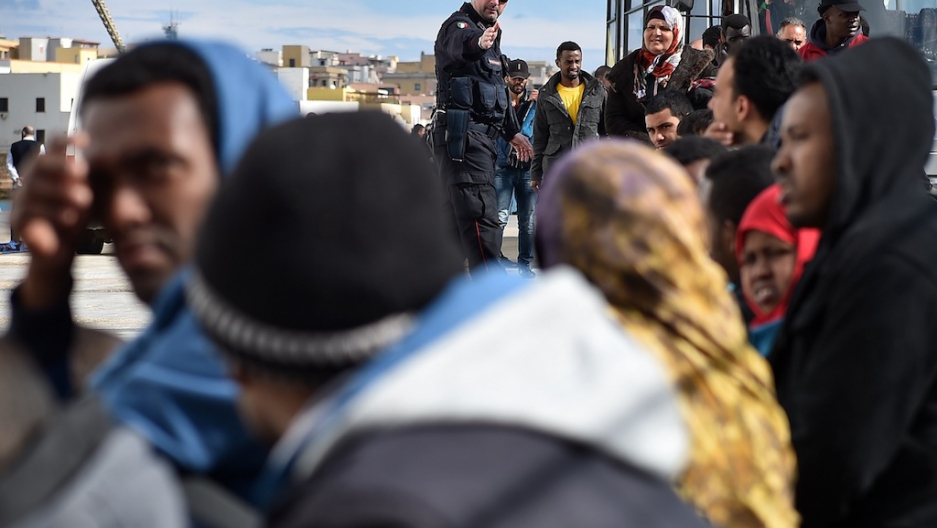 Migrants wait to board a ship on Feb. 18, 2015 in Lampedusa, Italy.
Credit: Tullio M. Puglia
Share

Last year more than 3,000 asylum seekers perished as they strived to cross the Mediterranean Sea to seek a safe haven in Europe, the Geneva-based International Organization for Migration said.

Given the number of deaths along that route in the past month and a half alone, 2015 seems to be on course to be another grim year.

The "fatalities indicate that the toll of lives lost to human smuggling in the Mediterranean may be even deadlier in 2015 than it was in 2014," the IOM warned.

The latest deaths of refugees in the Mediterranean has brought the debate on how the European Union should deal with the crisis back to the fore.

"With only a handful of permanent staff, [Triton] relies on the largesse of member states for equipment and personnel," Overdorf wrote. "It will limit its operations to 30 nautical miles off the coast of Lampedusa, and its primary focus will be border control."

While Triton was only intended to operate for a few months, on Feb. 19 the European Commission prolonged its rescue missions until the end of this year, and gave Italy $15.61 million in emergency funding, Reuters reported.

The United Nations and nongovernmental organizations are calling on the bloc to take tangible steps to save lives.

One of those steps is to implement a "robust search and rescue operation in the Central Mediterranean, not only a border patrol," United Nations High Commissioner for Refugees António Guterres said in a statement following the tragedy.

"Amnesty International is urging EU countries to provide collective and concerted search and rescue operations along routes taken by migrants, to at least the same level as Mare Nostrum," the rights group said.

But for some, the dangers begin even before they embark on their journeys across the Mediterranean, as this video shot last March by GlobalPost contributor Daniel Etter revealed.

The number of people risking their lives to make these perilous sea crossings, however, is increasing.

"The UN refugee agency UNHCR said 3,528 migrants had come by sea to Italy in January alone, up from 2,171 in the same month last year, with Syrians accounting for nearly a quarter," Reuters reported on Feb. 11.

And within the past five days, a massive rescue operation saved the lives of around 2,700 migrants from the Mediterranean, the UN said, according to the BBC.

The violent and unrelenting conflicts across parts of north Africa and the Middle East are forcing scores of people out of their homes.

Italian Foreign Minister Paolo Gentiloni said there's a link between the increase in the number of migrants who have arrived in Italy and the security issues in Libya, Reuters reported.

"The deterioration of the situation on the ground forces the international community to move more quickly before it's too late," the news agency quoted Gentiloni as saying. "There's a clear risk of alliances between Daesh and local groups." Daesh is another name for the Islamic State militant group that has overrun areas in Iraq and Syria — and most recently, Libya.

Even those migrants who manage to arrive safely languish in dismal conditions, rights groups say.

The photos below show migrants at a Temporary Permanence Center in the Italian island of Lampedusa:

For further reading, here's a selection of stories written by GlobalPost correspondents on the EU's migration issues:

Meet the Tunisian fisherman saving the lives of migrants at sea