You've heard Nathan East play bass guitar before. At least it's very, very likely you have. 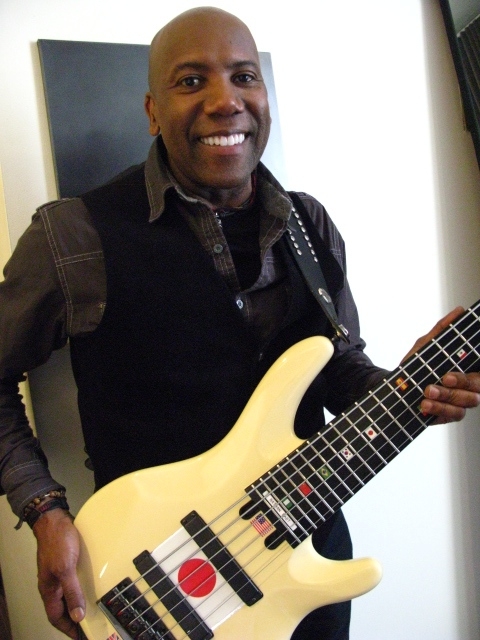 Nathan East and his bass guitar.

East is a session bass player without equal. He's performed on more than 2,000 recordings with a list of artists that includes Michael Jackson — on the "Bad" album — Phil Collins, Kenny Loggins, Al Jarreau, Eric Clapton and hundreds more.

He was even one of the composers of "Get Lucky," a worldwide hit for Daft Punk.

"It's been one of those careers where I just wake up every day and pinch myself," he says.

East doesn't record quite as much as he used to; the best work is in touring, and he's on the road for much of every year. When he travels, his bass guitars include one that's covered with international flags, stickers festooned up and down the neck of the instrument.

East says the first flag was from Japan. "We were doing a show for the relief efforts for the tsunami victims," he says. Adding a sticker just felt like the right thing to do, so he placed one right between the bass guitar's pick-ups.

Once he had that flag on the guitar, he had to add the US flag, too, at the end of the fretboard — "because that's where I live," he says.

So if you catch Nathan East on film, look out for the unassuming player laying down the deepest groove imaginable and see if he's got that bass with him.

"This is turning into my international instrument," he says. "When the camera goes up and down the neck it's kind of cool!"