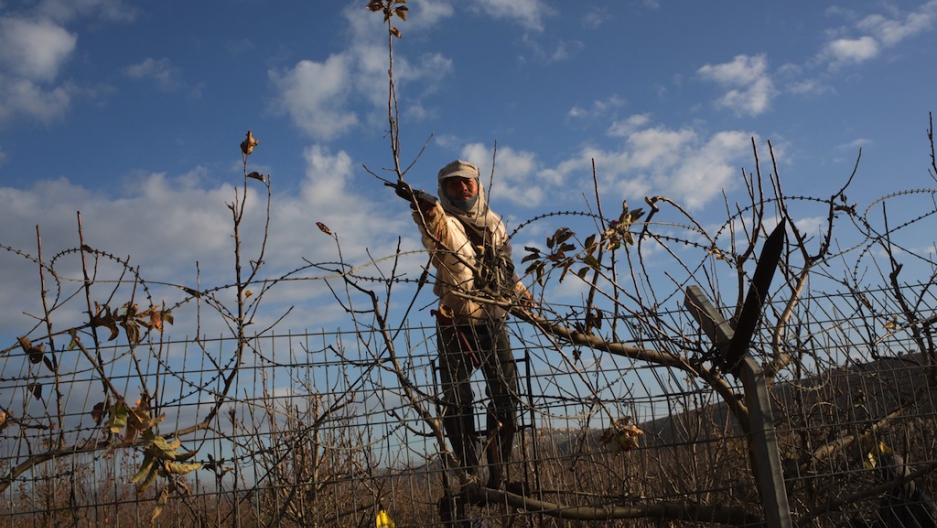 A Thai migrant worker at an apple plantation in the Israeli town of Metula along the Lebanon-Israel border on January 29, 2015, a day after the Israeli military shelled border areas following a Hezbollah attack that left two Israeli soldiers dead.
Credit: Menahem Kahana
Share

Farmers have their own set of complaints: the summer 2014 war resulted in losses for farms close to Gaza, and a harsh winter has affected all of Israel’s farmers. Farmers who export products abroad are feeling the effects of the European economic crisis.

These troubles, and a constant shortage of workers, have been the focus of complaints filed by the farmers' unions to the state of Israel, criticizing the government's lack of defined plans for the agricultural sector.

The people paying the highest price for this situation are not Israeli farmers or European consumers, however, but migrant workers employed in the sector, 22,000 of them from Thailand.

The Human Rights Watch report, done in collaboration with the Israeli labor rights organization Kav LaOved, details human and labor rights violations in farms across the country, mainly due to years of poor government policy.

The findings reiterate a Kav LaOved survey from 2014, which showed that most agricultural migrant workers earn only 70 percent of the wages the minimum wage law entitles them to. Additionally, these workers do not receive vacation days, pension, and other social rights every worker in Israel is entitled to receive.

Under regulations, employers must provide adequate accommodations for migrant workers; however, visits to workers' living spaces showed a very different and much more troubling reality.

Kav LaOved (KLO) representatives met with workers whose employers housed them in iron shipping containers, which leaked during winter and were steaming hot during the summer. Other living spaces included chicken coops, dilapidated warehouses used for chemical storage, and, in one case, a small shed near an open cesspool.

In clear violation of Israeli regulations, workers report insufficient or nonexistent equipment for handling pesticides in the fields and greenhouses. Prolonged exposure to these substances has led to many workers complaining of health problems, including rashes, vomiting, headaches, respiratory distress and fainting.

Workers' accessibility to health care is also restricted, both they work in agricultural areas far from medical facilities and because they don’t speak Hebrew. They also fear punishment for missing workdays.

The new Human Rights Watch report specifically addresses the data released by the Israeli Ministry of Health regarding the deaths of 122 Thai agricultural migrant workers in the last five years. One-third of the deaths are attributed to Brugada syndrome (also known as "sudden night death syndrome"). This most often affects young, healthy people from eastern Asia.  Even though the exact cause of the syndrome is unknown, research shows that exhaustion and stress increase the likelihood of an outbreak.

Thai workers in Israel face strenuous workloads, over 12 hour days, exposure to pesticides and extreme temperatures; conditions that increase their risk of Brugada Syndrome. In a related KLO position paper published last year, different stakeholders called for the authorities to begin an in-depth investigation on the relationship between the syndrome in Israel and the living and employment conditions of migrant workers.

Human Rights Watch has also called on authorities to investigate whether deaths of workers may relate to heat stroke due to being overworked in high temperatures, and not pre-existing medical conditions.

Agricultural workers regularly approach Kav LaOved with complaints about unacceptable living and working conditions. While these complaints are forwarded to appropriate authorities, there has been no response that would result in a significant reduction in labor rights violations.

The total of wages withheld from workers reaches hundreds of millions of shekels. Israel’s ineffectiveness in enforcing labor law to protect migrant workers raises suspicions the government is turning a blind eye to the belief that employers are withholding  workers' wages for profit.

The experience of Kav LaOved, and workers themselves, is that Israel is fruitful ground for the violation of workers' rights. Inaction by the government to vigorous demands for continues to enable employers to profit from labor rights violations.

In the long run, this abuse and exploitation will taint the reputation of Israeli produce. If Israeli farmers and the Israeli government want to protect the sector, they should first start protecting its workers.

Noa Shauer is the coordinator of Agricultural Workers at Kav LaOved-Worker's Hotline, an Israeli nongovernmental organization that campaigns for migrant workers’ rights in Israel. This piece was translated by Daniel Katz.