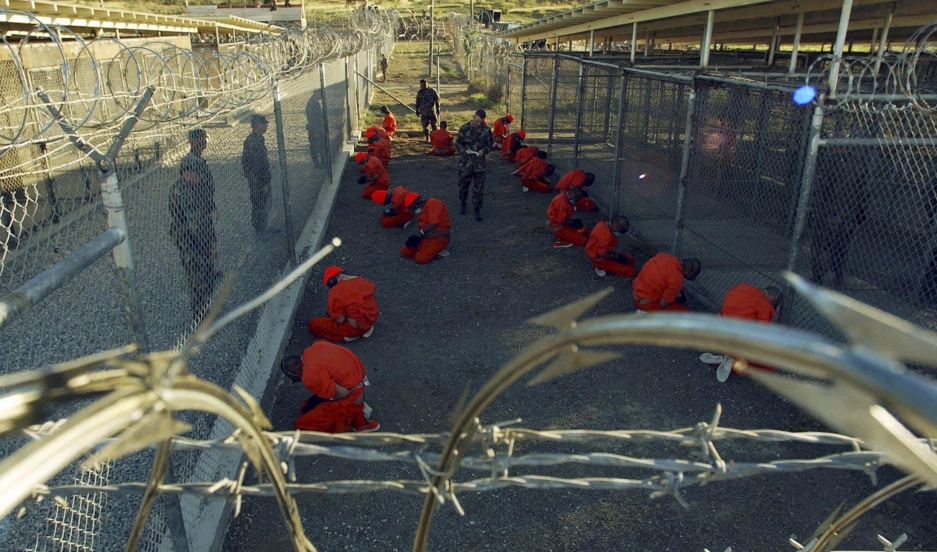 Detainees in orange jumpsuits sit in a holding area under the watchful eyes of military police during inprocessing at the temporary detention facility at Guantanamo Bay's Camp X-Ray in this January 11, 2002 file photograph.

After serving almost two years in a federal prison in Pennsylvania, former CIA officer John Kiriakou, the first agency official to publicly confirm and detail the agency’s use of waterboarding, is back at home in Virginia to complete the rest of his sentence under house arrest.

Kiriakou was imprisoned for leaking classified information, making him the first CIA officer to be imprisoned for leaks. He's also the only person to be held accountable for any kind of wrongdoing linked to the CIA's torture policies.

​Kiriakou was locked up for leaking the name of an operative to a reporter, even though the journalist never published that information. But he says the leak has nothing to do with his incarceration. He maintains the charges were just an excuse to punish him for publicly confirming and criticizing the Bush Administration's ​use of waterboarding and other methods of torture.

“My case was not about leaking. It was about torture,” Kiriakou says. “The CIA never forgave me for going public with the torture program, and they investigated me over the course of four years and just waited until I made a mistake."

As evidence, he points out that government agencies and officials routinely leak information to influence news coverage.

“Washington runs on leaks, whether they’re authorized or unauthorized,” Kiriakou says. “The last three CIA directors have not just leaked classified information, but they’ve leaked the names of covert operatives. There was no harm to national security, and there certainly was no criminal intent. And neither was there harm to national security or criminal intent in my case, yet I was prosecuted and they weren’t. That leads me to believe that my case was not about leaking.”

When President Barack Obama took office in 2009, he was questioned directly about this issue and said the Justice Department would not prosecute CIA officers who believed they were following lawful policies. But three years later, Kiriakou was convicted of violating the Intelligence Identities Protection Act.

Kiriakou was part of the team that captured and interrogated al-Qaeda leader Abu Zubaydah, who was subjected to waterboarding. Kiriakou says he didn’t participate in the practice, but later heard about it from his colleagues at the CIA — and that sparked his doubts.

“Al-Qaeda had promised at the time that they would initiate an attack on the United States that would dwarf September 11,” he says. “I thought that if this was the only way to save American lives, it’s something that we probably needed to do. But the more I thought about it, the more I thought, ‘No, this isn’t what we need to do.’ We were able to get Nazi war criminals to talk just by engaging them. I thought that, as Americans, we shouldn’t be carrying out these so-called 'enhanced interrogation techniques.'”

Former Vice President Dick Cheney and many others, including the CIA, still argue that waterboarding yielded actionable intelligence that was vital to the war on terror. But Kiriakou says that is simply not true, a claim backed by the 6 million documents on CIA torture that were provided to the Senate Intelligence Committee.

A Senate committee investigated the CIA's program and released its findings in a lengthy report last December. The investigation found that the CIA went out of its way to lie to the White House and Congress about the intelligence derived from torture. The CIA denied the committee's key findings, saying they offered "an incomplete and selective picture of what occurred."

When the Senate report came out in December, Kiriakou was in prison. He says he was stunned by the report and how many times CIA interrogators crossed the “legal line.”

“For example, this rectal hydration or rectal feeding — there was nothing in the president’s signed order to allow CIA officers to do such a thing,” he says. “I’m not a doctor, but I’ve never heard of forcing hummus up a prisoner’s rectum as some form of hydration or feeding.”

Though Kiriakou denounces these Bush-era torture tactics, he says he’s also concerned about the policies being pushed by the Obama White House.

“I’ve been shocked by the number of Espionage Act prosecutions under [the Obama] administration,” he says. “In the entirety of American history, from the very beginning of the Espionage Act in 1917, there had only been three prosecutions. Since President Obama has become president, there have been an additional eight prosecutions. Almost every one of those has been for leaking to the press. I’ve never been of the belief that leaking information to the press is espionage.”

So what can be done? Kirikaou is now a convicted felon, but he hopes that President Obama will give him a pardon as he leaves office in 2016.