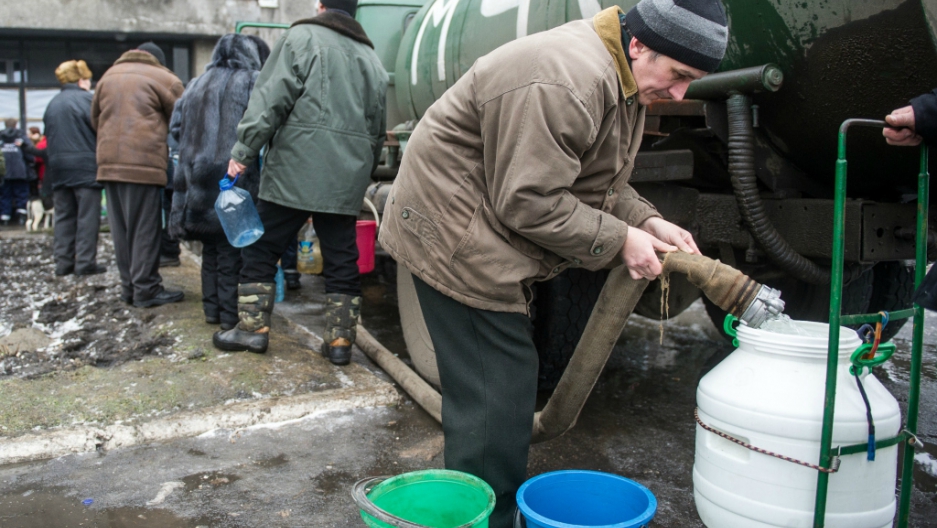 People get water from a tank in Ukraine's frontline town of Debaltseve on February 6, 2015 after both sides agreed a brief humanitarian truce.
Credit: VOLODYMYR SHUVAYEV
Share

DEBALTSEVE, Ukraine — “God save and preserve us” is written on a blackboard in one of the many ad-hoc bomb shelters in Debaltseve, a strategic railway hub in eastern Ukraine. Here over a hundred people — Including children and elderly pensioners — take refuge from the shelling.

As the newly-signed ceasefire came into effect, there was no let up in the drive of Russian-backed rebel forces to capture the town and redraw the frontlines of the conflict’s map.

Over the last several weeks, indiscriminate shelling and rocket attacks — the signature tactic of the Ukraine conflict — have intensified sharply. Civilians in Debaltseve, a front-line town that remains under Ukrainian control, if barely, are living in fear.

Hostilities first broke out in Debaltseve in late July 2014, so the town has now endured six months of near-continuous bombardment. But residents say that recent weeks have been the worst period of the entire war. Since early January, a deepening humanitarian crisis has added to the population’s misery. Electric lines have been cut; fresh water no longer flows, and stores and markets have closed.

In the harsh Ukrainian winter, life in Debaltseve is near impossible.

Yet, as I found when I visited the town recently, Debaltseve is far from empty. Entering crowded basements filled with beds, I met people hoping to survive the fighting by staying underground. They depended on humanitarian aid for food, gathered water from dirty puddles, huddled under blankets and burned scraps of wood to keep warm.

“We’re living like mice,” one woman exclaimed, “hiding underground in the darkness.”

A town of some 25,000 people in normal times, Debaltseve now has a few thousand inhabitants. The majority of townspeople fled over the summer, some even before fighting in the area began; others left in the autumn, and there has been a drastic upsurge in evacuations in the past two weeks.

But even as some locals waited in line to catch buses that would take them to safety, others were adamant that they would stay.

“Where could I go?” was a question I heard several times. “I have no place to go.”

Among the people remaining in Debaltseve are the oldest, the poorest and the most desperate hanging onto the little that they have. Most townspeople with money and options left long ago. While I saw some families and young children in Debaltseve, they were far outnumbered by pensioners, particularly widows, who have extremely limited incomes and little savings.

“We don’t want to abandon our house,” one woman said, explaining why she and her husband had stayed. “It’s everything that we have.” Yet, their house had been hit by shelling, its roof damaged and windows broken. The two were living in a communal bomb shelter.

Death strikes those who remain with terrifying capriciousness. Anna Korennaya, a widowed 50-year-old, went outside to bring back some water one afternoon and was struck by shrapnel just after she left her building.

“It had been quiet,” an eyewitness to the rocket attack told me, “and then there was a big boom. I fell, ran inside, and when I came out, after the attack was over, I found her body on the ground.”

Korennaya’s 75-year-old mother was bereft and had no money to cover the funeral costs. “We have nothing,” her mother told me. “We paid for the funeral on credit. We owe money to the grave diggers.”

The director of the nearest functioning morgue in Artemovsk said he was appalled by the mounting number of dead civilians he was seeing. The victims, he said, include children as young as one. Nearly all of the casualties have been killed by shrapnel from rockets and mortars. He also said that elderly people were dying in greater numbers of heart attacks, pneumonia and other illnesses because of shortages of medicine and the difficulty of accessing medical care.

Many have fled to the railway station in the town of Sloviansk, where I saw evacuees from Debaltseve being given a hot meal by volunteers before being relocated to other towns and cities. Nearby, in a crowded waiting room, people stood in line for free train tickets to Kiev and other places.

“We were under shelling—three houses on my street were hit yesterday,” a 76-year-old widow said when I asked her why she had left the town. “And we’ve had no water, no electricity, no heating in our house for the past month. It’s too cold for us to survive there.”

Valentina Chaika, 65, said that she had spent a month living in the basement of her building before she fled the town. “There are no windows left in my apartment,” she explained.

Like others I spoke to in Sloviansk, Valentina didn’t know where she would be going next. She also wondered when and if she would be able to return.

Given the ongoing fighting, whether the town will be left in a condition fit to return to is far from clear.