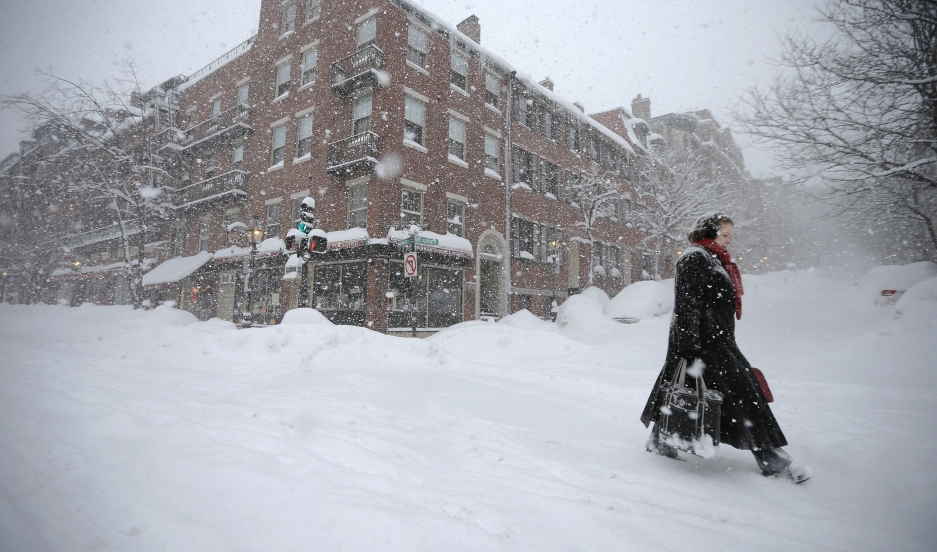 A woman walks through the snow down Charles Street during a winter blizzard in Boston, Massachusetts, on February 15, 2015. The US Northeast faced yet another major winter storm over the weekend, with blizzard conditions in six states.

Much of the United States has been pummeled with subzero temperatures and feet of snow. So we've decided to inject a bit of fun into the miserable winter of 2015.

We're asking listeners around the country to describe the icy mess clinging to roads across the country in 50 words or less. To help us get the snowball rolling, we've asked two of our friends in the frozen city of Boston to give us their 50 words for snow.

“In the perfect world it would start at 2:00 pm on Christmas Eve. On the radio, Peter and the Wolf. The snow would stop 24 hours later. About that time that crazy Uncle Harry walks through the door for his hare of the holiday roast. Anything else, an abomination."

“Here's what 50 shades of white have taught us. You don't need a meterologist or a window to know the snow is mounting. Just Facebook, my feed traces Boston's mood. Giddyness in January. Chardonnay-hoarding jokes were huge, to despair six feet later, when the most popular posts contain one word: Uncle!"

"During torrential winter downpours New Englanders like to say, 'Imagine if this were snow.' This winter has robbed us of our imagination, but at least we can now delete the braggadocio of what you did during the blizzard of 1978 and reboot with something a little fresher—where were you for the winter of 2015."

.@PRI Your beauty is dangerous to the child who is hungry in a home with no heat on a street buried deep in your beauty. #50WordsForSnow

We asked PRI's Facebook fans for their #50WordsforSnow, and they delivered.

Do you have 50 words for snow? Join the commenters below.