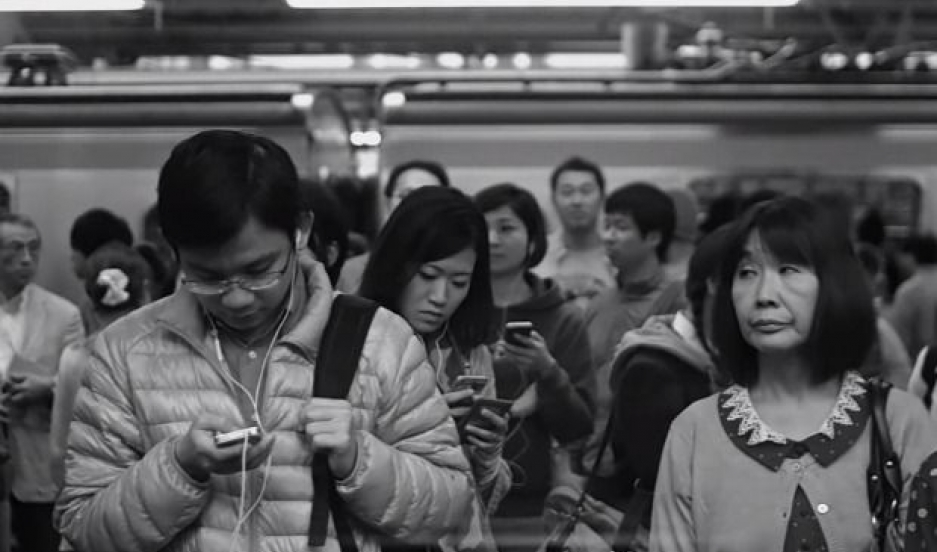 A still from "Shinjuku" shows commuters on a crowded Subway.

Adam Magyar isn’t fazed by a busy commute. Quite the opposite: the Berlin-based photographer is inspired.

Magyar’s latest video series, Stainless, transforms mundane travel into a kind of magical realism. In each installment, his camera pans sedately across a crowded transit platform: New York's Grand Central, Berlin’s Alexanderplatz, Tokyo’s Shinjuku. Picture Truffaut and the R-Train — in ultra-slow motion. A woman rifles through her bag, a man gazes blithely at his cell phone, a teenager broods.

On his website, 40-something Magyar says his objective is to “depict the synergies of man and the city, and embrace the city as home to both man and technology.” If he means that, Magyar's work isn’t just pretty, it’s also probing.

Certainly, through Magyar’s lens, passersby are almost mechanistic — and move to a sluggish, but deliberate rhythm. (Magyar filmed his travelers at 1,300 frames per second, 54 times the standard 24 frames per second.)

And there’s a certain ambiguity to his work. Is he a romantic, or a hardened cynic? Does this coexistence of technology and man delight or disturb him? It's not clear, but Stainless does feel somewhat tender, with its unflinching pace and close range.

Although Magyar is relatively new to Internet fame (Stainless went viral last year), his resume is surprisingly diverse: He's had exhibitions everywhere from Helsinki and Berlin to Cambridge and Hong Kong.

“With each of [my] series,” Magyar writes on his site, “[I] observe time flowing by and life pulsating in front of [my] eyes. ... [I] scrutinize the transience of life and man’s inherent urge to leave some trace behind.”

If Magyar’s next trace is anything like Stainless, we’re on board.

This story first appeared as a blog post from Sideshow, a new podcast from PRI's SoundWorks network.