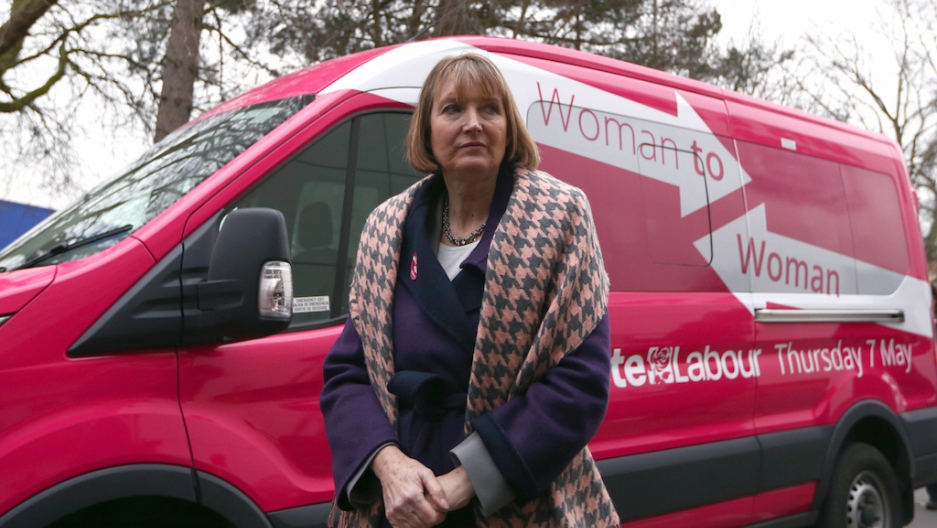 Update: On his HBO show Sunday night, comedian John Oliver took aim at the controversial pink van campaign that British politicians are using to get out the woman vote, and called it “Barbie Bus.”

“Wow! It is a little insulting that you’re trying to appeal to adult women voters the same way that Mattel attempts to appeal to 8-year-olds,” he said. “The only way it could more patronizing is if its wheels were giant Nuva rings and they refused to let women drive it.”

LONDON, UK — With the national election coming in May, the opposition Labour Party has rolled out a new campaign to engage female voters and try to win back control of the government.

Deputy leader Harriet Harman and other female Labour politicians are criss-crossing the country in a van branded just for this purpose.

Here is the van. It says “Woman to Woman,” and it’s pink. So pink. Very pink.

You know why? Because ladies love pink!

Could this be more patronising? Labour unveil pink bus to appeal to women voters http://t.co/pO3TtaU50Z pic.twitter.com/cCbCB7RkNb

#Barbiebus belongs on the 'Girls' Toys' shelves, abandoned in the stock cupboard as an antique ... pic.twitter.com/odpCuxtpXC

This Labour #PinkVan thing...is this a joke? Cos I thought @UKLabour against gender stereotypes #justsaying

And it’s going to places ladies like to hang out: Schools! Hospitals! The mall!

I'm going to stop screaming obscenities at Harriet Harman being patronising on @BBCWomansHour & go to the gym. Not a place for the #pinkvan

Harman has taken responsibility for the bus’ color, telling the UK channel ITV that it was designed to get attention.

“The reason it had to be eye-catching is because there’s a big hole in our democratic politics at the moment. In 2010 at the last general election, 9.1 million women didn’t vote,” she said.

Asked by the Huffington Post if it was patronizing, she pointed out, “Well, it doesn’t have big eyelashes on the front.” True!

“This aggressive gender segregation is a consequence of big company marketing tactics,” said one critic last week. “Why should young girls be brought up in an all pink environment? It does not reflect the real world.”

And some said it had been done before.

Where CAN Harriet Harman have got her inspiration for the new Labour pink battle bus...? #barbiesvanisbetterthanyours pic.twitter.com/WBMWcp6VQp

On Wednesday, Harman did a live chat with the users of the UK forum Mumsnet. They had challenging questions on everything from lawmakers’ expense account abuse to housing costs to policies for working parents.

When it came to the van, though:

At the van’s stop at a grocery store in the London suburb of Stevenage, a man barged in on a roundtable discussion with female voters to complain that it was “dividing up the men and women.”

Harman was also confronted by a male protester — who looked suspiciously like the man in the grocery store — wearing a T-shirt saying “This is what a victim of a feminist looks like.” (Don’t laugh. Maybe he was beaten in an alley with an Andrea Dworkin anthology. We don’t know his pain.)

Others have pointed out that the pink van could actually be a brilliant piece of political strategy.

Tip: Women's vision is based on pink. If encroaching on a woman's territory, don't wear pink, then she won't be able to see you. #PinkVan

Marketing geniuses have already proven the efficacy of pink in helping women overcome the difficulties of using pens:

Labour is hopeful that the media attention on the pink van (or Barbie Bus, as it’s known on Twitter) won’t distract from their message. And look — other colors have their problems too.

“We looked at a darker red but it looked like a Pret a Manger van,” Harman said.