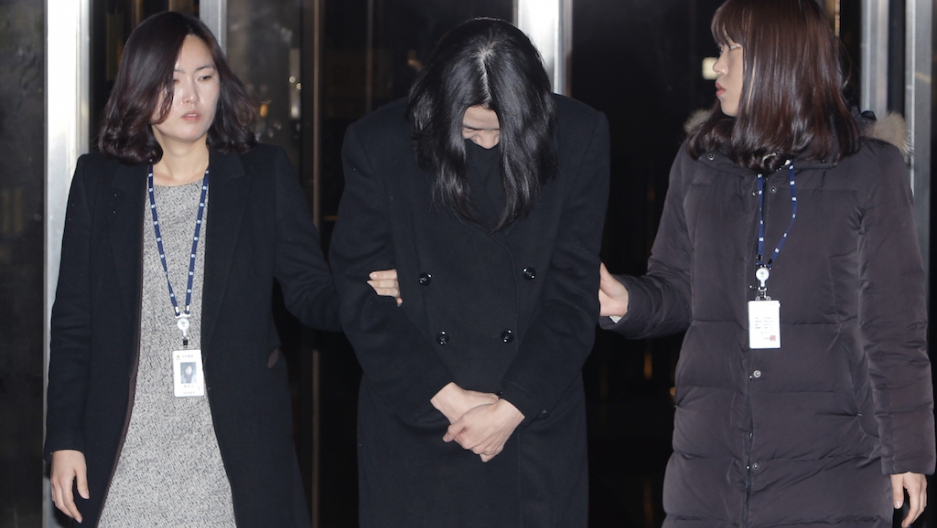 Former Korean Air Vice President Cho Hyun-Ah (C), leaves the Seoul western prosecutors' office as she is transferred to a detention house on December 30, 2014 in Seoul, South Korea. This week she was sentenced to 1 year in prison over the "nut rage" incident.
Credit: Chung Sung-Jun
Share

SEOUL, South Korea — Ever since the 2008 economic crisis, Americans have bemoaned the impunity and influence-peddling of Wall Street.

But South Koreans have long complained that their country, nicknamed the “Republic of Samsung,” has a far more entitled corporate gentry, behaving badly with little fear of accountability.

South Korea is burdened or blessed (depending on your point of view) with large conglomerates, called "chaebol," that wield enormous clout. The two largest, the Samsung Group and Hyundai Motors, account for about one-fifth of the $1.1 trillion economy. The ten largest conglomerates represent 84 percent of it.

The chairmen of many of the largest firms, including Samsung, have been investigated or found guilty of either embezzlement, tax evasion, breach of trust, bribery or, in one bizarre episode, attacking a man with a steel pipe. Some have walked free with presidential pardons, never serving time. Judges often note their importance to the economy before handing down sentences.

South Korea’s order was designed to carry out the industrial vision of past dictators and presidents. Since the 1960s, it has survived fierce political shake-ups, a military coup, and angry anti-corporate protests.

But these days, an unusually minuscule culprit — a bag of macadamia nuts served in New York — stands in sharp contrast to those old ways.

The story is well known by now. On Dec. 5, the nuts in question were part of Korean Air’s in-flight service from New York’s John F. Kennedy Airport to South Korea. But the crew’s decision to serve it in a sealable package, not a bowl, was far too cheap and tawdry for first-class passenger Heather Cho — who happened to be a company vice president and the daughter of Korean Air boss Cho Yang-ho.

Heather Cho screeched and scolded her employees that the nuts must be served in a bowl, as laid out in the company manual. She ordered the airplane back to the gate, apparently overriding the authority of the pilot and banishing an offending steward to another flight.

A national outrage ensued. This week, Cho was sentenced to a year in prison for violating aviation laws and for assaulting the purser.

Many South Koreans have taken to the blogosphere and to public gatherings to name her as perhaps the most hated person in the nation at the moment — for bringing shame and embarrassment to South Korea and for bullying those below her.

Cho also took the unusual step, in a hierarchical, militaristic corporate culture, of apologizing to the attendants far below her stature. Late last year, she was removed from her position at Korean Air and her father, the chairman of the company, apologized.

Such an intensity of public rage, at least directed at the powerful corporate leaders of South Korea, comes with few precedents in recent memory.

About once a year, similar episodes of poor behavior, aggression and even corruption rattle South Korean corporations in a country that goes notoriously light on white-collar criminals.

Executives usually escape with a wrist-slap. That means either a “suspended” sentence of a few years in prison, which can be delayed or scrapped pursuant to good behavior.

In this case, the nut rage incident revealed a gaping flaw in South Korea’s order: that employees, and in this case the pilot, fear their powerful bosses far more than the law, explained Michael Breen, author of "The Koreans."

“I think employees need to learn to fear the law more than their boss,” he said. “For that, they need to be held accountable when they give into pressure, and at the same time protected from dismissal of other retribution for refusing the follow orders to do illegal things.”