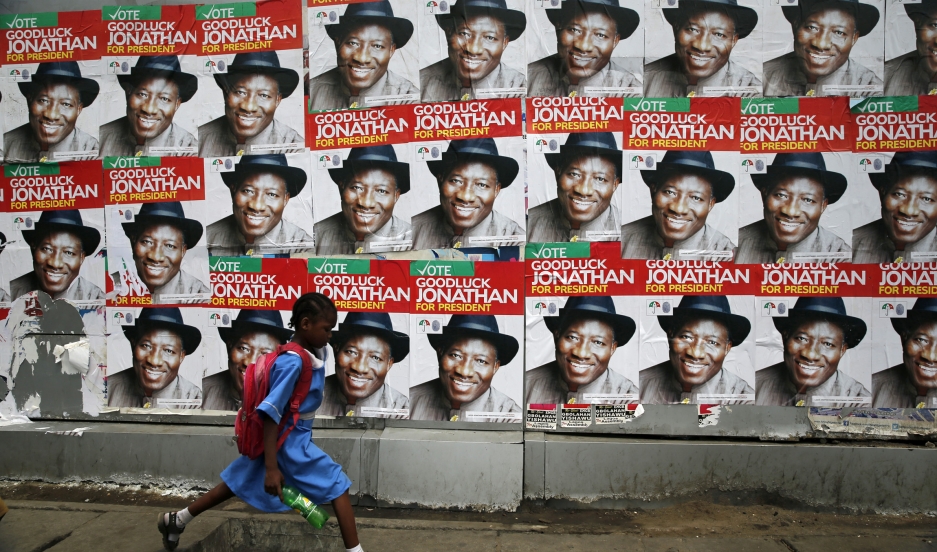 A schoolgirl walks past campaign posters in support of Nigeria's President Goodluck Jonathan along a road in Ikoyi district in Lagos.

Nigeria has postponed its presidential election for six weeks, which will allow politicians there even more time to engage in "virtual warfare," using unsavory online tactics to sway public opinion.

Nwaubani says Nigerians are increasingly looking to their smartphones and laptops to gauge popular political attitudes and weigh how much support a politician wields. But she says these days, the digital conversation in Nigeria is not what it seems.

"Hundreds of those comments — people on Twitter, people on Facebook, comments beneath news articles — are comments that people are paid for," Nwaubani says. "They're sitting in a basement, and they're paid just to make those comments — to just turn the tide of public opinion in favor of a certain politician or candidate."

She says, "it's an occupation for a lot of young men now." A case in point is a 28-year-old chemistry graduate Nwaubani met, who she says tries to steer public opinion online for a popular Nigerian politician.  Months earlier he had worked for the politician's rival.

"For him, it is not about ideology," she notes. "He wakes up every morning, drives to work, sits down all day with his colleagues, and they go on the Internet and they look for news stories where the principle's name is mentioned and they bombard those stories with comments, to give you the impression that people are either in support of what his principle is doing or they attack his attackers."

Nigeria's presidential vote was originally slated for February 14. It's been postponed for six weeks and rumors are swirling about why the vote was delayed.

Some say the current president, Goodluck Jonathan, was afraid his opponent — former military ruler Muhammadu Buhari — was going to win.

But the president says the date was changed because of the possibility of attacks by the extremist group Boko Haram. He says the only factor that motivated the delay was a concern from military leaders that they couldn't guarantee safety at polling stations.