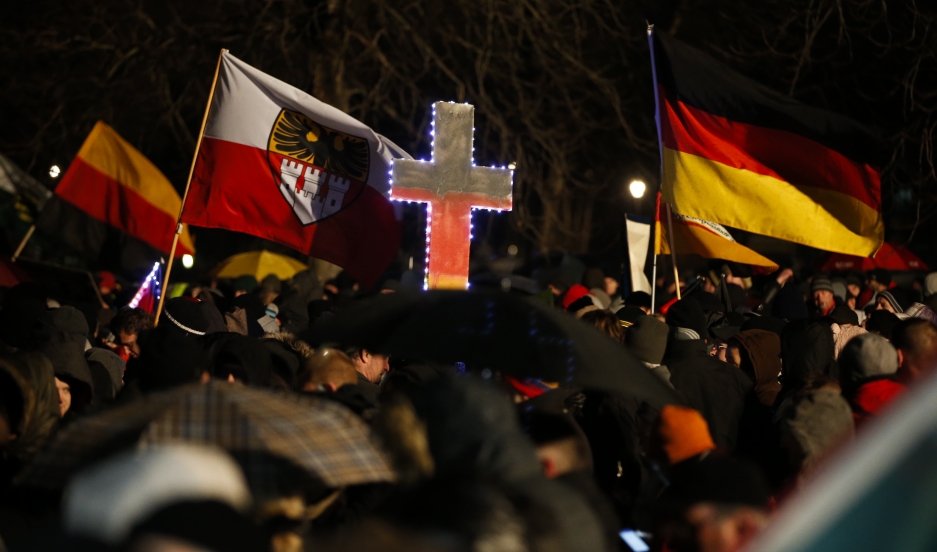 Protesters attend a rally organized by PEGIDA, a German abbreviation for "Patriotic Europeans against the Islamization of the West", in Dresden January 5, 2015.

The illuminated cross caught my eye right away. It was hovering above the crowd at the PEGIDA rally I attended in Dresden this week. Hang on a second, I wondered, is there an element of religious revival going on with this anti-immigration, anti-Islam protest movement?

The short answer is, not really.

In their 19-point manifesto, the leaders of Germany’s PEGIDA movement say they want to defend “Judeo-Christian western culture.” And they want Europe and the rest of the western world to wake up against the threat posed by Islamic influence.

At their rallies, PEGIDA protesters have held up the cross, sometimes in the tri-colors of the German flag of black, yellow and red. But it would be a mistake to view this far-right populist movement as a Christian one.

“They’re trying to show that, ‘We have our culture here in the West,’” says Reverend Pfarrer Feydt of the Frauenkirche Luthern church in the city of Dresden, where the PEGIDA rallies started.

Feydt reckons that the cross is more of an anti-Muslim symbol for the protesters, rather than an expression of Christian ideology. He says he is disturbed whenever he sees them using it.

“I feel angry and I feel ashamed. They don’t know what they’re doing,” he says.

Indeed, the cross represents PEGIDA’s rejection of the “Islamization” of the western world, explains Achim Exner of Dresden. He was a leader with PEGIDA up until recently, when he and several others broke away to form a splinter group calling itself, Direct Democracy for Europe. Exner says the two factions still share the same basic goals. First and foremost, they want Germany to reform its immigration system and stop granting asylum to so many people from the Middle East and North Africa.

“Historically, we see the cross as a counter-symbol to the [Muslim] half moon,” says Exner, who is a retired security professional. “It’s a symbol for Western values.”

The PEGIDA protest movement is best understood as anti-religious, says Werner Patzelt of the Technical University of Dresden. “It is in this way part of the [former] East German society,” Patzelt says. He says only 20-25 percent of the people living in what used to be the German Democratic Republic identify as members of an organized religion.

“The usual attitude of east Germans towards the phenomenon of religion is that either religion is something for stupid persons, who are not enlightened enough. Or, it is something quite dangerous leading into violence,” Patzelt says. “The PEGIDA movement is a reaction against all religions.”

So, why are the protesters not taking aim at Christianity? “Because it’s not taken seriously,” Patzelt says. “Christians here don’t have much impact on society.”