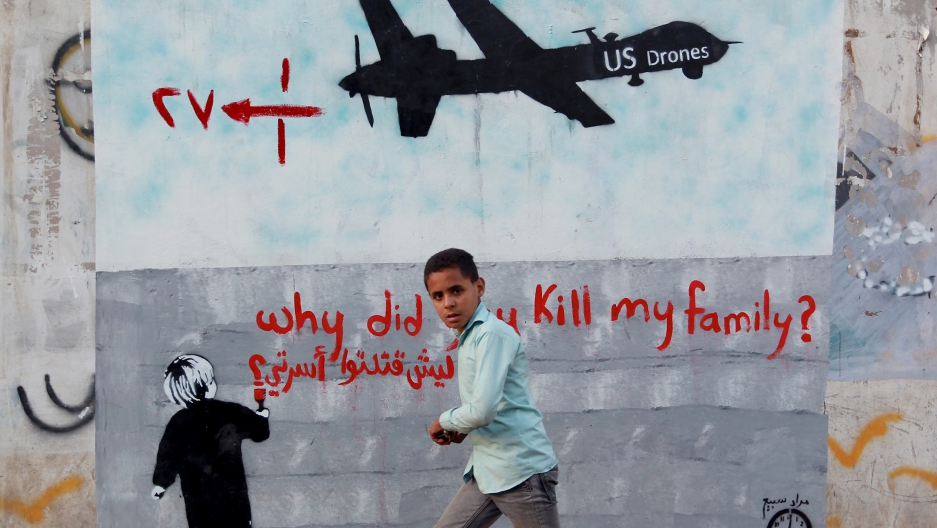 A Yemeni boy (C) walks past a mural depicting a US drone and reading ' Why did you kill my family' on December 13, 2013 in the capital Sanaa. A drone strike on a wedding convoy in Yemen killed 17 people, mostly civilians, medical and security sources said, adding grist to mounting criticism of the US drone war.
Credit: MOHAMMED HUWAIS
Share

Mohammed Saleh Tauiman was just 13 years old in 2014 when the Guardian newspaper gave him a camera so he could record life under the drones that flew over Marib province, Yemen.

His father and teenage brother had been killed in a US drone attack in 2011 while they were herding the family's camels. Afterward, he lived in constant fear of what he called the "death machines" that circled above him in the sky.

“I see them every day and we are scared of them,” he said to the Guardian. “A lot of the kids in this area wake up from sleeping because of nightmares from them and some now have mental problems. They turned our area into hell and continuous horror, day and night, we even dream of them in our sleep.”

And then, on Jan. 26, a drone killed Mohammed. The Guardian asked both the CIA and the Pentagon whether they'd identified the 13-year-old boy as an Al Qaeda militant. Neither agency gave a comment.

It's just the latest tragedy caused by the controversial US drone campaign.

Six years ago, on Jan. 23, 2009, President Barack Obama launched his first drone strikes just three days into his presidency, killing at least nine civilians in the course of two strikes in North Waziristan.

Since then, US drones have killed more than 2,400 people in strikes targeting markets, homes, funerals and even weddings, according to the Bureau of Investigative Journalism, a UK-based nonprofit. Between 2004 and 2013, drone strikes killed an estimated 2,525 to 3,613 people.

In May 2013, Obama defended the drone strikes, saying they were legal, effective, and saved American lives. He said civilian casualties would "haunt" him for the rest of his life, but that he needed to weigh the loss of civilian lives against the threat to life posed by terrorists.

There are doubts, though, about how effective Obama's drone campaign has been when it comes to avoiding civilian casualties and killing terrorists. Researchers found that only 12 percent of drone strike victims in Pakistan could be identified as militants and fewer than 4 percent were indentified as members of Al Qaeda. More than a third of those who were described as militants “were not designated a rank” and nearly 30 percent were not even linked to a specific group.

Unmanned aircraft have done more than just kill and injure thousands of civilians, according to the program’s critics, which include the United Nations, Human Rights Watch and Amnesty International. Drones terrorize and traumatize the population, forcing people to keep their children home from school, avoid large gatherings that may prove suspicious, and remain hidden, lest they be killed before proven innocent.

“There’s a pervasive fear for people every second of the day,” said Sarah Knuckey, one of the lead researchers and editors of the 2012 report, "Living Under Drones" to MSNBC. “It has a significant mental health impact for people living there.”

But don't just listen to drone critics. Listen to the people of Pakistan, Yemen and Somalia in their own words. Here are just a few harrowing accounts from ordinary people who have seen and experienced the devastating human cost of US drone strikes firsthand:

"I no longer love blue skies. In fact, I now prefer gray skies," Zubair, a 13-year-old boy from North Waziristan, Pakistan, said in a testimony before Congress in October 2013. "The drones do not fly when the skies are gray ... When the sky brightens, drones return and we live in fear. It's something that a 2-year-old would know  ... We hear the noise 24 hours a day.”

Zubair’s grandmother was killed by a drone strike on Oct. 24, 2012, as she was picking okra in a field. He testified together with his father and 9-year-old sister.

Rafiq, Zubair, and Nabila ur Rehman testifying at #droneshearing today on the Hill. pic.twitter.com/kXodjUQnwb

"Nobody has ever told me why my mother was targeted that day," said Zubair's father, Rafiq ur Rehman, a Pakistani primary school teacher. He described his deceased mother, Momina Bibi, as the "string that held our family together."

“As a teacher, my job is to educate. But how do I teach something like this? How do I explain what I myself do not understand? How can I in good faith reassure the children that the drone will not come back and kill them, too, if I do not understand why it killed my mother and injured my children?"

"As we were driving to the site, I felt myself going deeper and deeper into darkness," said Aziz. His brother Abdullah Mabkhut al-Amri’s wedding in Rada’a, Yemen in December 2013 made headlines when four hellfire missiles struck it. "That is the feeling of a person who sees his brothers, cousins, relatives and friends dead by one strike, without reason."

"People were really terrified," said Saeed Mohammed Al Youseffi of Ma'rib Province, who was set to get married two days after the tragedy in Rada’a. "People are afraid now to attend any large gathering — weddings, funerals. Everyone is just trying to survive."

"We don't know who is with Al Qaeda," said Oum Saeed, a middle-aged mother of 10, "but the drones know."

“Yemen is losing an entire generation to drones,” said Faisal bin Ali Jaber, an environmental engineer in Yemen who lost two family members in a 2012 drone strike. He said leading a normal life is impossible “when you have a drone hovering above your neighborhood."

“Drones may kill relatively few, but they terrify many more,” said Malik Jalal, a tribal leader in North Waziristan. “They turned the people into psychiatric patients. The F-16s might be less accurate, but they come and go.”

"The drones are like the angels of death,” said Nazeer Gul, a shopkeeper in Pakistan. “Only they know when and where they will strike.”