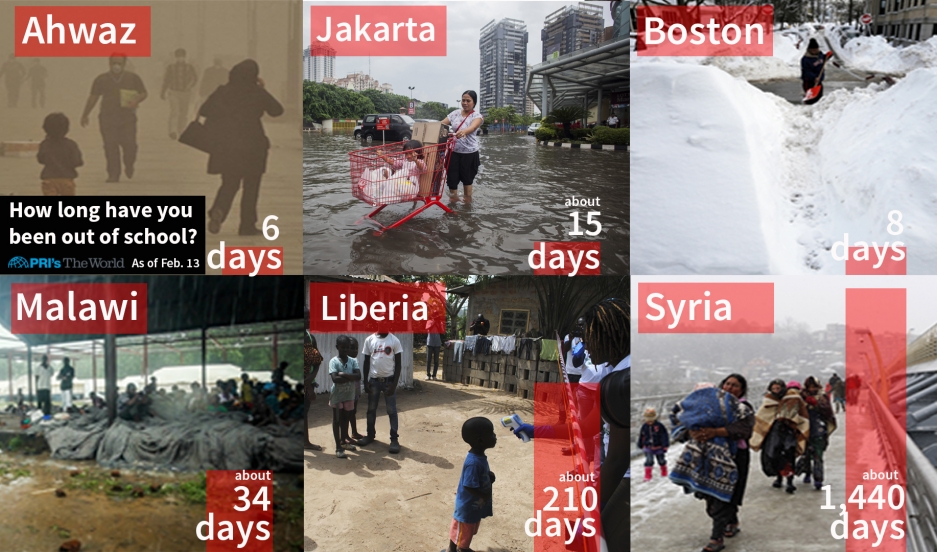 How long have you been out of school? Clockwise: A boy walking in Ahwaz, Iran during a dust storm (Medyar Shojaeifar/MEHR Newsagency); A mother uses a shopping cart to transport her child during a flood (Sigid Kurniawan/Reuters/Antara Foto);Man shoveling a street in Boston (Brian Snyder/Reuters); Syrian refugees braving the cold and snow in Istanbul  (Murad Sezer/Reuters); Health workers take a boy’s temperature who came in contact with a woman who died of Ebola (James Giahyue/Reuters); Malawians wait out another flood at a makeshift shelter (Sam Eaton). Graphic by David Conrad.

While trudging to work through 4-foot high piles of slush and snow, the aftermath of two weeks of winter storms in New England, it has been easy to become consumed with the inconvenience of my particular plight.

Thankfully I work at a job that slaps this out of me every morning. A brief survey of recent weather events reveals just how lucky my morning commute is.

A storm of suffocating dust, reportedly polluting the air 66 times above the healthy level, continues to pummel the embattled citizens of Ahwaz, Iran. Roughly 175,000 people have been displaced in Malawi due to the worst flooding the country has seen in half a century. Meanwhile, continuing civil war in Syria has displaced an estimated 9 million people and forced thousands of children out of school since March, 2011 –- Boston’s eight days of school closings are much less striking when staked-up against the upward of 1,440 days of school that Syrian children have missed.

This graphic doesn’t begin to encapsulate all of the tragic particularities of these events, but it certainly brings my commute to work — and hopefully yours — into a bit of perspective.