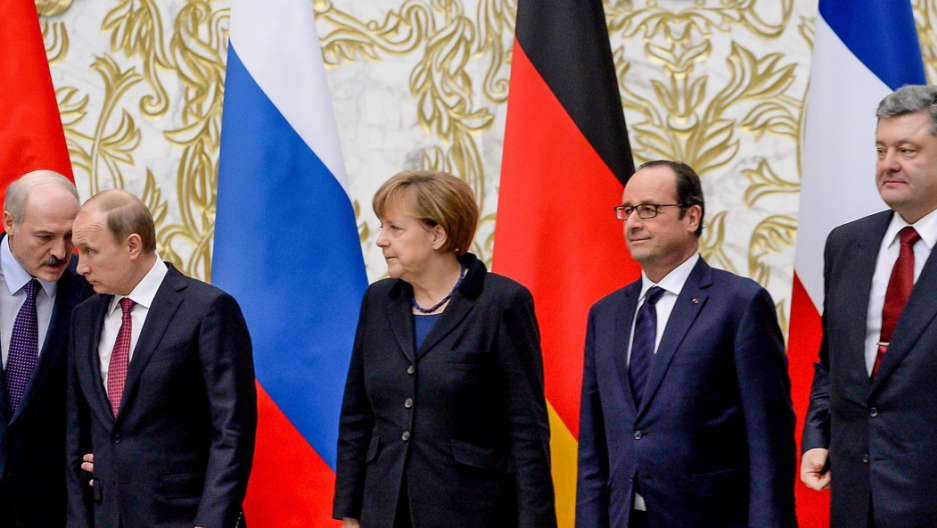 Reuters — The leaders of Ukraine, Russia, Germany and France agreed a deal to end fighting in eastern Ukraine at talks in Minsk, Belarus, that ran all night into Thursday.

Here are details of the agreement from a Russian-language document handed to reporters.

Kerry's comments on the ceasefire

"We will judge the commitment of Russia and the separatists by their actions, not their words," US Secretary of State John Kerry said in a statement. "As we have long said, the United States is prepared to consider rolling back sanctions on Russia when the Minsk agreements of September 2014, and now this agreement, are fully implemented. That includes a full ceasefire, the withdrawal of all foreign troops and equipment from Ukraine, the full restoration of Ukrainian control of the international border, and the release of all hostages."

GlobalPost senior correspondent Dan Peleschuk examines the fine print of the new ceasefire in this analysis. Here's an excerpt from his piece:

A positive aspect of the deal is a provision that allows for an "all-for-all" prisoner exchange to be completed no later than five days after the pullback of heavy weaponry from the front lines.

This is likely good news for the families of combatants on both sides, whose relatives have been captured and held for days, weeks or months on end.

But that may not be the case for Nadiya Savchenko. She's a Ukrainian military pilot whom rebels detained last summer and spirited away to Russia to face charges over her alleged involvement in the conflict deaths of two Russian journalists.

Savchenko is currently on trial in Moscow, where she’s spent more than 60 days on a hunger strike in protest.

She's become somewhat of a folk hero and a symbol of Moscow’s alleged meddling in the conflict. Poroshenko expressed hopes in Minsk that Savchenko would be freed under the accord, but his Russian partners don’t seem to agree.

"The method for automatically freeing a person accused of participating in murder, in this case of a Russian journalist, does not exist," Alexei Pushkov, the head of Russia's parliamentary committee on international affairs, told journalists Thursday.

Even one of her lawyers, Mark Feygin, says her release is not exactly a done deal. "The situation has been clarified," he wrote. "Savchenko's case formally continues. It will conclude in a formal procedural manner. At least Savchenko’s innocence is obvious."

There is, of course, a lot of gray area surrounding the proposed prisoner exchange, as GlobalPost's Paul Ames notes in this tweet:

More details on Savchenko's case in this story on The New York Times.

Following an epic 17 hours of peace negotiations in Minsk, Belarus, leaders from Russia, Ukraine, France, and Germany have agreed to a ceasefire deal to take effect midnight on Saturday.

But given how quickly the first peace deal — also brokered in Minsk — fell apart last year, it's probably not quite time to get your hopes up.

"Even as the agreement was announced, it appeared fragile, with officials on all sides saying that there was more work to be done," The New York Times' Neil MacFarquhar reported.

More than 5,300 people have been killed and scores wounded in Ukraine’s protracted war between pro-Moscow rebels and Ukrainian forces.

"The new deal envisages a buffer zone to be created by pulling back the heavy artillery and rocket systems from 50 to 140 kilometers (31 to 87 miles) away from the frontline depending on their caliber," The Associated Press' Yuras Karmanau and Vladimir Isachenkov report. "The withdrawal should begin no later than a second day after the cease-fire becomes effective and be completed within two weeks."

The hours leading up to the deal were dramatic, with Ukrainian President Petro Poroshenko warning that the country would be forced to declare martial law if the peace talks weren’t successful, GlobalPost Senior Correspondent Dan Peleschuk reported from Kyiv.

There was also talk before the deal on whether the West should arm Ukraine. In a report released on Feb. 2, officials including two former US ambassadors to Ukraine and an ex-NATO military commander called for the US to supply $1 billion in lethal aid to Ukraine this year.

Earlier this week, US President Barack Obama said he hadn't decided whether the US would send weapons to Ukraine.