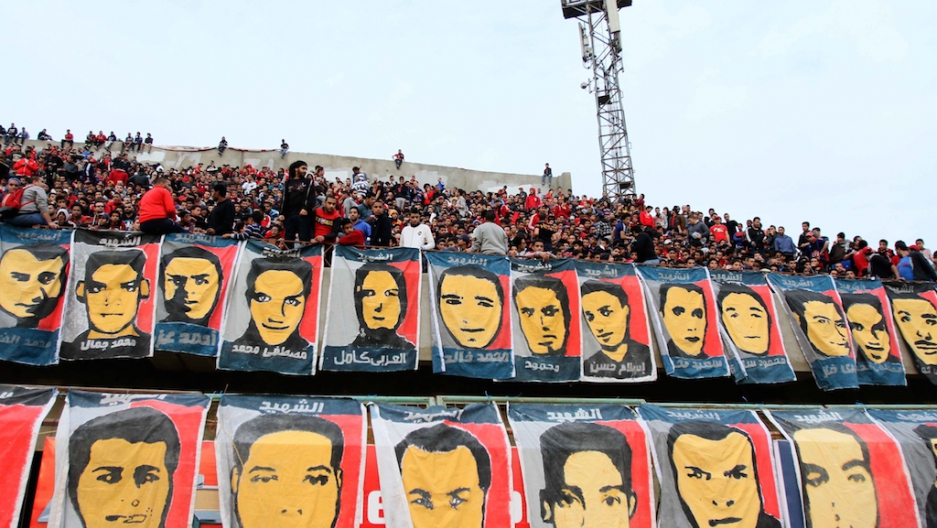 Portraits of the victims of the Port Said Stadium are seen as Supporters of Egypt's Al-Ahly football club gather in Mokhtar El-Tetsh Stadium in Cairo, on February 1, 2014, to mark the second anniversary of the deadly riot.
Credit: AFP
Share

CAIRO, Egypt — There was a terrible sense of deja vu for Egypt when at least 22 people were killed during clashes with security forces outside a soccer stadium on Sunday.

Witnesses said that most died from suffocation or were crushed in the stampede that followed when security forces fired tear gas to disperse spectators who were trying to force their way into the match between local teams Zamalek and Enppi.

Videos of the incident show fans wedged between large coils of barbed wire reinforced with metal to form a kind of cage and police firing tear gas at them.

Egypt has been here before. Sunday’s violence brought the death toll for soccer fans killed at games to nearly a hundred in three years. The worst instance came on Feb. 1, 2012, when 74 fans were killed at a match in the canal city of Port Said.

Egypt’s Ultras have a long history of confrontations with the police. Like their counterparts in Europe, where the rowdy soccer fan culture originates, they often use fireworks, are loud and at times get unruly.

Since they emerged in Egypt in 2007 they have often clashed with police. They say their experience confronting security forces and Egypt’s notorious police brutality led to their prominent role in the 2011 revolution.

In response to Sunday’s violence, the Ministry of the Interior spokesman Hani Abdel Latif said he “refused to hold the Interior Ministry responsible” for the killings. The Ministry said in its official statement that “large numbers of ticketless fans tried to storm the stadium, which caused security forces to prevent them from damaging the stadium facilities.”

Not all of those killed during the clashes were Ultras. The youngest victim was a 14-year-old girl, according to the Forensic Medical Authority.

The White Knights, a prominent group of Zamalek Ultras, called it a “premeditated massacre.”

But clashes between the police and the Ultras are not simply a matter of containing rowdy soccer fans.

“Most of the incidents that have involved the Ultras, and there have been numerous, have really been the equivalent of clashes between demonstrators and security forces,” says James Dorsey, co-director of the Institute of Fan Culture at the University of Wuerzburg and editor of the blog “The Turbulent World of Middle East Soccer.”

“In a country, whether under the Mubarak regime or the Sisi regime, that tolerates no uncontrolled public space,” he says, the claiming of public space is “inherently political.”

He adds that the relationship between the Ultras and the police has long been tense.

Some say that poor training for police, many of them conscripts, is partly to blame — but that’s not the whole story.

"Training has always been really bad, it’s not necessarily getting any worse, but it’s not improving and there is a normalization of higher levels of violence and loss of life," says Karim Ennarah, security sector researcher with the Egyptian Initiative for Personal Rights.

When fired at close range, in large quantities or in a confined space, tear gas can be lethal.

"The key thing is you shouldn't fire it directly into a crowd or into a closed space,” says Ennarah. “It's supposedly a dispersal weapon and if it's fired and there's nowhere to get out there's a high probability of asphyxiation, and it's not like the police has no experience with that."

Thirty-seven prisoners were killed in August of 2013 when officers fired tear gas into a police van outside of Abu Zaabal prison. The case resulted in one of few convictions of police for their role in the deaths of protesters over the last four years, but the sentences were overturned and a retrial is now ongoing.