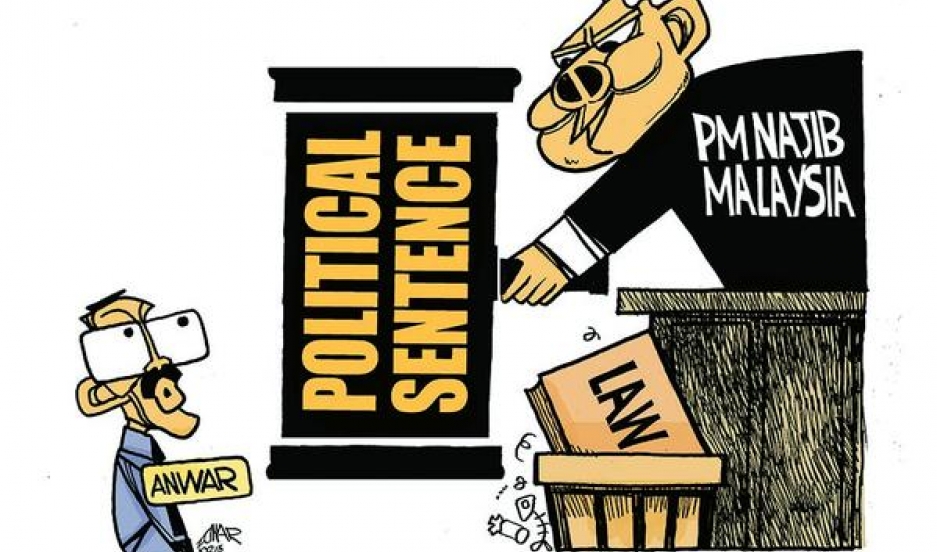 A Malaysian satirist tweets a political cartoon. The next day he's arrested for sedition. Malaysian authorities say Zulkiflee Anwar Ulhaque -- better known as Zunar -- implied in his tweet and cartoon that Malaysia's Prime Minister Najib Razak influenced the judiciary in the case of Anwar Ibrahim, an opposition leader.

On February 10th, Anwar Ibrahim was sent to jail for five years in a politically charged sodomy case after losing his latest appeal of a conviction which resulted after the Malaysian government appealed a 2012 aquittal. Sound complicated? It is, but the long saga of political leader Anwar Ibrahim is something that Zunar has cartooned about for years.  And for most of those years, the Malaysian government has tried to prevent him from publishing his cartoons.

Last month, Zunar's office in Kuala Lampur was raided while he was on a speaking tour in London. More than 150 books were confiscated. The raid was made under Printing Presses and Publications Act, the Sedition Act and Penal Code. The action was extended to the printers, vendors and bookstores around Malaysia and authorities warned them not to print and sell Zunar's books in future.

This is the second time Zunar has been investigated under The Sedition Act for cartooning.

In September 2010, he was arrested and detained for two days and two of his books were banned by Malaysia's home minister for nearly a year. In 2011, Zunar was awarded the Courage in Editorial Cartooning Award by the Cartoonists Rights Network International.  (Here's our 2011 interview with Zunar.)

Today, Zunar released a statement from jail in Kuala Lampur. It reads:

"Statement by Zunar from inside the police lock-up on 11 February 2015:

I have been detained yet again and being investigated under Section 4 (1) (c) of the Sedition Act 1948.

At 9pm on 10 Feb 2015, five police officers came to my house and arrested me over the tweets on my Twitter account criticizing the judiciary related to Anwar Ibrahim's rejected appeal case on the sodomy conviction.

They also took my mobile phone for investigation over the Twitter postings."

On March 6, Zunar is scheduled to take part in a forum at a UN Human Rights Council Session in Geneva. He plans to table a motion to designate January 7th 'World Satire Day'. January 7th is the day gunmen killed French satirical magazine Charlie Hebdo editor Stéphane Charbonnier, and cartoonists Cabu, Wolinski and Tignous along with several others in Paris.

"This is really a government of the cartoon, for the cartoon and by the cartoon." ~ @zunarkartunis pic.twitter.com/6lnVsawwJV