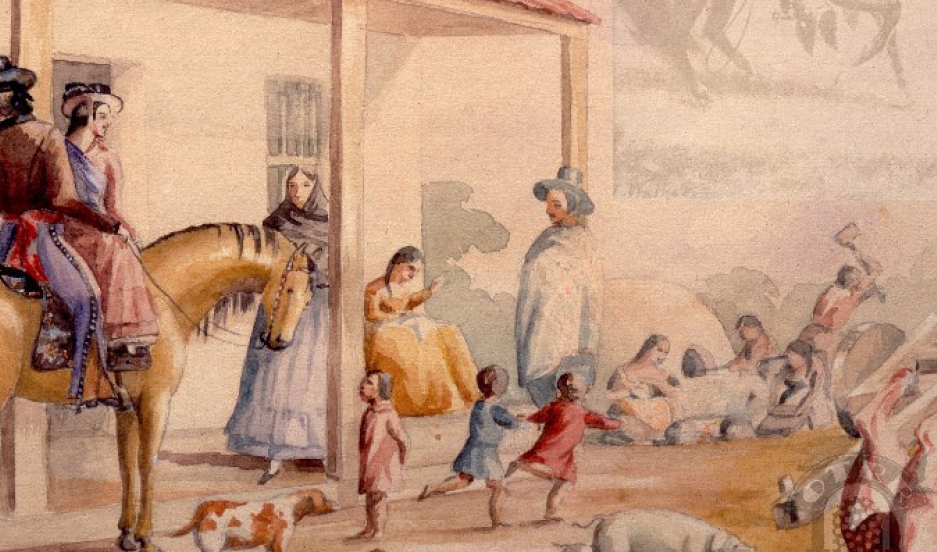 Hugh Reid's story was dramatized in a 1940's radio program called The Romance of the Ranchos.  This was one of the promotional images used for the series.  Hugo and Victoria Reid's story were also the inspiration for Helen Hunt Jackson's epic 1884 novel, Ramona.

To truly explore the early roots of Spanglish, we have to go back to the dawn of the Dons.

Picture California in the early-19th century, when Los Angeles was known simply as the little "pueblo" and "Alta California" as the region was then called, was still a part of Mexico.

And living in the a rancho just north of the pueblo was a young Scottish adventurer named Hugh Reid. In the 1830s he left the old world for the new — Mexico. And in his adopted home he was rechristened with an additional Spanish name, Perfecto Hugo Reid. Reid would eventually settle down on a ranch in southern California near the San Gabriel mission in what's now Arcadia, a suburb of Los Angeles, where he married a local woman, Doña Victoria.

Robert Train has been obsessed with Hugo Reid’s backstory for the last few years. Train is a professor of Spanish at Sonoma State University. We met recently at the Huntington Library archives in Pasadena, to read Reid's extremely yellowed letters.

Reid wrote to a man named Abel Stearns, another gringo — yes, that was a term, Train says, that was used around that time — living in Alta California. Stearns had emigrated from Massachusetts and, like Reid, he had also become a Mexican citizen. Reid’s letters to Stearns detail daily life in early California. 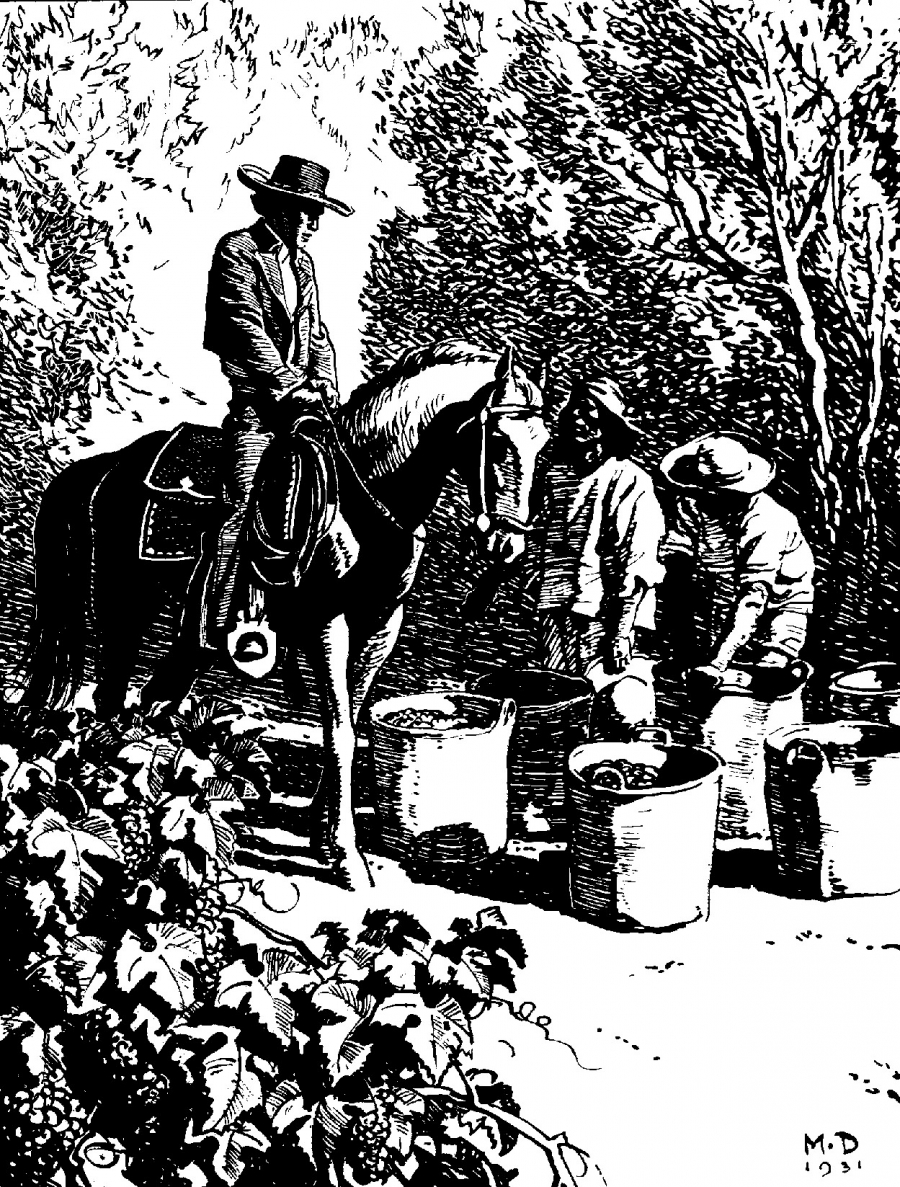 In one letter, Reid tells Stearns about his recent trip around other parts of Mexico. It's a fairly ordinary letter at first, except woven into the mostly English letter are phrases in Spanish. Often sentences will start in one language and shift to fluidly to the other language. Neither Spanish nor English, this is pure Spanglish.

In his own words

Hugo Reid wrote letter after letter to Abel Stearns in Spanglish. That's not to say he couldn't write in strictly Spanish or strictly English. He could. And he did — Train has plenty of examples of those — but often the Scotsman chose to use both at once doing what Train calls code-switching.

Reid could've easily communicated to his English-speaking-mate in English. But instead he chose Spanglish.

Both Reid and Stearns married native Spanish speakers. Historians don't know for sure but assume they spoke Spanish inside their homes. And Reid's correspondence reflects a sort of back and forth between worlds. The Spanish words often key into domestic affairs, like requests from Reid to buy cloth from Abel Stearns store. Stearns was a merchant. He is credited with helping to start the port in San Pedro.

In another letter, Hugo Reid writes, “... the old woman requires for the house a piece of percale and best in manta blanca. Si no hay percala send her pura manta blanca. I remain yours truly, Perfecto Hugo Reid.”

“Percala” is a type of cloth called percale in English and “manta blanca” is coarse cotton, but the most curious part of the exchange is not Hugo Reid ordering fabric for his wife in Spanish but what he calls his wife in English: "the old woman." It's a direct translation, says Train, of how men in Alta California might've referred to their wives in Spanish.

“La Vieja, which I guess is the standard use of this time for ‘the old lady,’” Train says. 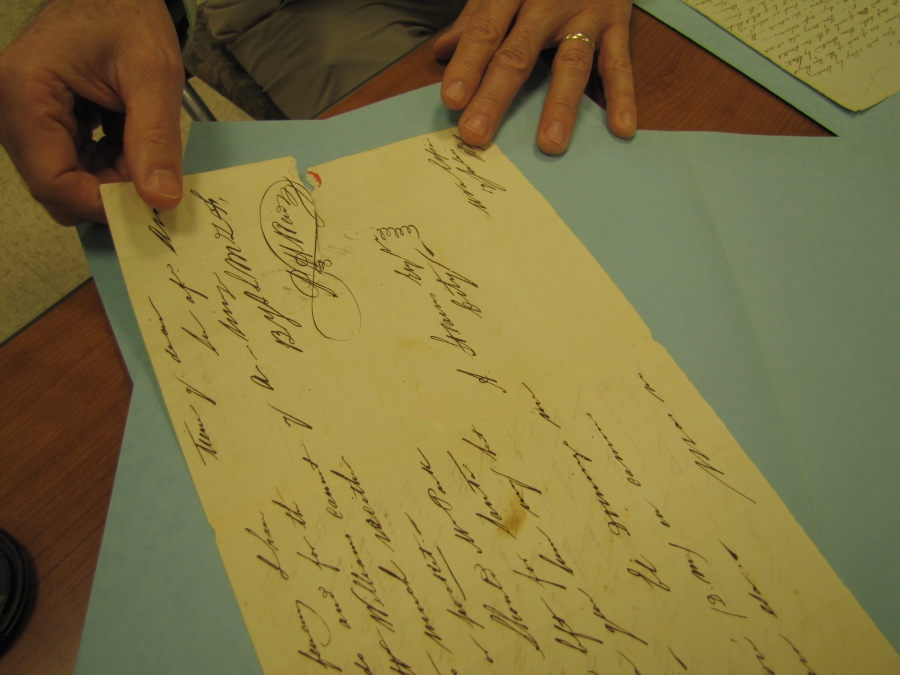 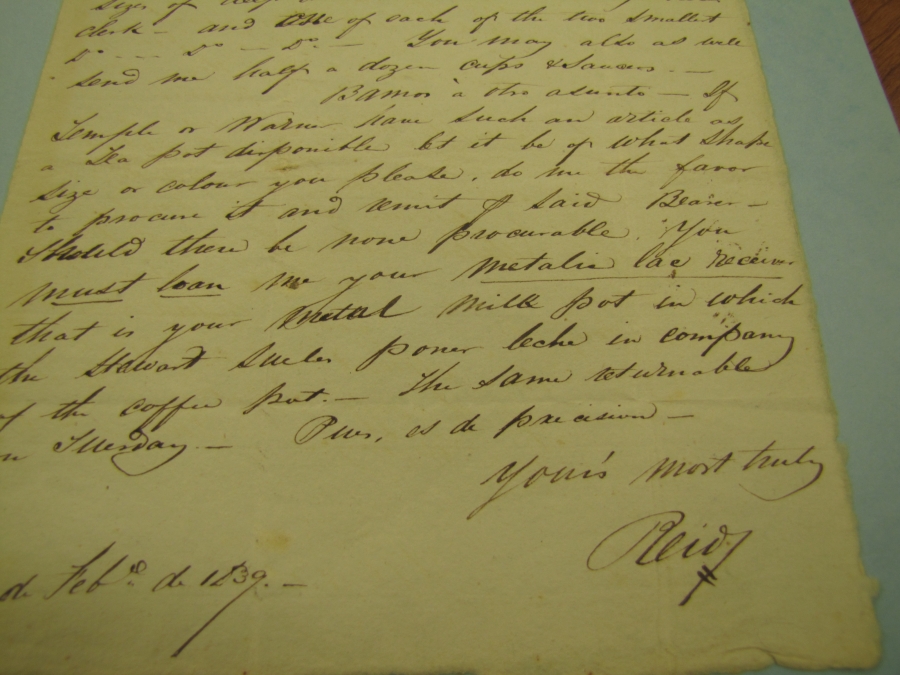 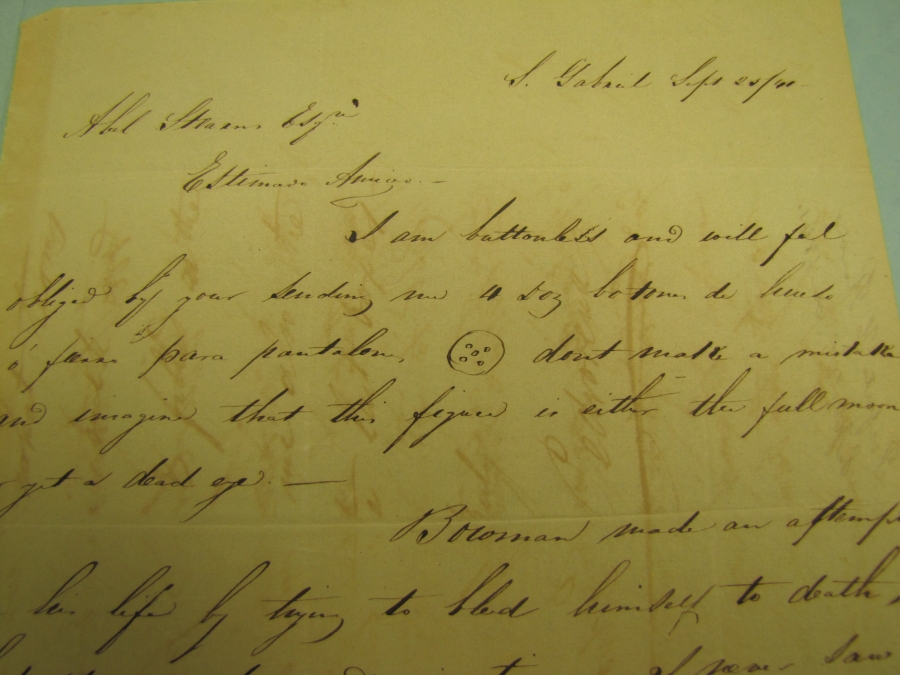 Letter from Hugh Reid to Abel Stearns asking for goods from his Stearns' store.

So what's the big deal? A few native English speakers spoke Spanglish to each other way back when. What's this have to do with anything today? Simple, says Train. Hugo Reid's letters are reminders that California was, is and has always been a multilingual place.

When I learned Spanish in southern California public schools, I learned it as my foreign language prerequisite.

Reading the signs as you drive down Third Street in East LA, Spanish is far from a foreign language. But the real lingua franca is Spanglish. The sign for the East LA institution, King Taco is a great example. “King Taco. The Best Food in Town. Burritos y Tacos Al Pastor. Y Carne Asada. Park here.” 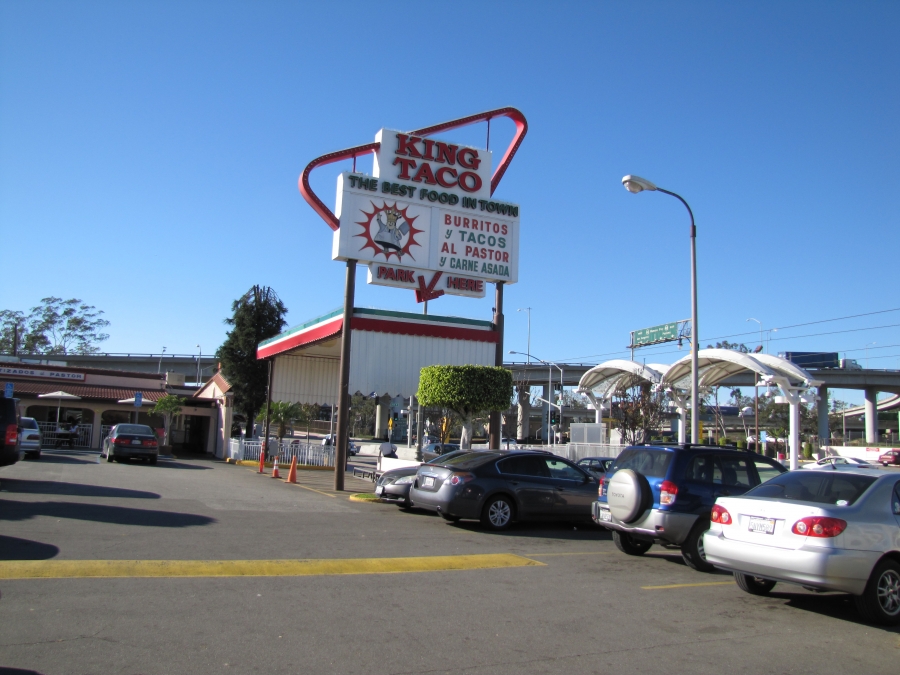 Robert Train and I did park and eat and I couldn't help but eavesdrop on the women sitting at the table next to us. Two young mothers, Desiree Gardenas and Brenda Padilla, and their toddlers are speaking Spanish and English and, yes, Spanglish.

We've tracked down an excerpt of a radio drama that attempted to recreate the spirit and times of the ranchos and vaqueros in Southern California.

Listen to a fictionalized version of Hugo Reid's story here >

Do you ever mix the languages together, I asked them. Yes, of course they said. It’s normal.

Post lunch, around the corner from King Taco, Train and I made one final stop at the Calvary Cemetery.

It's a beautiful, old cemetery on a hill. Thousands of stone monuments commemorate the early residents of the pueblo of Los Angeles. And the modern city, with her tall skyscrapers and her smoggy skies, can be seen in the distance. This is where Hugo Reid and Abel Stearns — these early Spanglish speakers — are buried mere miles from where Spanglish continues to thrive.

“I read this part of a whole immigrant story, part of an unexpected one really,” Train says.

Hugo Reid died at the age of 42, just two years after Mexican Alta California became the 31st United State. Incidentally, in his final days he became obsessed with saving another language, the language of the Gabrieleño Indians, the ancestral language of his wife Doña Victoria. Sadly, that language has not survived. 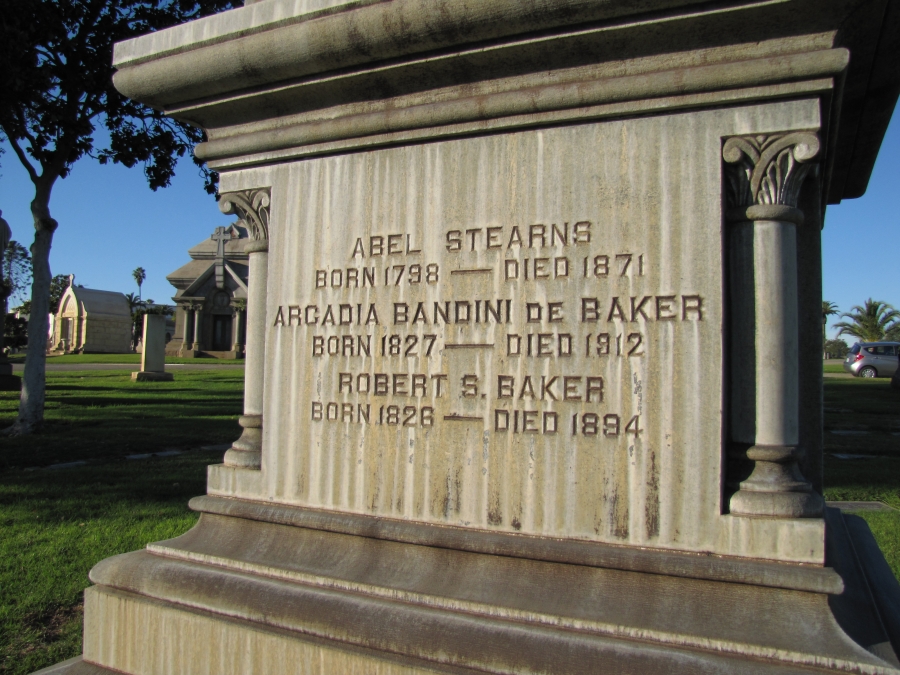 The grave of Abel Stearns and his wife Arcadia Bandini at the Calvary Cemetery near East LA. 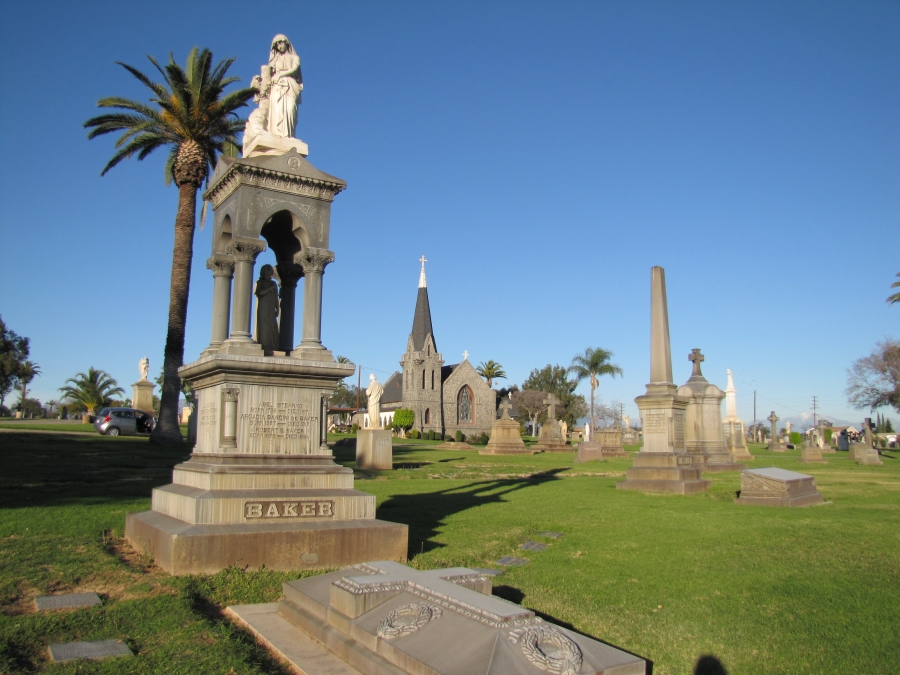