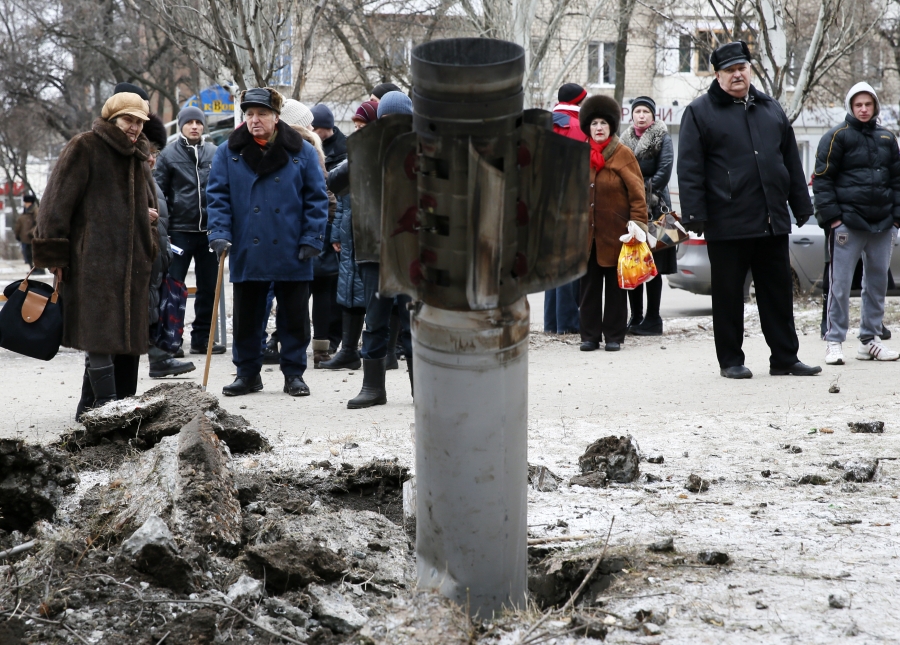 People look at the remains of a rocket shell on a street in the town of Kramatorsk, eastern Ukraine February 10, 2015.

Seeing The News: The situation in eastern Ukraine is not good. Three people were killed and 15 wounded in a rocket strike on the town of Kramatorsk Tuesday. Here you can see one of remains of one of those rockets as people gather to inspect the destruction of the home.

A present from Putin

Many in the West have raised concerns about Russia's alleged involvement in arming the rebels in eastern Ukraine. Russia continues to deny their military support. But at least we can now confirm that Putin is behind the arming other countries. At least some ways.

So appropriate and symbolic given #Egypt's recent history: Putin gives Sisi the gift of a brand new AK-47. pic.twitter.com/YwtE4w9IDd

The space community is thrilled by a discovery. It's not a new star or something celestial, but bag full of astronaut goodies that has definitely been to space. Neil Armstrong's wife found a white cloth bag in a closed at her house. It turns out that it was a bag — a McDivitt Purse to be specific — that officials have determined was a part of the historic Apollo 11 mission.

Neil Armstrong widow finds a bunch of stuff in closet he took to the moon http://t.co/qgoLd5HWYy h/t @alexismadrigal pic.twitter.com/wnRtzxsQOH

The new core of Earth's core

A little closer to home, scientists have discovered there's a an even deeper mystery at Earth's core. US and Chinese researchers have published new findings in the journal Nature Geoscience suggesting that the "innermost core of our planet has another, distinct region at its center." Our core has a core.

Seeing The News is a periodic selection of arresting visual topics around the world. What have we missed? Let us know in the comments, or tweet @sdavy with your tips.