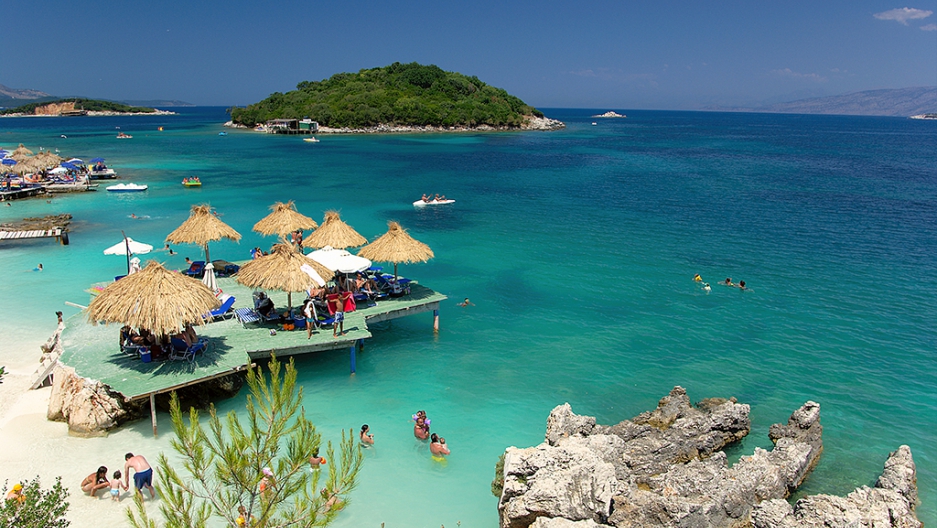 BOSTON – Around six feet of snow has fallen on Boston over the last 30 days. There’s so much snow that the city is running out of room on its “snow farms,” which are basically landfills for snow and are apparently things that exist here.

These are cold, dark days at GlobalPost headquarters.

Just as the daily horrors of the world sometime make it necessary to spend your lunch hour looking at photos of puppies on the internet, this Boston winter calls for some beach pictures.

More from GlobalPost: 7 natural wonders that humans could destroy within a generation

Luckily, the Earth is 70 percent water and there are 372,000 miles of coastline, according to NASA, so there are lots of beaches out there.

You already know plenty of great beach spots. Hawaii, St. Tropez, Fiji, Tahiti, the islands of the Caribbean — these places are synonymous with their beaches. Other places, less so, though their sand and sea are no less glorious.

Here are just a few of them:

India has more than 4500 miles of coastline, so, as you'd expect, it's got a whole lot of beaches. There are so many beaches the "list of beaches in India" is its own Wikipedia page. So many that the travel website Thrillophilia doesn't list the top five or top 10 or even top 20 beaches in India, it lists the top 50.

The Indian state of Goa and Kerala are especially popular destinations for beach-goers, and the tourism industry has developed to a point where Indian beaches are so under the radar anymore. But hey, they're not yet Fiji or the Virgin Islands.

You're probably not planning on visiting Yemen very soon, given the security situation there. (Houthi fighters just seized power in a coup, Al Qaeda militants have established Yemen as a stronghold, and the US embassy is closing.)

Yemen is home to Socotra Island — the largest island in a four-island archipelago of the same name — which sits in the Indian Ocean approximately 240 miles south of mainland Yemen and 150 miles east of the Horn of Africa.

The flora and fauna on Socotra evolved in isolation, which created remarkable biodiversity and a unique ecology that's earned the archipelago comparisons to the Galapagos. A third of the flora on Socotra exists nowhere else on Earth.

Around 50,000 people live on the island, most of them fisherman, farmers, or nomadic Bedouins.

There's no shortage of beachfront in Greece, but you can enjoy the pleasures of Ioanian Sea just as much if you cross the northern border into Albania. Ksamil is a coastal town with four small islands off its shore. The area is part of the Butrint National Park, a UNESCO World Heritage Site.

Tunisia was the birthplace of the Arab Spring. It also has tremendous beaches. This one is located in Djerba, a small island off the coast.

Neighboring Libya has a similar coastline, and as recently as 2012 NBC was speculating it could develop a vibrant tourism industry, but its ongoing civil war has turned the country into a no-go zone.

Sure, Spain's Mediterranean coast is glorious, but so is its north coast, where you'll find Asturias. Its beaches, like the Playa de Toró above, are as lovely as its mountains and verdant wilderness, so you'll want a good pair of hiking boots to go along with your flip-flops.

Vama Veche is a beach town on the Black Sea near the Bulgarian border. It’s known for its bohemian, countercultural, libertine culture. Locals worry that gentrification is threatening to change its ways, but when VICE visited in May 2014, everything seemed to be in order.

Looking at the beaches in Crimea, like this one in Yevpatoria, you'd never guess they're smack in the middle of a geopolitical face-off between Russia and the West.

Sharm el-Sheikh, located at the southern tip of the Sinai Peninsula, is Egypt's premier vacation spot. But the country's entire coastline along the Red Sea is filled with spots like this one — Carnelia Beach in Marsa Alam.

There are more sandy gems as you head south along Africa's west coast. Watamu, Kenya is home to a national marine park and reserve that's an ideal destination for snorkeling and diving. This view is from the Hemingway Resort.

You've got endless beach options in Indonesia, Malaysa, and the Philippines, but don't sleep on Japan. The Izu Peninsula has beaches that look like this one, Tatadohama. And it's got hot springs.