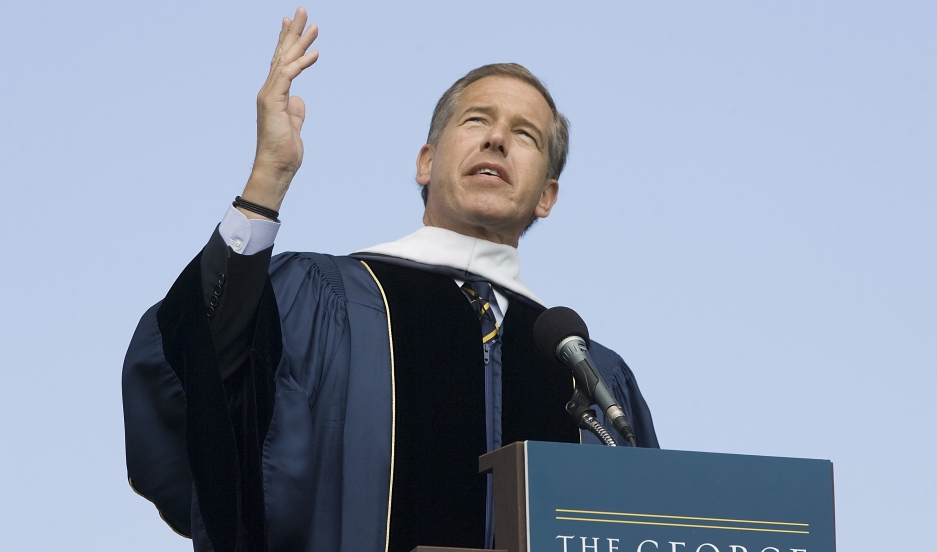 To me, the Brian Williams saga is at once irresistible and deeply sad — a puzzling, stratospheric fall from grace that’s almost Shakespearean.

Network anchors are both superfluous figureheads and the princely Hamlets of our time, anointed and burdened with a role that outwardly confers its significance but inwardly denies it.

Last week, I succumbed to the temptation to nastily tweet along with the gleeful multitudes about Williams’ credibility crisis. But in hindsight, and beyond NBC's decision Tuesday night to suspend him for six months, it is a story deeper than any of the petty graffiti from possibly jealous colleagues.

And for me, it’s personal.

There was a guy who sat next to me at Ross Corners Elementary school in Vestal, New York named Brian Williams. He was perfect. Perfect penmanship, grades, behavior, and crisply pressed clothes that made him look like a little IBM executive (all of our dads worked at IBM in nearby Glendale).

That Brian Williams was clearly bound for greatness. He was so infuriatingly and effortlessly perfect that there was an expression coined in our house: “That’s such a Brian Williams kind of thing” meant something so perfect that it was unattainable. You had to be born with the whole “Brian Williams” package.

Brian moved away by fifth grade. I never heard about him again. Then in 1993, when I came to New York and started working in television, I ran into a rising star named Brian Williams almost immediately. He was hired at NBC News the same year that I was hired at ABC News. He so clearly appeared to have the “Brian Williams” package of my childhood that I did some investigating to see if he was the same Brian Williams from Vestal, New York.

Veterans: What experiences have you had working with journalists?

He wasn’t, but he was from a town right nearby in Elmira, New York. And the way he carried himself seemed to confirm this idea of a “Brian Williams” kind of person.

When I was hired by NBC I became Brian’s network colleague, although he moved in a much loftier circle than I did. He was a nice guy, it seemed, but he was all TV, all anchor, and it was clear that in the race to see who might someday replace the untouchable Tom Brokaw, Brian was “The One.”

When NBC launched MSNBC in 1996, Brian and I were among the correspondents in the news division that were drafted to anchor programs. His would be the front man of a “Nightly News” style evening broadcast, “The News With Brian Williams”—a safe, untouchable bullpen for Williams until Tom Brokaw retired.

My show, on the other hand, was a high-risk weekly experimental interview program on issues and culture that showcased the work of documentary filmmakers. It was called “Edgewise.”

The “News” lasted from 1996 until 2002 when Brian was officially selected to replace Tom Brokaw. "Edgewise" did not make it a year. This was confirmation that the “Brian Williams” forces I had encountered in elementary school 30 years before were still potent.

In late August of 1996, I was in Chicago as part of MSNBC’s coverage of the Democratic National Convention. I was anchoring specials on politics nestled in and around Brian’s prime time coverage. As usual, the convention had been a completely boring affair. On the night before President Clinton’s ritual official nomination, I came back to the hotel to find Brian beaming with an almost giddy smile.

“This is the big one,” he said to me. “This is why I got into this business.”

Brian and the entire press corps were convinced that what came to be known (and then quickly forgotten) as the Dick Morris scandal was going to change the course of the campaign. A brilliant and ruthless Clinton operative had been caught with prostitutes and the whole thing played for a few days, evolving into some unseemly and familiar Clinton narrative. But it was clearly only about Morris, who eventually resigned in disgrace.

Whether Brian meant it or not, when he said that such moments were why he got into broadcasting, I knew that was not why I had become a journalist. That moment taught me the difference between a reporter and an anchor.

'In an Effort to Honor and Thank a Veteran, I Made a Mistake'

Reporters want to uncover something important. Anchors want to speak to an audience and are especially excited about breaking into programs with a “We interrupt this program with breaking news…” It’s that kind of reassuring authority that seems to stop the world in its tracks.

I have worked with many anchors and they all have enormous burdens of destiny and identity to carry. Dan Rather was a storm chaser in Texas until some big stories like the Kennedy assassination and Watergate made him a plausible successor to Walter Cronkite. Rather was always an outsider in some sense. He had to fight the doubts that came with being unanointed. He was not one of Murrow’s boys like Cronkite—the reporters hired by Edward R. Murrow to create the CBS News brand.

The late Peter Jennings was a natural on camera and he loved traditional journalism, but he was only in his 20s when he became a network anchor for ABC. He lacked a college education and could be insecure about projecting authority. He left his first go around as anchor and for years worked in the field as a real reporter. Peter was determined to be the person who knew more than anyone else about a subject. He often was, even if he didn’t believe it.

Tom Brokaw was a veteran beat reporter but had been host of the chatty “Today Show,” which is as much about celebrities and recipes as it is about the news, when he became the sole face of NBC “Nightly News” in 1983. After he was named to the big chair he was the pretty boy anchor at the number three network for a very long time.

Eventually, Rather’s abrasive personality worked against him as an anchor and the credibility problem at “60 minutes II” finished the job in 2005. Peter Jennings was taken by cancer. Brokaw rose to the top and eventually burnished his creds by writing “The Greatest Generation” books. People who had been in the thick of WWII told their stories to a network anchor who had seen no combat as a soldier, and sometimes wondered if that was an omission for people of his generation. Those books solidified Brokaw as a person beyond TV, and it helped catapulted NBC to number one.

Brian Williams observed all of this. Now one can only wonder what special burdens of identity he carried. It was such a foregone conclusion that he was to be anchor after Brokaw that the details of his style and personality were deemed trivial. Brian rubbed shoulders with Jack Welch at GE. He went on Leno, and we were told he took the GE chopper to exotic locations to shoot his standup segments.

People at NBC tolerated his sometimes meandering live vamps and his interview questions that included a paragraph of history preceding the question mark. They admired his sense of humor and his ability to always look perfect.

Except now he isn’t. His ratings, awards and compensation have all conferred more than enough credibility for three careers in journalism. So why would he be tempted to reach for some other brass ring?

Is it that being fired on in wartime, tales of fearing for your life, the experiences of Bob Simon and Kimberly Dozier of CBS, or Bob Woodruff of ABC are so coveted that you would invent some dramatic shrapnel from the troubled war in Iraq to join a “New Greatest Generation”? The soldiers Williams went out of his way to honor in numerous public appearances represented an opportunity for him to tell his story, as if that would make it a fact.

What a tragic Shakespearean twist. The ultimate “gotcha” moment consumes a man who dedicated his life to covering them all. Williams has now given us a Dick Morris moment that threatens to overshadow Williams’ entire celebrated career.

A recent Rasmussen Reports poll found that 40 percent of Americans think Brian Williams should resign. What do you think?

True or not, Williams’ focus on his own story may have kept him selling a flawed war along with nearly everyone on TV, including the network owned at the time by one of the country’s biggest defense contractors: GE.

Who knows what would have happened if he focused instead on how the war in Iraq was fundamentally misguided, and tragic for the soldiers who fought and died, heroic as their work may have been. Had he been first with that story he might have honored veterans far better than in his questionable speeches, and maybe even have qualified to be in “The Greatest Generation” after all.

But of course none of this frenzy over Brian Williams matters. It is all just as petty as my impulse to tweet (something nasty about BW and The Alamo). Network anchors don’t much matter anymore. The Big Three who followed the Cronkite era never had successors anyway.

About all this scandal demonstrates, once again, is the power of social media that long ago robbed the old networks of their precious “We interrupt this program…” role. It’s not clear how this investigation will turnout or what the future of the last real TV news star will be, but after almost 25 years of wondering, it’s clear to me now that Brian Williams is no “Brian Williams.”

This story was adapted from the PRI news show The Takeaway, anchored by John Hockenberry.