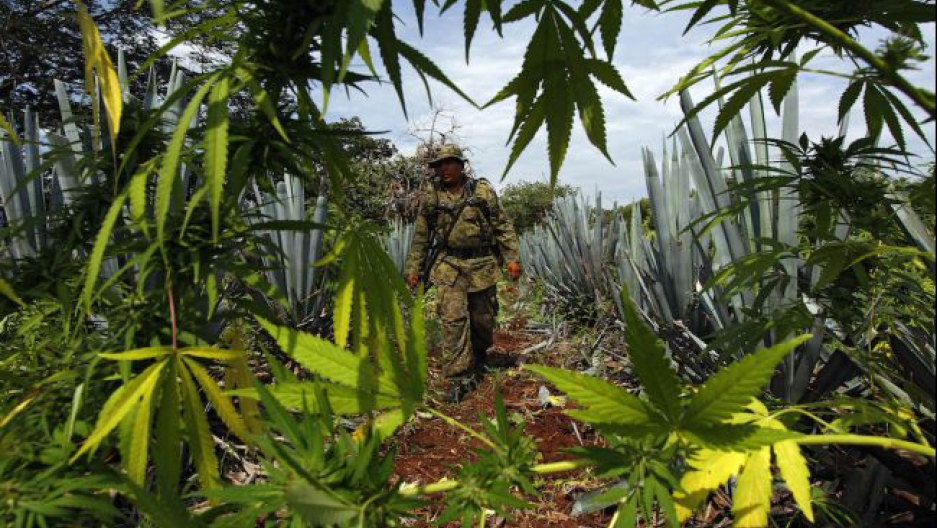 MEXICO CITY — As President Barack Obama trumpets that the United States economy is back on track, industry groups are shouting over who’s growing faster.

However, one industry may have beaten those hands down: legal marijuana.

According to a new report by The ArcView Group, a cannabis industry investment and research firm based in California, legal marijuana sales rocketed 74 percent in 2014 to a new high of $2.7 billion. And with more states legalizing weed — Alaska, Oregon and Washington, DC, voted to join the legal stoners in November — it predicts this growth pace could continue for several more years straight.

However, winners in some places often mean losers in others. And the losers appear to be south of the Rio Grande: Mexican marijuana growers, who’ve provided the lion’s share of cannabis for American smokers for decades.

In 2014, the US Border Patrol saw a plunge in seizures of pot heading northward. Its agents nabbed 1.9 million pounds of ganja, a 24 percent reduction compared with the 2.5 million seized in 2011 — before Colorado and Washington State first voted to legalize recreational marijuana.

Capturing less drugs doesn’t necessarily mean less drugs are coming over. Agents could be working less or focusing more on other problems. Yet one sign they are as vigilant as ever is that they made increased seizures of some other drugs, especially crystal meth, which was busted in record quantities.

More from GlobalPost: Here’s a meth cook who’s helping boost Mexico’s drug traffic to the US

Mexican security forces have also noted a dive in marijuana production. In the most recent figures released in September, the Mexican government said that it had seized 971 metric tons (1,070 US tons) of cannabis inside Mexico in 2013, the lowest amount since 2000.

“It looks like the US market for illegal Mexican marijuana will keep shrinking.”

“In the long run, it looks like the US market for illegal Mexican marijuana will keep shrinking,” says Alejandro Hope, a drug expert in Mexico. “The logic of the legal marijuana market is that it will force prices down. This would take out the big profits from the illegal market. A good way to make some money could be to short the prices of marijuana.”

As well as price problems, Mexican producers also have to compete with quality.

The legal US suppliers focus on high-grade weed, selling brands with glamorous names like “Skunk Red Hair,” “Sky Dog” and “Super Haze” in the S section of the shelves, to “Hypno,” “Hindu Kush” and “Himalayan Gold” if you look under H.

They are often labeled with their exact amount of THC, the ingredient that gets you intoxicated. They are also graded for their mix of indica, the strain that makes users stoned in a more knockout way, and sativa, which hits people in a more psychedelic way.

On the other hand, Mexican marijuana, known here as “mota,” is a mass-produced lower-grade crop, grown mostly outdoors in the mountains. It doesn’t have a fancy brand name, or tell you how spaced out or sleepy you will feel; it will just get you wasted.

Drug smugglers, some wearing life vests, carry loads of marijuana, according to US federal agents, as seen from a helicopter flown by the US Office of Air and Marine in September near Rio Grande City, Texas.

When advocates campaigned to legalize weed in Colorado and Washington states in 2012, they argued it was better to take the cash away from Mexican cartels and put it into taxes.

Former President Vicente Fox also made this case after leaving office when he visited a university in Boulder, Colo., in 2011.

“The drug consumer in the US yields billions of dollars, money that goes back to Mexico to bribe police and money that buys guns,” Fox said. “So when you question yourselves [sic] about what is going on in Mexico, it depends very much on what happens in this nation.”

If Mexican marijuana is now sinking, it could indeed be reducing cartels’ budgets to commit mass murder. Mexico’s total homicides have gone down during the time that some US states legalized grass. Killings reached a peak in 2011 of 22,852, and then dropped to 15,649 last year, according to the Mexican government’s numbers.

However, other aspects could have played a role, too. Among them are the capture or killing of some of the most brutal drug lords, including Heriberto “The Executioner” Lazcano, the head of the Zetas cartel whom Mexican marines gunned down in 2012.

Mexican gangs also have a range of other businesses. Not only do they traffic crystal meth, heroin and cocaine, they have also diversified into crimes from sex trafficking to illegal iron mining.

Mexican meth and heroin appear to have gone up as marijuana has dropped — at least, if narcotics seizures are the gauge. Last year, the US seized a record 34,840 pounds of methamphetamine at the Mexican border.

Still, longtime experts in illegal markets say there may not be any correlation between the hikes in some drugs and dives in others.

“There are lots of variables at play here, complicated factors of both demand and supply that create the markets in these drugs,” says Sanho Tree, director of the Drug Policy Project at Washington’s Institute of Policy Studies.

“One reason for the rise in heroin use is that many doctors have over-prescribed opiate drugs to patients,” he adds, referring to legal pain treatments. “The patients have got hooked and have later turned to the illegal heroin.”

But there’s another factor that could seriously affect marijuana market trends: Mexico could itself legalize it. In 2009, the country decriminalized the possession of small amounts of drugs, including marijuana. And citizens here as elsewhere were amazed when Uruguay became the first entire country to legalize weed in 2013.

Former President Fox is an advocate and even said he would like to team up with an American entrepreneur to import it to the United States.

If Mexico did legalize the plant, its cheaper labor costs could give it an edge over US producers. And while some consumers could want the higher-grade California strains, others could still choose the cheapest price.

“Cannabis is not unlike wine,” Tree says. “I can buy a $200 bottle of wine, if that is what I am after. But many people will prefer the cheaper, mass-market product. And if all the prohibition factors are taken out, then marijuana is really just an herb that can be produced very cheaply.”