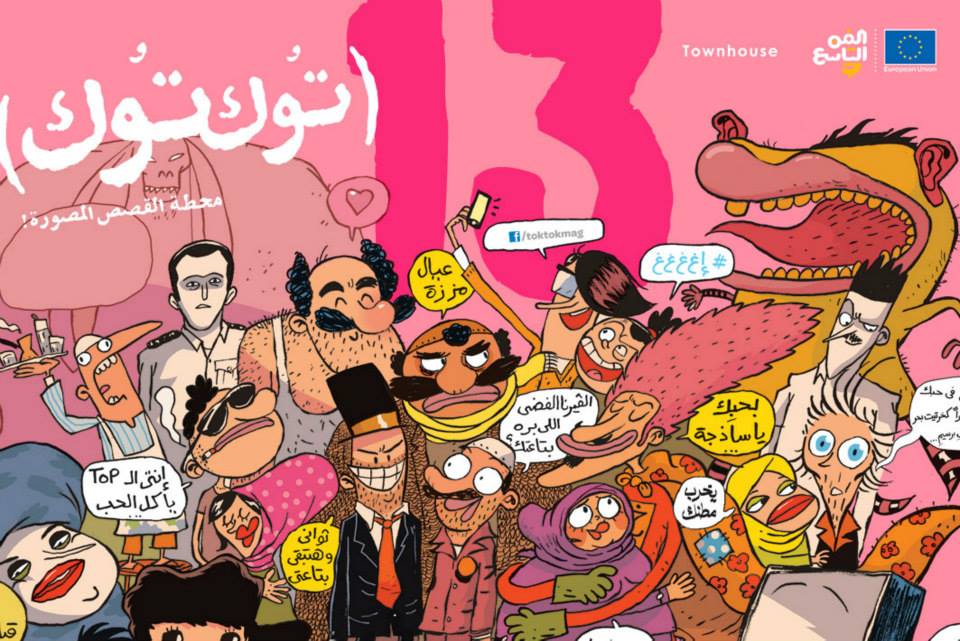 On the cover of the latest issue of Tok Tok, recurring characters in the alt-comix zine come together to wish each other a Happy Valentine's Day. Tok Tok was founded by collective of Egyptian millennial cartoonists two weeks before the January 2011 Egyptian revolution.

Egypt has been a walking, talking political crisis since its unfinished revolution four years ago. For the country's satirists and cartoonists, that's meant both opportunities and constraints.

"Cartooning has always been a difficult profession in the Arab world," says Jonathan Guyer, senior editor of the Cairo Review of Global Affairs and blogger at Oum Cartoon. Guyer says since the brutual killings at the French satirical magazine Charlie Hebdo in January, it's only gotten harder.

Egypt is a conservative, top-down, male-dominated society. Some cartoonists work for state-run newspapers. Before the revolution, they weren't drawing Hosni Mubarak and these days they're not drawing President Abdel Fattah el-Sisi either. Younger cartoonists who work for independent newspapers or publish their work on Facebook are more daring.
"A variety of young Egyptian cartoonists really stood behind the Charlie Hebdo cartoonists and against the violence," says Guyer, "but a majority of Egyptians were disgusted or displeased with the drawings of the prophet which had appeared in the publication." That negative reaction led two young cartoonists, Makhlouf and Anwar, to write a profile about the history of Charlie Hebdo for a major newspaper in Egypt.
"This was really an exciting moment of two Egyptian cartoonists talking about their influences from Europe," said Guyer. "And it wasn't a Euro-centric view, but looked broadly at how the coterie of cartoonists worldwide had reacted to these events." The response to the article — outside of cartoonists and millennial circles — was lukewarm.
But the demand for free expression, which helped kindle Egypt's revolution, hasn't abated. That may help explain the continued drive of Tok Tok, a quarterly comic magazine founded by several Egyptian political cartoonists (including Anwar and Makhlouf) just two weeks before the 2011 uprising that ousted Mubarak.
"[Tok Tok] is a movement of comic artists having fun, experimenting. It's not overtly political. It deals with all the vexing societal issues that Cairenes face," says Guyer. Like finding a place to park or seeing tea waiters on Cairo's crowded streets running between moving cars in downtown Cairo. "It's silly. It's funny. It's dark. It's colorful. It reminds me of somewhere between Robert Crumb and Art Spiegelman making fun of Walt Disney."
Egypt's revolution was in downtown Cairo and Tok Tok has a downtown sensibility. Each issue has different artists render their own take on the same issue so you see a variety of styles and story methods.  They capture the mood at the street level of Cairo. "It's not high politics, parliaments and presidents," says Guyer. "It's both fantasy and hyper-realism on things like where to park your car, how much a bottle of Coke costs." 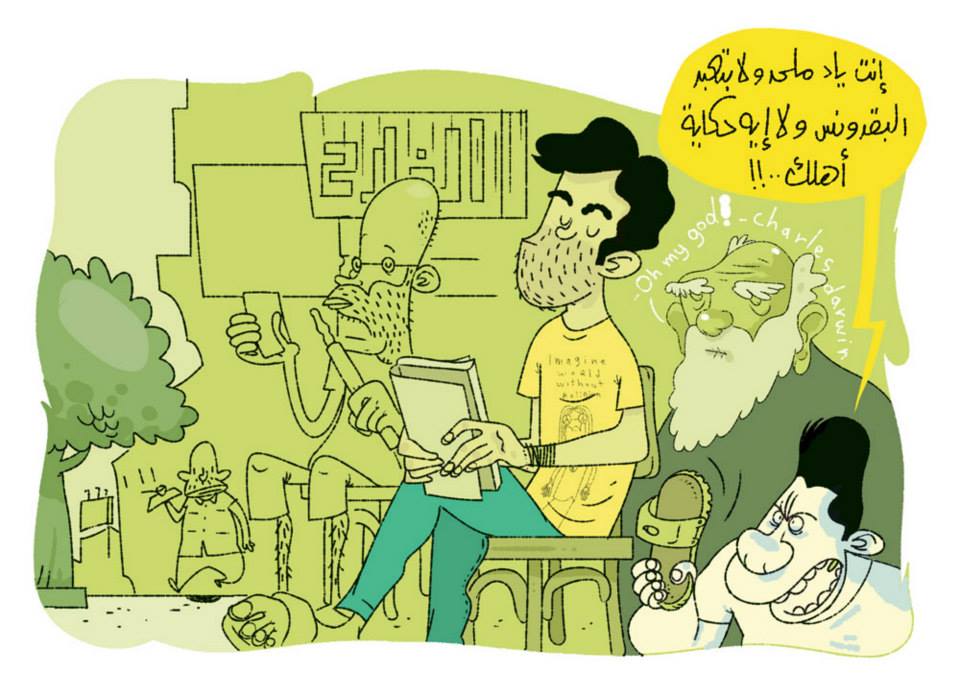 Many of Tok Tok's cartoonists have day jobs. Guyer says this is their fun job. "One thing I love about Tok Tok is that they have a lot of emerging artists. Some are dentists or lawyers by day and cartoonists by night."
Tok Tok's politics, says Guyer, are implicit. "Artists are outsiders as a rule. In Egypt they don't have a political outlet at the moment." Instead young Egyptians are expressing themselves through art, literature, culture, social media, and blogging.
In Tok Tok's last issue, there was a drawing of a poster showing President El-Sisi at his desk calling for increased ignorance as one way to solve the country's challenges. Guyer says in today's politically repressive climate, Tok Tok can engage in political provocation because it's a small grassroots publication, with a print run of only a few thousand. 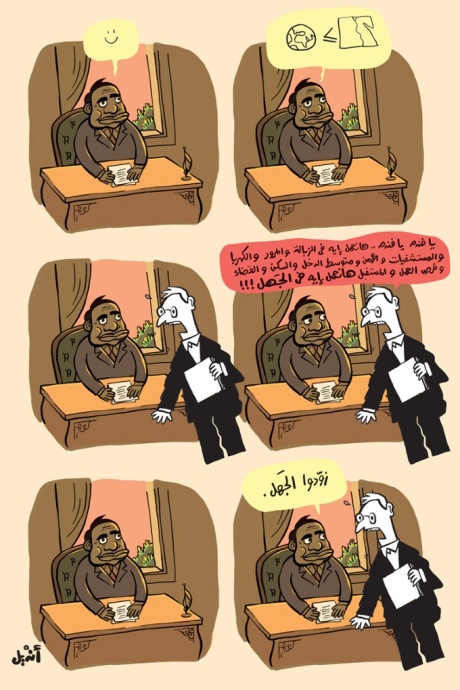 "It has a very vibrant millennial audience but it's not exactly a widespread phenomenon, so they've been able to get away with some pretty amazing art and criticism."
Asked if Tok Tok is in some ways Egpt's Charlie Hebdo, Guyer hesitates. "It might be a stretch too far but Tok Tok in it's fourth year is really coming into its own. They always sell out. You can't find back issues of Tok Tok."
On Valentine's Day, the 13th issue of Tok Tok comes out. Guyer says the release will take place in an upmarket art gallery and young Cairenes will be lined up down the block to get a coveted copy. On the cover, they've reprised about a dozen of the most popular characters thave have appeared and reappeared and they're all kind of wishing each other a Happy Valentine's Day.
"It's really an experimental space. This is a very edgy provocative and new publication that came out of the uprising and is continuing to evolve with the struggles that Egypt faces." 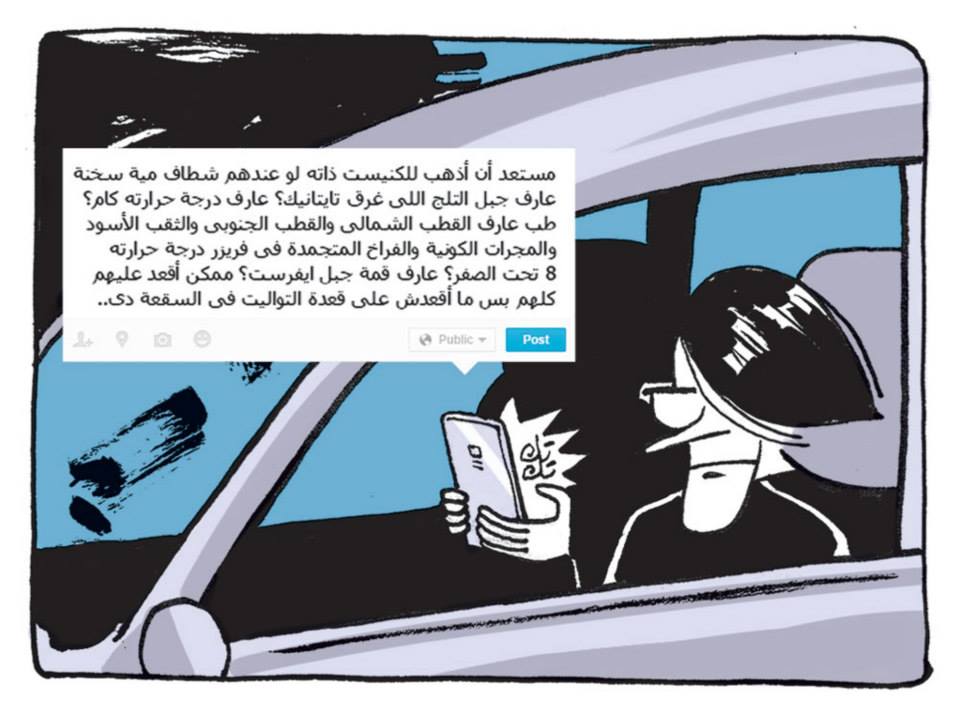