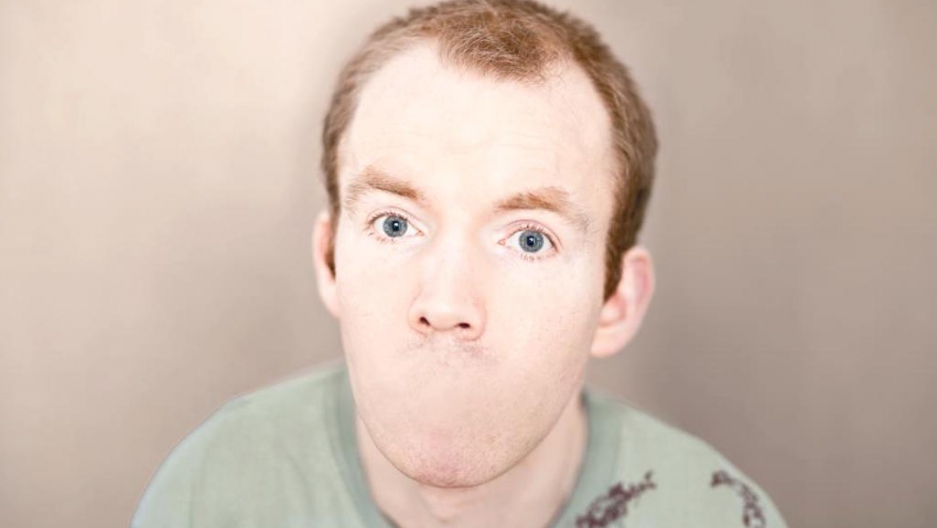 LONDON, UK — “Let’s deal with the elephant in the room. I know what you were all thinking when you saw me come on stage. Don’t worry about it. It’s fine. It happens all the time and I’m used to it by now.

“You were thinking, here comes another wanker with an iPad.”

Lee Ridley is waiting for his set to start at the Good Ship bar in Kilburn, a northwest London neighborhood once gritty and Irish that’s slowly being colonized by hipsters. He’s opening — one step below the headliner on the comedy hierarchy, steps above the two acts in between.

Ridley, 34, is an up-and-comer in the UK comedy scene. Since booking his first gig in February 2012, he’s played Edinburgh Fringe and the Leicester Comedy Festival. In December, he won the BBC Radio New Comedy Award.

The emcee calls his name and through the applause Ridley takes his place on stage, where an iPad mini is waiting atop a stool placed there in advance. Ridley taps at the screen and the voice comes on, an authoritative monotone that’s both mechanical and very human.

“I’m here to make you all feel awkward,” the voice says from the speakers, and Ridley offers a big thumbs up, and grins.

“Can you imagine how hard my life would be if I could actually talk? It just doesn’t bear thinking about! I’d have to remember how to say words, remember how to form sentences and remember all my jokes.”

At the age of 6 months Ridley contracted encephalitis, which resulted in cerebral palsy. His right side is weaker than his left — “I move like a zombie from 'The Walking Dead,'” he’s said of his gait — and his mouth and tongue muscles aren’t strong enough for him to speak.

That’s the origin story of Lee Ridley, aka Lost Voice Guy, the first and only stand-up comedian (as far as he knows) who can’t speak.

The crowd at the Good Ship titters nervously at first. Then it warms up, until a wicked joke comparing him to Anne Frank gets the first big laugh of the night.

His jokes poke fun at disability, and at the awkwardness of people who encounter people with disabilities, and the frustrations that speaking with an electronic voice brings. They include being hung up on by people who think he’s an automated call, and competing with taxi drivers’ GPS systems.

By the time he’s left the stage, he’s won the crowd. In the ladies’ bathroom, a woman who has been sucking on Coronas like baby bottles all through the set screams to a friend behind the stall door: “That Lost Voice Guy was fucking brilliant!”

“I’m very tempted to go see 'The Theory Of Everything,' sit at the back, and fuck with people’s heads.”

Offstage, Ridley speaks with the aid of a Lightwriter, a small typewriter-like device on which he types with one finger. His words appear on two small screens as he types — one for him, and one for the listener — and are spoken aloud when he presses a button.

He describes his voice as “posh RoboCop,” with the soothing cadence of a children’s television narrator. In a perfect world, it would speak with a Geordie accent, the nickname given to people from Newcastle, where he lives.

Ridley studied journalism at the University of Central Lancashire, and was working in a city government press office in northern England when friends first encouraged him to do stand-up.

His first show was in February 2012 at the Stand, a beloved Newcastle comedy club, and his career took off from there.

A year ago, he cut back to part-time work at the Sunderland City Council to leave more room for his comedy. The BBC award came with an opportunity to write a radio show, which he’ll be working on this year.

His career highlight so far was opening in September 2012 for his idol, the British comedian Ross Noble. Ridley first met the comic at one of his shows in 2009. Noble did an onstage impression of the British physicist Stephen Hawking, who has motor neuron disease and communicates with a synthetic voice as well.

When Noble left the theater, Ridley was waiting for him outside.

“Do you want to have a competition to see who can do the best Stephen Hawking impersonation?” he asked. The meeting made its way into Noble’s next DVD.

There are other comics with cerebral palsy, like Josh Blue and Maysoon Zayid in the United States, and Tim Renkow, an American working in London. A touring UK show, Abnormally Funny People, features stand-up comedians who all happen to have have some kind of disability.

Lee Ridley at The Stand Comedy Club in Newcastle.

But not being able to speak presents a comedian with a daunting set of conditions.

Ridley can’t mug his way through a dragging bit or punctuate jokes with physical comedy. When his technology fails, as it does briefly at the start of the Good Ship set, he can’t call up to the sound guys for help. He just has to wait until it becomes clear the pause isn’t part of the act.

He tells his jokes through an app called Proloquo2Go. The technology is great but not perfect. It’s difficult to control a joke’s pacing once it starts, making it harder to rush through a bombing joke or pause for audience laughter at a successful one.

It’s also a lot harder to incorporate the type of impromptu audience banter most stand-ups rely on. This is something Ridley’s trying to do more often.

“You look nice and friendly. What is your name?” he asked a woman in the audience at the Good Ship.

He leaned over the iPad and typed. And typed. The silence stretched uncomfortably long.

Then he stood up, and to much laughter, the app said, “Good.”

“People often ask me why I want to put myself in a position where everyone can stare and laugh at me. It happens to me every day anyway. At least this way there’s a scheduled time and place for it.”

The next comic onstage at the Good Ship is a fellow BBC New Comedy finalist named Thomas Ward. He spends a lot of the act fending off catcalls from a feisty redhead.

Everyone’s a few more drinks in, but there’s a sense that the audience was maybe pulling their punches with Lost Voice Guy, that they put themselves on their best behavior when a disabled man was onstage.

Ridley hasn’t been heckled yet, which disappoints him. He has comebacks all programmed and ready to go. It seems like even the irreverent atmosphere of a comedy club can’t override people’s deep-seated belief that publicly harassing a disabled person is an asshole thing to do.

The internet, on the other hand, is full of assholes.

“Congrats, you’ve found the easiest way to do comedy, write shit on a laptop and get that to remember and say it for you,” a comedian named Robert James Alexander tweeted at Ridley after his win.

A screenshot of some criticism of Ridley.

“I don’t like being pedantic, but this isn’t 1998, and I clearly don’t use a laptop,” Ridley wrote in a blog post mocking the disgruntled comic (who deactivated his account soon after).

This is not the stupidest thing that anyone has ever said to him. He has been approached after shows on multiple occasions by people who ask if he really can’t talk. Sometimes people insist on writing their side of the conversation down for him. He’s too polite to tell them that he’s not deaf and that’s not necessary.

Perhaps more frustrating are the conversations he can’t have. Ridley thinks fast, but he can express himself only as fast as his finger will allow him to type. In a group setting, the moment often passes before he can key in a joke or a witty reply.

Having much more to say than your body will physically allow you to express can be a depressing and isolating experience.

“It does get to me at times,” Ridley says the next day in the lobby of his London hotel. “It doesn’t help that I travel a lot and have a lot of time to think. My brain doesn’t want to turn off. Having a sense of humor helps.”

Comedy has given him a chance to present himself as he wants to be seen, he said. It’s made him more confident, and more comfortable in social settings.

At his first stand-up gigs, he could sometimes hear the gasp as he made his way to the stage. He doesn’t hear it anymore, and “maybe that’s partly because I am more confident and don’t feel the need to notice it.”

His increasingly visible profile has also brought attention to people with communication challenges. He’s the patron of two different UK charities that assist people with speech difficulties, Find A Voice and Communication Matters.

At his London gig was a 31-year-old London playwright with shocking pink hair named Katie Caryer. Caryer has cerebral palsy and uses a wheelchair. Her communication aid’s dazzlingly complex keyboard has a few buttons for quick response options, one of which is “Shut the fuck up.”

How did it feel to see someone who speaks the way she does up on stage, owning the room, and making everyone laugh?

Her response was immediate: “Best feeling ever.”

All jokes in pullquotes courtesy of Lost Voice Guy.