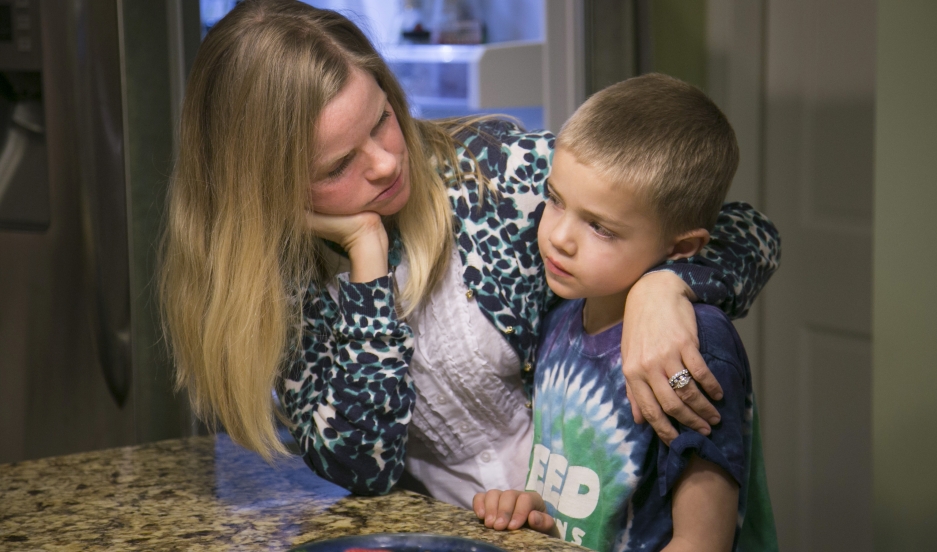 Jodi Krawitt holds her son Rhett, 6, in their home in Corte Madera, California. Rhett is recovering from leukemia and his father is concerned his child could succumb to an outbreak of measles at his Northern California school. Krawitt is asking officials to bar entry to any student not vaccinated because of a family's personal beliefs.

The measles outbreak at Disneyland has reignited the debate over whether parents should be required to vaccinate their kids.

The question is straightforward: Does the government have the right to tell parents they must inject their children with a cocktail of dead or weakened disease germs, if the aim is to protect the larger society from serious diseases?

Republican Senator Rand Paul of Kentucky threw gasoline on the already-heated debate when he recently spoke with CNBC.

"I've heard of many tragic cases of walking, talking normal children who wound up with profound mental disorders after vaccines," he said. "I'm not arguing vaccines are a bad idea. I think they're a good thing. But I think the parent should have some input. The state doesn't own your children; parents own their children and it is an issue of freedom."

Still, free societies depend on the public having access to reliable information. That's one reason governments accredit physicians and medical journals have careful independent review systems. The aim is to prevent scientists from injecting false and misleading findings into public debate.

Yet, that's exactly what Andrew Wakefield did. He was a surgeon and medical researcher who published the infamous — and now discredited — study that linked vaccine injections to autism.

“The United Kingdom doesn’t export much these days,” says Brian Deer, an investigative journalist for The Sunday Times of London and the man that exposed the faulty science behind Wakefield's study. “But one of the things it has exported twice has been scares over vaccines.”

In the 1970s and 1980s, Deer says that Londoners exported a scare over the diphtheria, tetanus, and pertussis (DTaP) vaccine to the United States, which he calls a “complete red herring.”

And then in 1998, Wakefield’s research claiming a link between vaccines and autism hit like a bombshell. Parents of autistic children felt they finally had a scientific explanation for why their kids' behavior had suddenly changed.

“Because you have so many parents out there looking for answers and rushing to look at their children’s medical records, when someone comes along and says, ‘Well, could it have been a vaccine?,’ you get this explosive mix,” says Deer. When Wakefield’s study reached the media, hysteria quickly set in.

The problem was that researchers who tried to replicate the study continually failed to find a link between vaccines and autism. It was only later revealed that Wakefield was working directly for a team crafting a $56 million lawsuit that was seeking to link the measles, mumps, and rubella (MMR) vaccine to autism.

Skepticism regarding Wakefield's claims continued to mount until the issue came to a head with a 2004 investigation by Deer. He found that Wakefield failed to disclose he was funded through solicitors seeking evidence to use against vaccine manufacturers.

“The British General Medical Council, who took away his license to practice medicine, found him guilty of four counts of dishonesty involving his research,” says Deer. “[That included] a dishonest description of the children enrolled in it.”

“All of [those comments] followed the most detailed and evidence-based investigations in the history of medicine,” says Deer.

Deer theorizes that one of the reasons the vaccine myth has been able to prevail throughout the years is because of the Internet.

“People like that can find each other,” says Deer of the so-called “anti-vaxxers.” “It’s like the people who believe that Barack Obama wasn’t born in the United States or that the US government is responsible for the World Trade Center collapsing. What you have in this particular case is a number of people who claim that [the anti-vaccine movement] has been scientifically verified when, in fact, it hasn’t.”

Deer says that despite a lack of science, anti-vaccine conspiracy theorists have been able to cut through the debate because politicians like Sen. Rand Paul validate their stances in the name of libertarianism.

“There are people for whom it is important to believe that they are smarter than doctors,” Deer says. “That’s not a left or right thing — it’s quite often a class thing." He notes that in Britain, vaccine rates have declined in the more affluent areas.

This story is based on an interview that appeared on the news show The Takeaway.