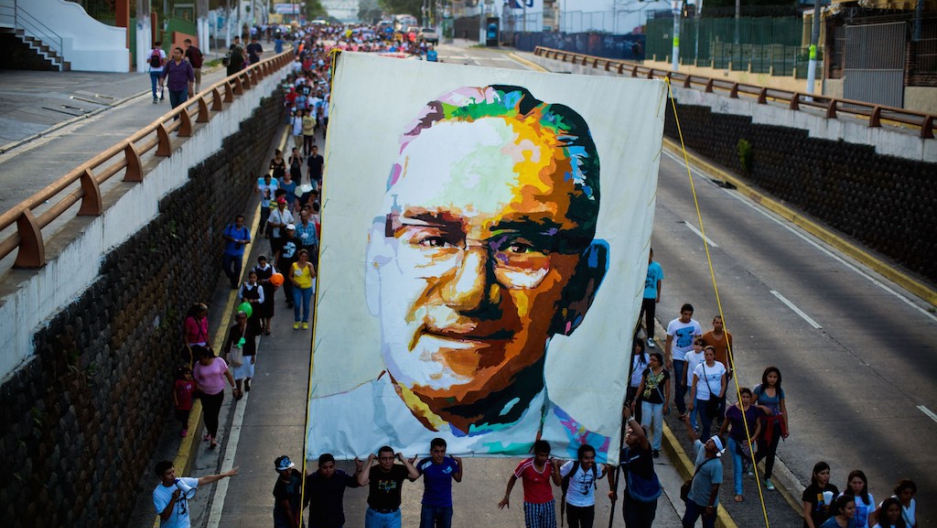 A march in San Salvador on March 22, 2014 during the commemoration of the 33th anniversary of the murder of Monsignor Oscar Romero.
Credit: JOSE CABEZAS
Share

MEXICO CITY — Salvadoran Archbishop Oscar Romero was preparing the holy bread for communion when an assassin fired his rifle down the aisle. The single shot felled the 62-year-old and soaked the wafers with his blood.

It is hard to imagine a more dramatic tale of martyrdom.

Yet following that 1980 murder, it took the Vatican 17 years before considering Romero to be canonized, and another 17 years before it officially recognized him as a martyr, making him eligible for sainthood.

When Pope Francis finally announced Tuesday Romero would be beatified, his supporters celebrated in the churches and streets of San Salvador.

The reason it took the church so long to make this call lies in the clerical politics that strike through the heart of Catholicism.

Romero is a hero of the liberation theology movement, a left-leaning interpretation of scripture that says the clergy should fight alongside the poor for social and economic justice.

The day before his death on March 24, 1980, he had called on soldiers of a right-wing government to stop the torture and murder of people they accused of supporting leftist guerrillas.

After his death, about 75,000 people were killed during a decade of civil war in one of the most brutal Cold War battlegrounds in Latin America. The United States backed the Salvadoran government, supplying it with arms and military advisers to fight the guerrillas.

Both Pope John Paul II and Pope Benedict XVI aligned with the church’s conservative side. However, church insiders say the main opposition to Romero’s martyrdom came from Latin American conservative clerics, who feared liberation theology would undermine their teachings.

These clergy members argued Romero’s murder was due to his politics, not his religion. But when the Vatican finally ruled Tuesday, it determined the killing stemmed from “hatred of the faith.”

Romero has become a hero not only to some priests but also to leftist activists and politicians across Latin America, with banners of his face being held up alongside Argentine revolutionary Ernesto “Che” Guevara.

On Tuesday, the left-leaning Salvadoran government, headed by a former guerrilla, applauded the Vatican’s decision on Romero.

“Salvadorans are proud that [the church] finally recognizes the martyrdom of Monsignor Romero, who through his pastoral work gave hope and voice to the underprivileged, and whose message is still alive and relevant to us,” Salvadoran Foreign Minister Hugo Martinez said.

Latin America’s first pope, Argentine-born Francis is not himself considered a liberation theologian, but his ratification of Romero is not his only nod to the church’s left side.

On his recent visit to the Philippines, he used liberation-style language. “The great biblical tradition … bids us break the bonds of injustice and oppression, which give rise to glaring and, indeed, scandalous social iniquities,” he said on Jan. 16.

Father Carlos San Martin, who serves in a poor gang-ridden barrio in San Salvador, also feels that Pope Francis is encouraging the church to help the downtrodden. “His message is for priests to be committed and help social causes, to labor in the community,” San Martin said.

However, with the Cold War gone, such talk is less controversial. The region’s leftist governments, including the one ruling El Salvador, now work with big business as they argue for more equal societies.

Bringing in the church’s left wing could simply be a way to help strengthen it, especially in Latin America, home to an estimated 40 percent of the world’s baptized Catholics.

Romero himself was actually less of an advocate of liberation theology than many of his supporters. He chastised elements of communism and Soviet aggression as well as dictatorships. In many of his sermons, his message was simply against all bloodshed. This resonates in a region that is home to the majority of the world’s most violent cities.