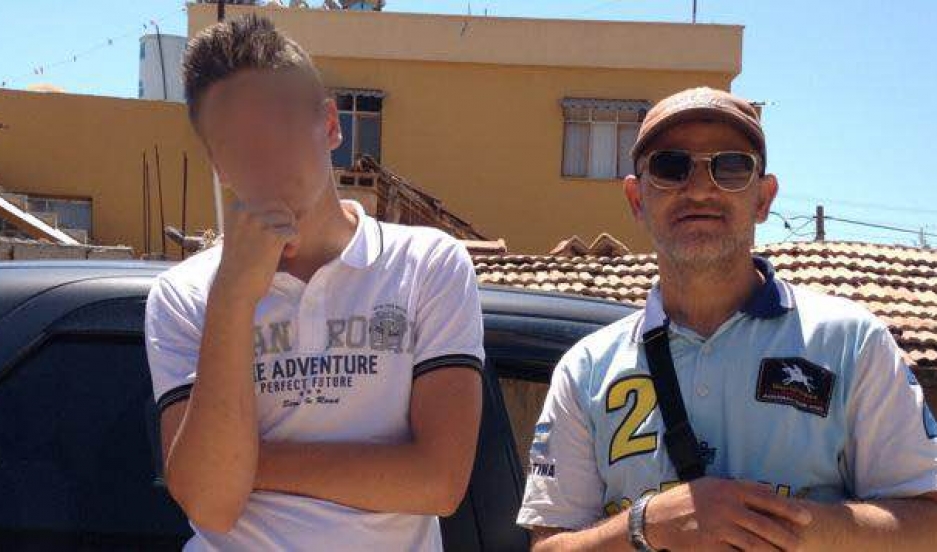 Abderrazak and Alexandre Cherif in Hatay, Turkey. Alexandre's face is blurred because he's minor who is currently in French prison.

On a Saturday night in November 2013, Jordan and Alexandre, two brothers from the French city of Nice, told their mother they were going out clubbing. The next morning, they still hadn’t come home. Their parents had heard nothing from them all night.

Their father, Abderrazak Cherif, remembers his wife, Myriam, asking around in their working-class neighborhood east of Nice. She came back in a panic.

“She tells me there’s a rumor about kids who left to Syria,” remembers the 54-year-old Tunisian immigrant, but he didn't think much of it. “I’m not really into gossip, and even if I hear stuff like that, I’m just thinking those are crazies. For me all of that is so far away it’s like talking about the moon. It’s got nothing to do with me or my kids.” Myriam, his wife, isn't even Muslim.

At around noon, Abderrazak and Myriam went to the police to report the brothers missing. They weren’t troublemakers, their father says. Jordan, 23, was working the night shift at a bakery, making croissants. Sixteen-year-old Alex had just started a job at a local supermarket.

The police told Abderrazak and his wife to stay put.

The next day, the doorbell rang. When Abderrazak answered, he found only a letter on the floor, signed by his two sons. In it, the boys explained that they loved their parents but felt drawn to Syria to “help their brothers and sisters.”

“I felt like death was closing in on me,” Abderrazak says. “I was numb, like I was going to have a heart attack and pass out. Myriam was screaming as if she saw her two kids dead in front of her.”

The police transferred the case to a French intelligence agency. Abderrazak says the two agents told him there were around 50 similar cases in Nice alone, but that he was the first parent who showed up in person. “Good for you for talking to us,” they said — but they didn't say much else.

The first ray of light came a few days later from Alex, his youngest son. "Nour, my elder son who’s still in Nice, tells me I have a message. ‘What message?,’ I ask him," Abderrazak says.

Alex had secretly set up a Facebook account for his father before he left for Syria. "That’s when it hit me: He left, but he was already thinking of coming back," Abderrazak says. "He did that to stay in touch, because he cared and he knew he’d be back. He hadn’t been completely uprooted. There was still a connection. That meant it was possible to bring him home.”

Before the Facebook message, Abderrazak says, the Internet "wasn’t my thing." Now he immersed himself in the world of online jihad. He spent every waking hour learning about Syria’s most radical groups and men like Omar al-Diaby, the man believed to be France’s top recruiter of jihadis and who also hails from Nice.

This was how Abderrazak would win his sons back: He would embrace the religious rhetoric of those who lured Jordan and Alex in, then flip it on its head. He and Alex spent hours dissecting a single line in the Koran. “You’re a minor,” he told his son, “the holy book says you can’t go to jihad against your parents’ will.”

An open war broke out between rebel groups in Syria. Alex and his brother were part of a group of French jihadis who hadn’t aligned itself with any of the Islamic radicals. They found themselves caught up in the fight between different brigades, including an ascendant ISIS.

“One night he called his mum, and we hear ‘boom boom boom’ over the phone," Abderrazak remembers.

"Dad, we’re stuck in Aleppo and there’s shooting everywhere!" Alex told him. "There are two groups killing each other and we’re stuck in the middle.”

“They stayed there for a day and a half and he called us 11 times," Abderrazak says. "He was scared to death, that’s why he called! At one point he said it: ‘Dad, we’re gonna die here.'”

Alex wanted out. Abderrazak knew he had to help, and fast. But without any support from French authorities, it took him five months to collect about $4,000 — enough money to go to Turkey and fetch Alex, plus a little extra for emergencies.

Finally, in late June, Abderrazak checked into a hotel in Turkey near the Syrian border to wait for his son.

“It was a little before seven in the morning and I hear banging on the door. I knew right away that was Alex ... It’s like I could feel the love," Abderrazak says. "He was covered with mud, poor thing, and he hugged me. He hugged me so tight. 'You came!' he kept shouting. 'You came!' I was overwhelmed. I couldn’t let go of him. Nothing would have taken me away. We stayed like that for hours. Just me and him. No coffee, no breakfast, no one else.”

Later in the morning, the pair went to the food court of a mall, where Alex gobbled down three hamburgers. Abderrazak asked his son what kind of food they had in Syria. Mostly lentils, Alex replied.

Then he dragged his dad to a game room to play foosball. For Abderrazak, it felt like the stars were aligned. Everything had gone quickly and smoothly  — until the pair flew back to France.

Abderrazak says French intelligence knew everything. He says he updated the police about his potentially suspicious online activities, and even offered to have his phone tapped and his Facebook page monitored,

His trip to the Turkish border had also been cleared, he claims: "They encouraged me to bring Alex back to Nice. They told me, 'Spend the first day with him at home, then come to us for a debrief. We might keep him a day or two, that’s it.'”

But things went off the rails right after the pair landed in Nice. First Alex’s passport was confiscated. Then he was taken into custody and put on a plane to Paris.

Seven months later, he's still locked up. The charges against him include manslaughter during his time in Syria. Alex denies the claim, and his lawyer says there isn’t any consistent evidence.

But for Abderrazak, the whole case boils down to something much simpler.

“For me, the message from authorities is, ‘You shouldn’t have brought him back,'" he says. "They're using my son to send the message to all the French in Syria: Don't come back. I don’t see any other reason why he’s still in jail."

The first one who got the message was Jordan, Alex’s brother. Abderrazak says Jordan is ready to leave, too — but where would he go? If Alex, a minor, can’t get out of jail, what would happen to his older brother? Abderrazak won’t bring him back to France.

He says the recent attacks in Paris should be a wake-up call for French authorities. More than 1,000 French citizens have gone or plan to go wage jihad, according to authorities, and Abderrazak says they’re squandering a chance to have people like Alex on their side.

“Someone like Alex, it’s like he’s been vaccinated now. When he goes back to the neighborhood, he’s going to do the work no cops can do with the youth here," he says. "No one trusts the police, so the message doesn’t go through. But my son, he went to Syria, and his story will be the best antidote. Instead, he’s rotting in jail ... What’s the point?"

A few weeks ago, Abderrazak got a call from the prison in Paris: Alex was unstable, he was told, bordering on suicidal.

“Syria didn’t kill him, it didn’t crush his spirits,” Abderrazak says. “But more time in jail will.”