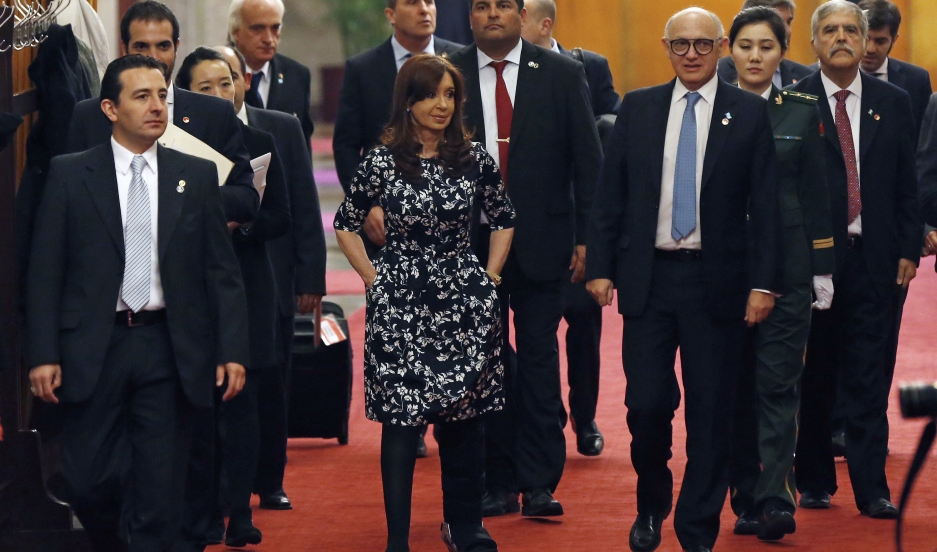 Argentina's President Cristina Fernandez de Kirchner walks on the carpet before a meeting at the Great Hall of the People on Wednesday. Fernandez, on a tour of China to strengthen ties as the economy teeters on the brink of a recession, appeared to commit a diplomatic blunder on Wednesday by poking fun at how the Chinese speak.
Credit:

Oh does it ever stop for Argentine President Cristina Fernandez de Kirchner? She's in the midst of an apparent murder scandal in Buenos Aires. But during her state visit to Beijing, she created another fine mess.

Fernandez went to China to seek trade deals for Argentina on such things as rice and petroleum exports. So what does she do: She posts a tweet mocking the way she says Chinese pronounce their r's and l’s as in “lice and petloleum.”

Joanna Lee, who is a Chinese translator and an expert on US China cultural exchanges, says before mocking the way Chinese speak, maybe President Fernandez should try “to speak some Chinese without an accent.''

Some observers on social media have writen off the president's offensive tweets, suggesting that maybe she’s seen a few too many Charlie Chan movies. Others treat it more seriously, saying it’s a case of derisive, maybe even ignorant, racist humor. Lee is a bit dumbfounded that a friendly head of state would mock another country in such a tactless way during a presidential trip. “I really cannot even imagine what went through her mind when she posted it but I did read that she did post a very short apology after people in Argentina created a huge uproar.”

More on translation and culture

Still Fernandez’s comments may reflect a cultural prejudice, says Lee, and they “seem to come out of some strange sitcom from the 1950s in America, so that's a little bit sad.“

The Chinese reaction on Twitter, Lee says, reveals a number of perspectives. “Some don’t agree that it’s a kind of racial discrimination, and others say, ‘Please Madam President, why don’t you try to speak some Chinese to us,’ and then there are some people who are rather cocky in their response, noting that Argentina isn’t a very big country.”

When asked to provide a short list of do’s and don’ts on how to be respectful to your Chinese host, Lee offers this advice: “Please just follow or be aware of their sensitivities, language is one, another one is food. I travel a lot with foreign guests going into China, and the thing is, even if you don't like to eat something, be aware and acknowledge the feelings of your hosts who clearly do their very best to make sure that you have the best culinary experience. Just eat something, even if it's just a bite, eat it.”

She has one more tip for visiting heads of state: “Whenever one visits a foreign country, I’d say the first thing is don’t tweet!”