US President Barack Obama and Dutch Prime Minister Mark Rutte both favor "uh" (or "eh" in Dutch) over "um." Younger people and women are more likely to say "um."

According to experts, “uh” and “um” are somewhat different beasts. “It does seem to be the case that ‘um’ generally signals a longer or more important pause than ‘uh,'" says Mark Liberman, a linguist at the University of Pennsylvania. At least that's what he thought.

Liberman has been studying these so-called “filled pauses” for almost a decade, and he has made a rather curious discovery.

If you look at “um,” exactly the opposite is true. Younger people say “um” more often than older people. And no matter the age, women say “um” more than men. Nobody, not even the linguists, were expecting this result; until they studied these hesitations, they thought it was more about the amount of time a speaker hesitates than who that speaker is.

Then, late last summer, Liberman attended a conference in Groningen in the Netherlands. During a coffee break, Liberman was chatting with a small group of researchers. He brought up his finding about the age and gender differences related to “um” and “uh,” which prompted the group to look for that pattern outside of American English. They scanned British and Scottish English, German, Danish, Dutch and Norwegian.

The result, says University of Groningen linguist Martijn Wieling, is that, “in all cases, we find the same thing.” Just like the Americans that Mark Liberman analyzed, women and younger people and younger people said “um” more than “uh.”

Wieling's conclusion is that we are witnessing a language change in progress, “and that women and younger people are leading the change."

The future of "um"

This pattern of women and young people leading us forward is typical of most language changes. But why is “um” our future, across at least two continents and five Germanic languages? It's still a puzzle. 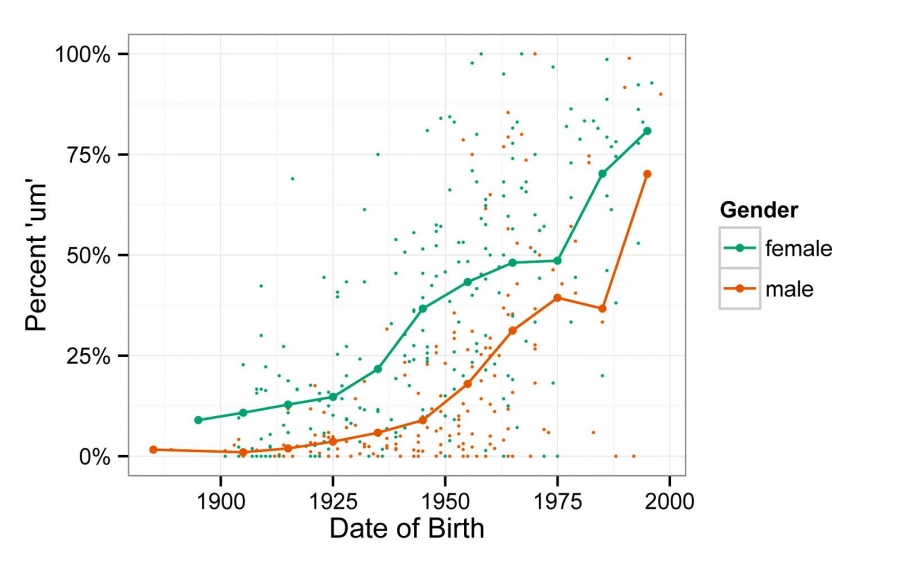 Josef Fruehwald's research suggests that the use of 'um' is preferred among females and young people.

Josef Fruehwald, a sociolinguist at the University of Edinburgh, agrees that “um” and “uh” may be used slightly differently. But as far as he is concerned, they are pretty much equivalent.

“When you have two options, you can start using one more frequently and maybe replace the other one so that it’s no longer an option,” he says. “So why ‘um?' It’s just one of these things. There’s always a little bit of randomness to the whole situation.”

By random, he means that we do not know why changes in usage like this happen, or when the next one will be. Fruehwald admits linguists are terrible at predicting the future — worse than meteorologists! Language, he says, is even more chaotic than the weather.

As for how such a linguistic trend might have jumped from one language to another, Fruehwald says "there are some documented cases of that kind of thing happening, usually where people can speak both languages and borrow features of one into the other.”

English is the most likely to be influencing the other languages, but we still don't know whether that's actually what's happening with “um.” More research and more linguists are needed.

And as for the future, “um” and “uh” may yo-yo back and forth in terms of their popularity. Or we may well be watching the extinction of “uh” from our lexicon.

So would Fruehwald miss “uh?". “I don’t have a really strong emotional connection to either of these," he admits. "Although based on my age demographics, I’m likely a high ‘um’ user. So maybe that’s where I should throw my loyalties.”

Patrick Cox adds: Also in this podcast episode, a conversation with Michael Erard, editor of Schwa Fire and author of "Um...:Slips, Stumbles and Verbal Blunders, and What They Mean."