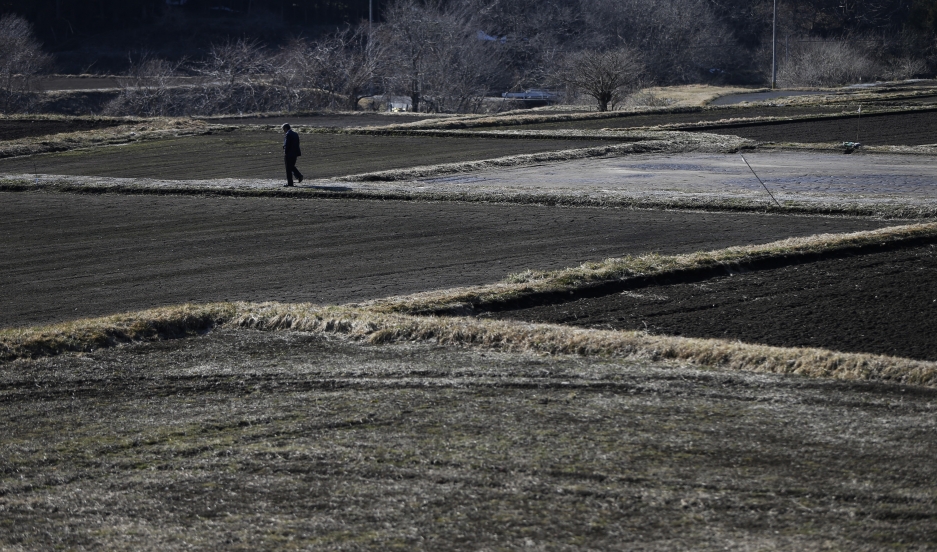 A man walks between a fallow rice field at Miyakoji area in Tamura, Fukushima prefecture on April 1, 2014. The area was finally opened to residents three years after the Fukushima Daiichi nuclear disaster.

It's the radiation counter on the dashboard that distinguishes the Tatsuta-to-Haranomachi route from any other Japanese bus ride.

The new service, which ran for the first time on Saturday, is the first bus route in four years to cut through through Japan's nuclear exclusion zone — the area contaminated in the Fukushima nuclear disaster triggered by the tsunami of 2011. But there are no scheduled stops in the forbidden zone, and drivers are discouraged from stopping for any reason because of radiation levels. Both the towns at the ends of the bus route are outside the polluted zone.

The Daily Telegraph's Julian Dyall was one of those who bought a ticket on the route's first day, joining many former residents of the abandoned towns and villages near the power plant. He tells PRI's The World that the journey was a strange experience.

"Before you go into the exclusion zone, life is largely as normal," he explains. "People go about their everyday business. But then it gets eerie. In many places the radiation is high, in some areas its very high. There are places you really shouldn't linger."

Many of those on the bus wanted a glimpse of their old lives and homes. For some, it's a deeply painful experience. "There was a sense among some people that they wished they hadn't gone [back]," he remembers. "It's all gone. Some of them lost people, lost close friends in the tsunami and the earthquake. It's traumatic, almost, to go back to see these places."

The route has been opened in order to create a sense of normalcy in the polluted areas. But it may still be another 30 years before the most heavily irradiated areas are again fit for human habitation. For many older residents, the closest they will ever get to their old homes again is a longing look through a bus window.