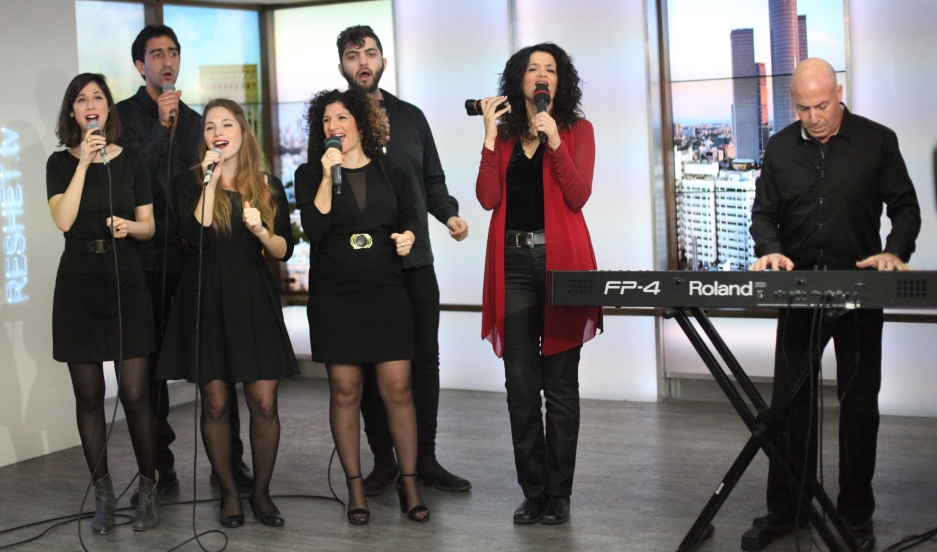 Ofer Portugaly on piano, and his wife Iris (standing next to him), started an Israeli gospel choir in 1999 after a trip to Nigeria. Here, they appear with part of their 15-member ensemble on Israeli TV.

Gospel music, often set in the Holy Land, has an unlikely modern home in Israel as well.

Music teachers Ofer and Iris Portugaly — both Israelis — were inspired by music they heard in churches in Nigeria, so they dedided to launch their own ensemble back home. Ofer and Iris Portugaly, both Jewish, met 27 years ago, when they were students at Berklee College of Music in Boston. They were studying jazz, but the gospel choir used to rehearse in the room next door.

“This was very powerful,” Ofer Portugaly said. “You could see the whole school coming from outside to see it from the window to get the spirit.”

For a while, they stuck to jazz. Ofer played piano and Iris sang and played drums. This changed when they traveled with their band to Nigeria in 1999, and they were inspired to start their own gospel choir.

But gospel music is a strange bird in Israel. For one thing, there’s the very center of the music — Jesus — not a common subject of music among Jewish singers. So Iris and Ofer replaced references to Jesus with God. For their version of, “Oh Happy Day,” which includes the line “when Jesus washed my sins away,” they used a Hebrew translation that means, “when God created the world.”

“The main challenge to create this group in Israel is to stay authentic,” Iris Portugaly said. “ We’re not Christian, we were not born in the church, so we have to believe and find our own authentic way to sing.”

Another challenge to starting an Israeli gospel group proved to be learning the style. The Portugaly’s choir has about 15 members, and many had never heard gospel music before. The choir’s repertoire is a mix of classic Gospel songs translated to Hebrew — like “Oh Happy Day” — along with some original songs and arrangements of Jewish prayer.

Iris Portugaly said adapting Jewish prayer to the gospel style required a special effort. “You really have to insist to see the optimistic part of it,” she said. “We are a culture that in our music you can hear a lot of pain, and we want to focus on the joy and the hope."

Ofer said he noticed this when he rearranged the Jewish prayer “Adon Haslichot,” the Lord of Forgiveness, sung on the annual Day of Atonement. “This is a very dark song. When you hear it in the Jewish temple you really feel the fear of the judgment day,” he said. “I arranged it in a baroque style, like Bach and Handel. It’s like a choiresque kind of thing. Like old gospel.”

Music historian Nissim Calderon said it is not shocking that Israelis would like gospel music. They are big fans of American classic rock, which has its roots in the blues and gospel. Still, just because Israeli gospel is not surprising doesn’t mean it is accepted — especially among observant Jews. The Portugalys have played in synagogues in New York, but not in Israel.

Cantor Shlomo Pivko leads prayers at Tel Aviv’s Great Synagogue. He is a celebrated singer, and said many Jewish congregations have choirs. But they are almost only men. He said he could never accept the Portugaly choir in his sanctuary — especially because they take inspiration from the church.

One place that may be riper for collaboration is a church a few blocks south of the Great Synagogue in the gritty area of Tel Aviv’s Central Bus Station.

Nigerian pastor Jeremiah Dairo holds a weekly prayer service at the Lift Your Head ministry here accompanied by drums, keyboard and guitar. He said he could connect to the Portugalys’ version of “Oh Happy Day.”

“So it’s a happy day, everybody remembers the day they gave their life to Christ,” Dairo said. “But this song, that they are singing in Hebrew, is also a nice song. It’s talking about God. So once God is there, everything is settled.”

Everything may be settled musically, too. Ofer and Iris said they’re open to collaborating.