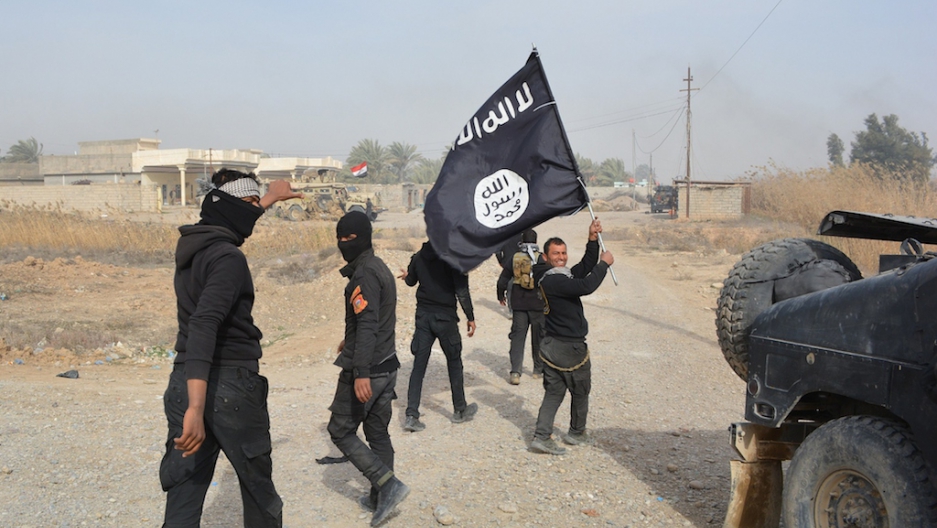 Iraqi government forces celebrate while holding an Islamis Sate (IS) group flag after they claimed they have gained complete control of the Diyala province, northeast of Baghdad, on January 26, 2015 near the town of Muqdadiyah.
Credit: Younis al-Bayati
Share

BEIRUT, Lebanon — The killing of hostage Maaz al-Kassasbeh by the Islamic State was different from others that came before it, but the motivation was the same.

A video released on Tuesday appears to show the Jordanian air force pilot being burned alive in a locked cage by the group’s fighters. The cameraman zooms in to show his last seconds.

There is a reason that al-Kasaesbeh was killed in such a theatrical and sadistic manner.

It’s comforting to tell ourselves, in the face of such brutality, that the Islamic State (IS) is becoming weaker. It also happens to be true.

The US-led anti-IS coalition, of which Jordan is a member, has played a key role in halting the group's advance, and helped various forces on the ground win back lost territory.

Over the past few months, IS has suffered a series of defeats on the battlefields of Iraq and Syria — in Sinjar, Diyala province and, in front of television cameras from around the world, in Kobani.

These defeats, however insignificant they may seem strategically, carry with them a loss of prestige, which has been an invaluable resource for IS in building support and in the recruitment of fighters from abroad.

With some imagination, it is possible to understand why some misguided soul might want to join a burgeoning Islamic State that is powerful, confident and expanding. But as the defeats mount, it becomes harder for IS propagandists to convince others that they are carrying out God’s work.

The nature of al-Kasaesbeh’s killing should be viewed in the context of these defeats — as a form of damage control, an attempt to repair its reputation for strength. The same was true when IS announced it had killed American aid worker Peter Kassig in November.

In this case, it seems the greater the defeat, the stronger the need to reassert itself. The cage, the orange jumpsuit, the masked gunmen standing on raised platforms like props on a film set, the killing by fire and other theatrics show that the Islamic State is having to work harder to instil fear.

Reports suggests that IS killed al-Kasaesbeh a month ago, but held back the video and even entered into negotiations with Jordan in an apparent attempt to release an IS prisoner. That shows that the group thought carefully about how they could use al-Kasaesbeh's death for maximum impact.

This is a group, after all, that profits from the weakness that its savagery provokes in others — fear, anger and the desire for revenge.

It's likely that at least part of the reason why al-Kasaesbeh was apparently killed in such a brutal way was to scare Jordanians into opposing their country’s involvement in the war against IS. Early indications appear to show that it had the opposite effect.

Speaking before his son’s death, Saif al-Kasaesbeh had questioned the wisdom of Jordan’s participation in the war. But reached by Buzzfeed on Wednesday, he said it was his country’s duty “to destroy this terrorist group.” The same sentiment is being expressed by many other Jordanians.

The Islamic State is by no means beaten. And the group's supporters will no doubt celebrate the killing as a powerful strike against the anti-IS coalition.

But it was not too long ago that the world was shocked by the group’s military victories, rather than the attention-grabbing barbarism that we see today.