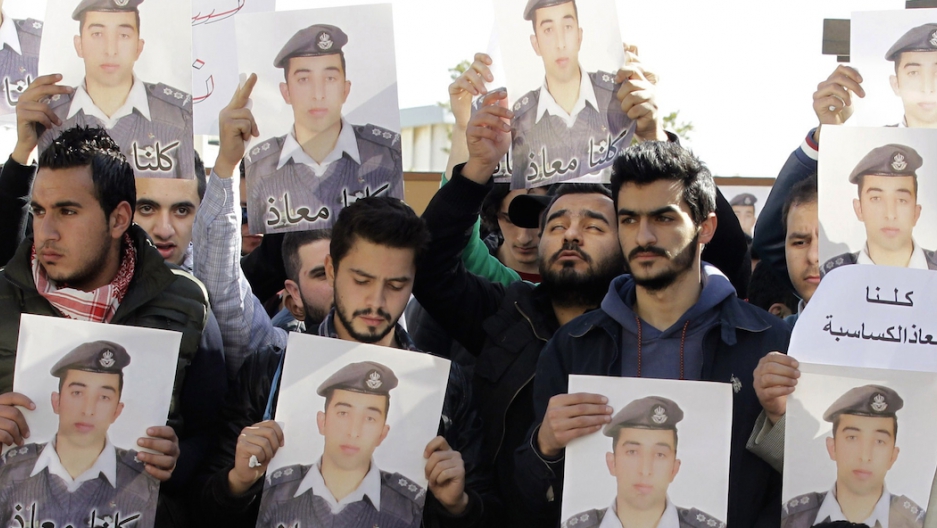 Activists carry posters Tuesday in Amman with a portrait of Jordanian pilot Maaz al-Kassasbeh, who was captured by the Islamic State on Dec. 24 after his F-16 jet crashed while on a mission against the militants over northern Syria.
Credit: Khalil Mazraawi
Share

This live blog is currently closed. Check out our newswires for the latest on this story.

Here's how social media users around the world are remembering Muath al-Kasaesbeh, a pilot who was purportedly burned alive by IS militants.

#كلنا_معاذ (or #WeAreAllMuath) is trending in the Middle East in honor of the young Jordanian pilot who was burned alive by ISIS.

This is how the Jordanian pilot should be remembered. pic.twitter.com/MPX49kegxE

Reuters — Jordan's King Abdullah said on Thursday the killing of pilot Muath al-Kasaesbeh by Islamic State militants was an act of cowardly terror by a group that had nothing to do with Islam.

“This (is) cowardly terror by a criminal group that has no relation to Islam ... It's the duty of all citizens to stand together," he said in a short televised appearance.

The king cut short a visit to Washington after the news of the pilot's death.

Citing anonymous officials, Agence France-Presse and Reuters, are reporting that Jordan plans to execute Sajida al-Rishawi, a failed suicide bomber who was involved in a hotel attack in Amman that claimed at least 55 lives.

Jordan would deliver a "strong, earth-shaking and decisive" response, Reuters quoted a government spokesman as saying in a statement.

This post on Buzzfeed has more details about al-Rishawi as well as the attack.

The Diwan of the family of the Jordanian pilot is packed with people totally shocked and very sad. # jordan pic.twitter.com/TH7jgAo2Ae

Tensions if front of family Diwan of the Jordanian pilot in Amman after his execution by ISIS. #Jordan pic.twitter.com/DjdILL8riR

Reuters — The Jordanian army said on Tuesday it would avenge the death of a Jordanian pilot killed by Islamic State militants. "The revenge will be as big as the calamity that has hit Jordan," army spokesman Colonel Mamdouh al Ameri said in a televised statement, confirming the death of Mouath al-Kasaesbeh, who was captured by the insurgents in December when his plane crashed over Syria.

Reuters — The White House said on Tuesday the US intelligence community was working to authenticate a video purporting to show Islamic State burning a Jordanian pilot hostage alive, and it condemned the militant group.

"The United States strongly condemns ISIL’s actions and we call for the immediate release of all those held captive by ISIL," White House spokeswoman Bernadette Meehan said in a statement, using another acronym for Islamic State.

"We stand in solidarity with the Government of Jordan and the Jordanian people," she said.

News Desk and Agence France-Presse — The Islamic State militant group released a video on Tuesday purportedly showing a Jordanian pilot it had captured in December being burned alive.

The video released online showed images of a man purported to be Maaz al-Kassasbeh engulfed in flames inside a metal cage.

Shortly after the video was released, Jordanian state television said the pilot had been killed a month ago.

The video shows the captured pilot discussing the mission that led to his capture. He is shown in the video wearing an orange jumpsuit and with a bruise under his eye.

Towards the end of the video, al-Kassasbeh is shown in a cage, surrounded by masked gunmen, with what appears to be petrol on his jumpsuit.

Video ends with threat to other Jordanian pilots, showing ID numbers and addresses for them in Jordan. Unclear how they got that info.

The video shows al-Kassasbeh being burned alive, before collapsing.

It is unclear when the killing took place, but one Twitter user apparently based in the IS stronghold of Raqqa reported the group's members discussing al-Kassasbeh killing as early as January 8.

The Raqqa resident, who uses the pseudonym Abu Ibrahim Al-Raqqawi, is an anti-IS activist and has been one of the few sources of information from the city.