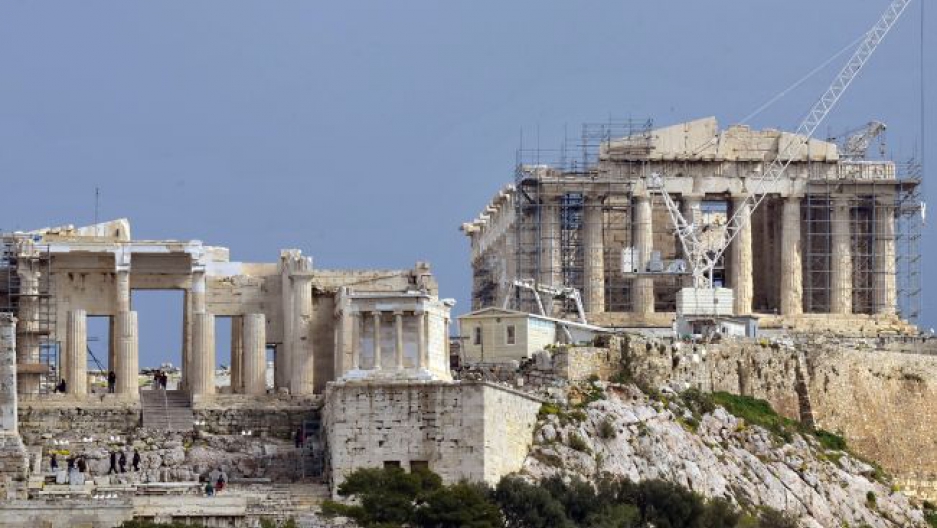 LISBON, Portugal — The electoral earthquake that ushered in a government coalition of far-left and hard-right in Greece has commentators rushing for references from classical mythology:

Yet as Prime Minister Alexis Tsipras set off Monday on a tour to explain his policies to skeptical European partners, it's the sword of Damocles that most comes to mind.

Tsipras is in a race against time.

Optimists estimate Greece may have enough funds to keep going until June, unless Tsipras can strike a deal with the rest of the European Union. Others say it could be broke by March.

If that wasn't bad enough, a vital lifeline from the European Central Bank for the Greek banking system also risks being cut off in March, if there's no deal with creditors.

So Tsipras has a few weeks to avoid the state going bankrupt and a collapse of the banking system.

That's a prospect that could prove wrong those who thought things in Greece could not get any worse.

And it’s raising fresh concerns Greece could be forced out of the euro zone with potentially disastrous consequences for European and world economies.

"The standoff between Greece and the euro zone is the greatest risk to the global economy,” Britain's finance minister George Osborne said Monday in London after talks with his Greek counterpart. “I urge the Greek finance minister to act responsibly."

Greek voters turned to Tsipra's Coalition of the Radical Left (SYRIZA) party in Jan. 25 elections desperate for change after six years of austerity policies demanded by the country's creditors.

During that time, the economy shrank by almost a quarter, while poverty, debt and unemployment rates soared to record highs.

SYRIZA has vowed to turn that around.

More from GlobalPost: Greece: What next?

Tsipras says he doesn't want more loans, but argues Greece's EU partners and other creditors should write off much of the country's 310 billion euro ($362 billion) debt.

If it stops making debt payments, he argues, Greece would have enough revenues to boost the economy through anti-austerity measures like poor relief, hiring more civil servants and raising the minimum wage.

His Finance Minister Yanis Varoufakis last week said Greece will not extend the 240 billion euro ($272 billion) bailout program that’s kept the economy afloat and runs out at the end of this month.

He also said Greece will no longer cooperate with the "troika" of officials from the EU, ECB and International Monetary Fund who have overseen the application of austerity in return for the bailout money — although he'd like the ECB to continue propping up Greek banks.

Such talk has spooked investors and irked EU officials who say Greece must stick to the rules.

German Chancellor Angela Merkel insisted over the weekend there could be no write-off of Greece's debt, which is proportionally the world's second biggest after Japan.

She added that further EU "solidarity" with Greece was dependent on the government continuing to "carry out reforms and cost-saving measures."

Tsipras headed on a tour to Paris, Rome and Brussels this week to seek support for his plans. Pointedly, Berlin and a meeting with Merkel, the chief architect of austerity, were not on his agenda.

Merkel and Tsipras, like other European leaders, are adamant that they want to avoid Greece leaving the euro. But the pair agrees on little else and it’s unclear how far they are prepared to compromise to avoid a potentially catastrophic “Grexit.”

Some European officials are concerned making concessions to SYRIZA would encourage voters in other countries hard hit by the euro zone debt crisis to seek similar solutions outside the political mainstream.

Spain has been getting most attention due to a surge in support for the leftist Podemos (We Can) party, which claimed 400,000 flocked to its anti-austerity rally in Madrid on Saturday. But in Ireland, Portugal, Italy and France, other populists on the left and right are hoping to capitalize on SYRIZA's success.

"I hope the Greek government will respect the rules of the single currency, of the European Union," he told reporters Sunday. "On the day that we don't respect our own rules, we can't live in the same shared house."

Others fear a Grexit would erode the foundations of the euro zone, forcing out other peripheral countries — with Portugal and Spain next in line, despite recent signs of recovery there and EU firewall measures to contain a crisis in one country.

"If the possibility of Greece leaving the euro is increasing, the contagion would eventually reach Spain," economist Jose Carlos Diez wrote Saturday in El Pais newspaper, blasting politicians who have downplayed the impact of Grexit.

"We share a currency and monetary contagion would easily spread," he added. "The irresponsibility of our politicians has reached unthinkable levels."

With stakes so high, there are hopes both sides will narrow the gap. Tsipras sounded conciliatory as he began his European mini-tour.

"We are in substantial negotiations with our partners in Europe and those that have lent to us. We have obligations towards them," he told reporters Monday in Cyprus.

He denied Greece might turn to Russia as an alternative source of financing, a nightmare prospect for the EU, raised by SYRIZA's cozy relations with President Vladimir Putin's regime in Moscow.

More from GlobalPost: How the Greek election played in Moscow

EU officials have also pointed to possible compromises, by making creditor supervision of the Greek economy less intrusive than the work of the widely resented troika or granting Athens more time to repay its debt.

Tsipras also got some support from US President Barrack Obama who urged compromise and took a shot at Europe's German-mandated austerity.

“You cannot keep on squeezing countries that are in the midst of depression,” Obama told CNN on Sunday. “At some point, there has to be a growth strategy in order to pay off their debts and eliminate some of their deficits.”

However, there is a huge gap between the positions of Greece and euro zone partners led by Germany.

Merkel has repeatedly shown her determination to stick to her guns throughout six-years of euro zone crisis. Tsipras will find it hard to back down on key electoral promises.

While they face each other down, the clock is ticking for Greek finances.