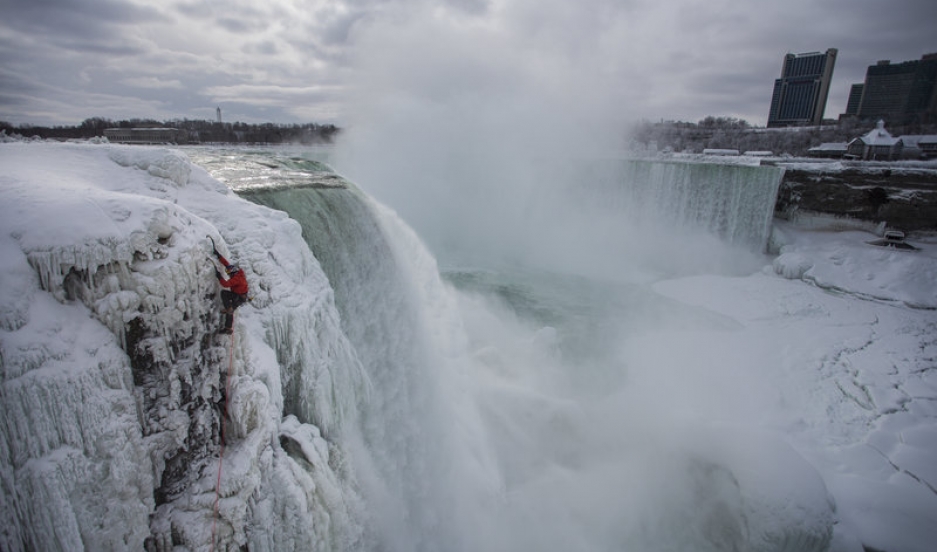 Yes, ice climbing up Niagara Falls does look crazy, but that’s exactly what Canadian adventurer Will Gadd did last Tuesday.

Gadd, from Canmore, Alberta, is the first person to climb a wall of ice at the edge of Niagara's Horseshoe Falls. He was followed up the falls by his climbing companion, Sarah Hueniken.

Gadd and Hueniken made the 150-foot ascent along a 30-foot-wide strip of ice that formed along the left edge of the iconic waterfall.

“It’s a cool, cool piece of real estate out there and as an ice climber it’s the largest, wildest thing I could think of climbing," Gadd says. "It’s never been climbed, so I’m really happy to have had the opportunity to stick an ice tool into it.”

Gadd got permission for his climb from the US Parks Service after convincing them he would be able to safely make it to the top. But even with all of the safety precautions, Gadd says the spray ice wasn’t entirely frozen.

“The whole of Niagara Falls is ripping over my right shoulder, and it did hit me that this was a moment in life I’m certainly never going to get to experience again,” Gadd says. “It’s so wild in there and violent. The sound of the falls is just crashing, and I thought ‘Yeah, this is really cool.'”

But Gadd still has adventures to check off his bucket list.

"What I’m really focused on right now is visiting places that won’t be there in as little as a couple of years," he says. "I just returned from climbing ice on top of Kilimanjaro, and what were once massive glaciers on top of Kilimanjaro are now just thin slivers, really like icebergs in a desert up there. So I’m going to go around the world and document these places.”