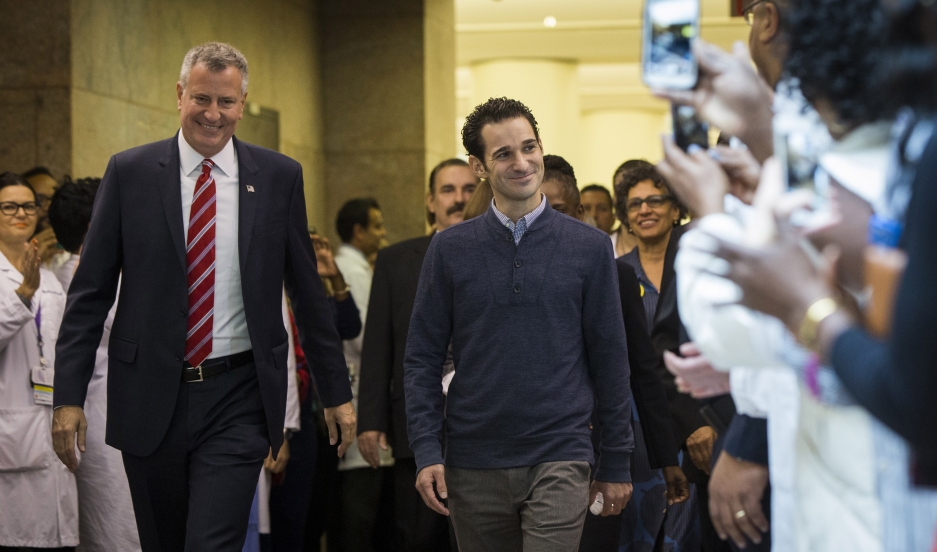 New York Mayor Bill de Blasio walks with Dr. Craig Spencer, at right, as he is discharged from Bellevue Hospital after being declared free of the Ebola virus on November 11, 2014.

Dr. Craig Spencer returned to New York last fall from a five-week medical mission to West Africa, where he worked to treat patients diagnosed with Ebola.

After he got home, Spencer monitored his health, checked his temperature daily and went about his regular life, riding the subway and spending a night out at a bowling alley.

Then, in mid-October, everything changed.

“When I woke up that morning, I didn't feel quite right," said 33-year-old Spencer to WNYC's senior health producer, Mary Harris, in an exclusive interview. "I was breathing a little faster and I felt a little warm, and I suspected that maybe I wasn't okay."

Spencer reported a fever of 100.3 and was taken to Bellevue Hospital. He would soon be diagnosed with Ebola.

"In a way, for that one brief second, it was almost a sigh of relief because the moment I’d been fearing and concerned about had arrived," Spencer said. "I felt not at peace with being infected, but like I could almost stop worrying about getting it."

But Spencer quickly became a punching bag for many media outlets and politicians, who accused him of irresponsible behavior and condemned his decision to go out in public after he returned home. The governors of New York and New Jersey instituted mandatory quarantines for aid workers returning from West Africa and called for better screening at airports, igniting another round of controversy over the need for such policies.

“People thought that I should be — I forget what the exact tweet was — [but they thought I should] be tried for manslaughter,” Spencer said. “To this day, I haven't seen anything in the media that has been entirely factual — everything I have seen has been partly wrong or completely wrong.”

Spencer believes a lot of the backlash he received came as a result of sheer panic, something akin to the era of the AIDS epidemic.

“A lot of people forget that, in the ‘80s, Americans actually considered the idea of tattooing AIDS patients,” Harris said. “There’s a New York Times poll from 1987 that found that 29 percent of Americans thought this was a good idea. That was very similar to what happened here. People wanted to know where the threat was ... But was the threat really there at all? Probably not.”

The quarantine put in place by the governors of New York and New Jersey set a dangerous precedent, according to Spencer.

“We said 'We trust you as a public health professional, as a doctor, as a nurse — as someone who is well enough trained to go and fight this disease at its source — but we don't trust you enough to take care of yourself and those around you when you get back,'” Spencer said.

But he does feels an immense amount of guilt in the aftermath of his diagnosis and recovery — not just for the policy changes it inspired, but for those it didn’t.

“It revealed a lot of weaknesses in a few different areas,” Spencer said. “One, how the media responded, and at how, at a time when they were responsible for informing the public that this was not the next pandemic — we were at almost no risk — at a time when they were responsible for doing so, they didn't step up and do that. Another concern of mine is that we have set a poor precedent for public health threats, not only in West Africa, where we were extremely poor to respond, but we responded very poorly in many respects to this threat here in our own country.”

This story is based on an interview from PRI's The Takeaway, a public radio program that invites you to be part of the American conversation. You can listen to Harris’ extended interview with Craig Spencer below.