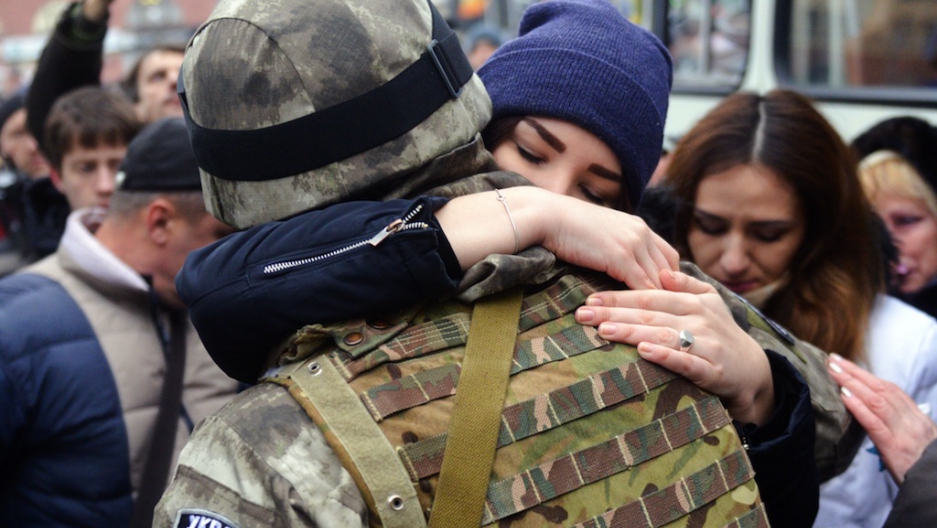 A Ukrainian policeman embraces a woman during a ceremony in Kharkiv, northeastern Ukrainian, on Jan. 30, 2015, before his deployment to the east of the country.
Credit: Sergey Bobok
Share

KYIV, Ukraine — Ruslan Kotsaba is someone you’d typically consider a Ukrainian patriot: a journalist in the country’s nationalist-oriented west, he’s participated in pro-democracy protests and regularly rails against official corruption.

So it may seem strange that earlier this month he slammed his country’s war effort against Russian-backed separatists.

“I denounce mobilization [for war],” Kotsaba said in a video posted to YouTube on Jan. 17. “I call on all reasonable adequate people to denounce this mobilization, because this hell, this horror, must be stopped.”

With Ukraine mired in a messy war in the east, authorities here have launched a new wave of conscription aimed at beefing up their fighting forces.

But that may get tougher to do as the war grinds on.

Whether out of frustration with the country’s leaders and their handling of the war — or simply out of a growing fatigue with the nine-month-long conflict — some Ukrainians are turning away from the draft, which was reinstated last year as the crisis in eastern Ukraine deepened.

A presidential adviser even claimed earlier this week that about 37 percent of those called up in one western region, traditionally known for its nationalist convictions, had reportedly fled abroad. In a separate nearby region, almost one in five of those drafted reportedly claimed religious exemptions.

More from GlobalPost: Mysterious bombs are exploding in Ukraine — and not in the war-torn east

The trend is likely part of what some sociologists say is a pronounced fear among ordinary Ukrainians that the conflict will intensify, just as it has in recent weeks. More than 5,000 people have been killed, while a September ceasefire has deteriorated into all-out war with no end in sight.

Many are also preoccupied with the dire economic situation.

“More than 90 percent of the population has felt the effects of the economic crisis,” said Yevgeny Kopatko, head of the Research and Branding Group, a pollster in Kyiv. “Society lives with a high level of anxiety.”

Officials are trying to allay fears that widespread draft-dodging is happening — indeed, many regions have reported no such problems. So far, the current wave of mobilization has called up more than 75,000 men, about 60 percent of whom will enter service, President Petro Poroshenko said this week.

Ukrainian men ages 25-60 are eligible for conscription. Preference is given to those with military experience and with particular specializations, such as tank training.

But authorities have also sought to crack down on attempts to avoid conscription. On Friday, Poroshenko issued a decree that includes a provision aimed at regulating foreign travel for those subject to mobilization.

The military has also created a database to keep track of offenders, who face two to five years in prison if found guilty of dodging the draft.

But that punishment apparently fails to deter men like Kotsaba, who as a journalist has reported on the conflict from either side of the line and who, since his video address, has attracted jeers and widespread condemnation as a “traitor.”

Though the Security Service of Ukraine (SBU) even threatened to launch a criminal case against him, Kotsaba remains outspoken.

In an interview with GlobalPost, Kotsaba said he objects to fighting in a “civil war,” a hotly disputed term given the amount of Russian support the separatist rebels receive. But his main complaint is that the conflict — officially dubbed an “anti-terrorist operation” — hasn’t been honestly portrayed by the government.

Authorities here have still not formally declared a state of war, despite their regular allegations of Russian military incursions into eastern Ukraine. Critics like Kotsaba say that’s a loophole that provides Poroshenko, whose confectionary company still operates a factory in Russia, more diplomatic wiggle room.

“The point is in the principle: When war is declared, then we don’t trade with Russia, we cut off diplomatic ties, the president removes any business assets he has in Russia,” he said.

Kotsaba is not alone. Some Ukrainian rights activists have also taken issue with the legal ambiguity of the conflict, arguing that in absence of a clear state of war, conscripts can legally challenge the draft. Others say mobilization is legally applicable in any instances of “armed aggression,” not only when martial law — or a state of war — is formally declared.

Then there’s Russia, which most observers agree has waged a fierce information campaign aimed at tarnishing both the Kyiv government and its anti-separatist campaign in the east.

A curious paradox: While more than 70 percent of the population wants peaceful resolution to the conflict, more than 60 percent also believe it’s necessary to keep fighting.

The Kremlin’s powerful propaganda machine has reported widely on Ukraine’s mobilization in recent days but has regularly dramatized its severity, with reports claiming that conscripts are “desperately trying to evade military service.”

Even Russian President Vladimir Putin voiced his support for draft dodgers. Last week, he proposed a law that would allow military-age Ukrainians to stay in Russia longer, also claiming that “many” Ukrainians are avoiding the draft.

“And they’re doing the right thing, because they’re just pushed out there like cannon fodder, under the bullets,” he said.

Kotsaba himself has come under fire for allegedly playing into the Kremlin's hands — a charge he denies — after giving numerous interviews to the Russian media about his video address and criticism of the war.

Oleksiy Melnyk, a defense analyst at the Razumkov Center think tank in Kyiv, says the draft is a “complicated picture” that’s been exploited for effect by Russian media.

“We shouldn’t rule out that this issue has been targeted by the Russian [side of the] information war, using different channels, sources and techniques,” he said.

Kopatko, the sociologist, agrees the issue is complex and points to a curious paradox: While more than 70 percent of the population wants a peaceful resolution to the conflict, more than 60 percent also believe it’s necessary to keep fighting, according to Research and Branding Group data.

“Social consciousness has gone through a sort of militarization,” Kopatko said. “People are living in another dimension, they look at things differently now.”