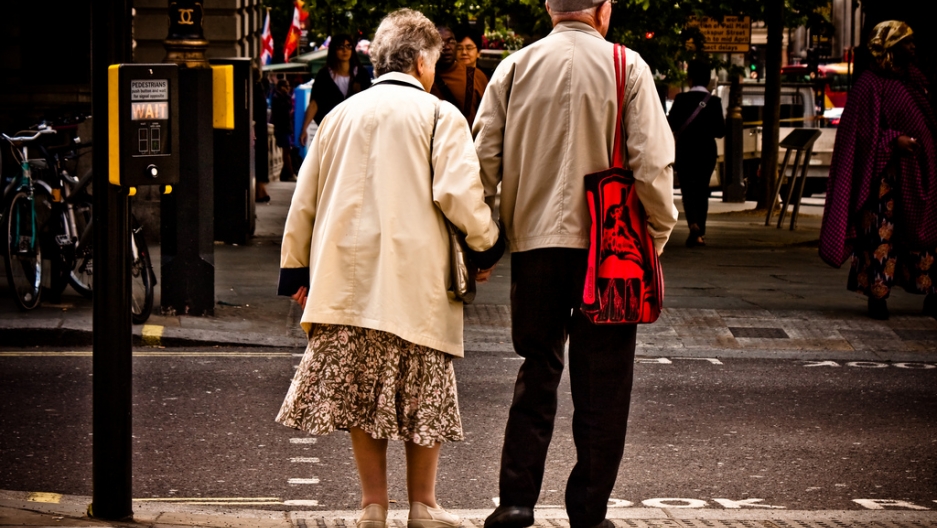 An elderly couple holds hands while waiting to cross a London street.

In my studies of over 700 long-married people, I uncovered hundreds of pieces of advice, from specific tips to big-picture suggestions.

So I had to think when asked to consider the question: "What’s one thing older women would like younger women to know about love and marriage?"

After pondering the data, a particular point stood out that the women in my sample (ranging in age from 63 to 108) wanted to pass on to those embarking on the relationship journey. When it comes to choosing a mate, I heard again and again: Choose carefully.

Looking back over their long experience, they believe some women are not careful enough. In their view, they tend to do one of three risky and possibly disastrous things:First, they can fall passionately in love and commit immediately, Romeo and Juliet style; second, they can, especially as they reach their 30s, commit out of desperation, for fear that no one better will come along; third, they can drift or fall into marriage without the choice or its reasons ever becoming clear to themselves or others.

The elders reject these ways of thinking.

Whether it is an impulsive move, a perceived last-chance leap or a slide into the inevitable, their advice is to stop, look, and listen — to yourself and others. Question the decision, then question it again. Some strong testimony for the need to wait and choose carefully came from women who experienced failed marriages (sometimes getting it right in a second union). They typically attributed the failure to entering marriage on impulse and not gaining a deep knowledge of their partner before marrying. As 81-year-old Marie said bluntly, “it is better to not marry than to marry the wrong person. Both my husband and I were married once before, and it took that experience to learn this lesson."

Virginia, 73, described rushing into marriage as one of the biggest mistakes anyone can make. "I got married to get away from home," she said. "So there was this fellow I’d been going with, and we up and got married the week I turned 18. Well, two children and 11 years later, we divorced. It wasn’t a wise decision to marry him but it was an out for me at that time. So please, tell younger people: When it comes to marriage, don’t rush into things.

"Give it time before you jump in. I could have made a major difference in my life if I had chosen my husband carefully, really gotten to know him before committing to the relationships. Know the person in and out before you get married. You think nowadays that you can get out of it easily, but that’s not always the case."

Many women attributed their success to careful mate selection. Lillie, 78, was married for 22 years and divorced for the past 35. Having walked the walk, she linked choosing carefully to the futility of expecting to change your husband.

"The biggest mistake is being too quick to enter a marriage," she said. "Get to know that person very, very well in all circumstances, the happiness part and the stressful parts. So both people have to be very willing and very open, and often times make concessions, as they get to know each other. So please, take a very serious look. You cannot mold your spouse into something that you want.''

Given the paramount importance of choosing carefully, it’s a good thing that these older women had specific advice for their younger counterparts. They offered the following strategies to help make the right choice:

The elders suggest you think about whether your future spouse will be a “good provider.” It’s an old-fashioned term, but it embodies a fundamental truth: marriage may be about love, but it’s also an economic arrangement that unites the financial futures of the partners. So women (and men, too) need to ask: Does my prospective mate like to work? Will he or she hold up their end financially? And can they responsibly handle money? The elders told story after story of having to carry the economic load and handle someone else’s debts and bad financial decisions.

You don't need to make the choice entirely on your own, older women say. Listen to your friends and family: Do they like your partner? Do they think you're being treated well? Do they think your partner is serious about the relationship? I heard from elders who made a wrong choice: “If only I’d listened when people told me this was a bad decision.”

Write down an actual list of what you need out of a relationship and whether those needs are being met. Rowena, 69, found the list helped her. "When I met Graham and decided to get involved with him, I sat down with a piece of paper and I wrote pros and cons. I was in my 30s at that point, and I said 'Hmm, you know, this is what I want.' And this guy had those qualities — many more good ones than bad ones.

"By that time in my life, I was awake to what I needed. And really sitting there with a piece of paper did it. It may sound cold-blooded, but I made a list of what I and what he could bring to the situation. At this point I had a little boy and what he needed was very important to me — and it turned out very well."

4. Do your life goals align?

The elders say that women should make sure — before committing — that their partner’s goals for a good life together align with theirs. Unfortunately, such discussions are sometimes not explicit and detailed. They suggest serious discussions about one another’s goals and aspirations for work and career, for how expensive a lifestyle you wish to live, and particularly important — children. Nadine, 65, pointed out that women may assume their partner wants kids. "In fact, a couple may disagree substantially on this issue,'' she said. "In my job, I sometimes counsel young people and a lot of times they say: 'Oh well, we’ll just bracket that question for now.'

"But sometimes people actually have pretty strong feelings about whether they will or won’t have children. And one person can say, 'I really want children.' The other one says, 'Well, I’m not sure' and they let it go. But sometimes that really means no. And I have seen heartache there as a result. So they should ask: 'Well, what can you imagine your life might be like in 10 years? Does it involve children?'

Of course, both this general advice and the specific tips apply to men as well as women. But many older women in the study emphasized “choose very carefully” as a lesson — and one they wished to pass on to younger women wondering the big question: Should I stay or should I go?