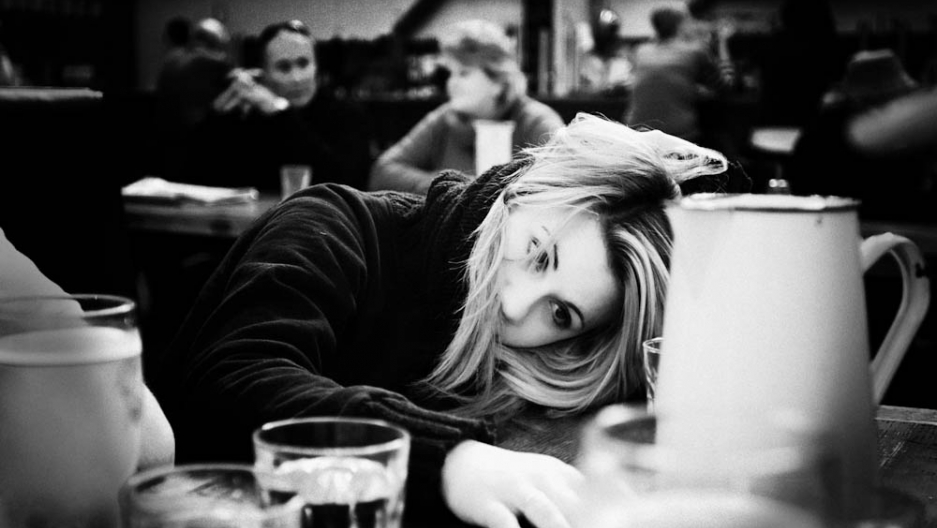 What's happening in this bored young woman's brain? Scientists aren't totally sure, but suspect that it is mostly beneficial

When Manoush Zomorodi was eight years old, she walked around her house gathering up all the houseplants. She arranged them in rows, gave them all name tags and then performed a concert for their benefit. Why? Because she was bored.

And now? “I suddenly realized I haven't really been bored in about seven years,” Zomorodi says. “That was when I first got a smartphone.”

That realization prompted Zomorodi, the host of WNYC's New Tech City podcast, to undertake a project called "Bored and Brilliant" that's designed to explore the intersection of boredom and creativity.

Ironically, the project Zomorodi created involves an app — “because nothing these days doesn't, right?” she says. The app, called Moment, not only measures how much time you spend on your phone, it also logs how many times you pick it up "just to check it."

Zomorodi is creating a set of challenges for her listeners to follow during the first week of February, a different one each day. “For example, the very first day is called ‘Put it in your pocket,'" she says. "When you are in transit, you are not to look at your phone. Your phone is not going to be there."

And that's just the start, she says: “As we go through the week, we're going to start giving them assignments to help them be creative in some way. We're going to ask them to get bored and then complete an assignment.”

The project is based on conversations Zomorodi had with scientists who are examining the issue of boredom and creativity. While science hasn't proven that looking at smartphones inhibits our creativity, there is research suggesting that unstimulated, unengaged states of mind can prompt more creative, divergent thinking.

Along the way, Zomorodi discovered the term "default mode,” first coined by Marcus Raichle in 2001 to describe a network in the brain that gets activated when we are bored. Scientists can now watch this happening using fMRI scans, proving that the brain really isn't idle when we think it is.

She spoke with Jonny Smallwood, a neuroscientist in the United Kingdom who studies "mind wandering." He saw the same kind of "default mode" activity in the brain when he asked test subjects to lie in a scanner and just look at a fixed point.

When they did so, the brain exhibited “very organized spontaneous activity,” Smallwood says. “When you're given nothing to do, it certainly seems that your thoughts don't stop. You continue to generate thought even when there's nothing for you to do with the thoughts."

Then Zomorodi came upon another term — “positive, constructive daydreaming,” coined by renowned psychologist Jerome L. Singer to describe the state of mind that occurs when your brain gets bored.

"You start to do things like problem solve and have original thinking and do ‘autobiographical planning,’ where you make sense of all the things that are happening to you in your life and you set your goals and you figure out ways of getting to those goals,” Zomorodi says.

This is precisely the kind of thinking many scientists and psychologists say leads to creative ideas, intuitive insights and “a-ha” moments — the kind of thinking that may become a thing of the past if we all continually turn to our smartphones the moment we feel boredom setting in.

Zomorodi, the mother of two small children, says she worries about this immensely. “I have a seven-year-old and a four-year-old who, the minute they get a sense of feeling bored, want my phone. I'm ashamed to say I very often hand it over,” she confesses. She says she can’t imagine her kids doing what she did with the family houseplants.

But Zomorodi found a different perspective on this issue from an unlikely source: Buddhist monks. Alex Pang, the author of a book called "The Distraction Addiction," talked to monks who are active on the Internet and social media.

"What they always came back with was, ‘All right. Why is it that you think that technologies are any more distracting than your own mind or anything else in the world?’” Pang told her. “Distraction, they said, is an internal problem. Distraction comes from within. It comes from craving. It comes from all the various other ailments that Buddhism seeks to address.”

Not sure what that means? You can look it up on your phone the next time you're waiting for a train. Or you can participate in Bored and Brilliant and see for yourself what happens if you put your phone away and just let your mind wander.