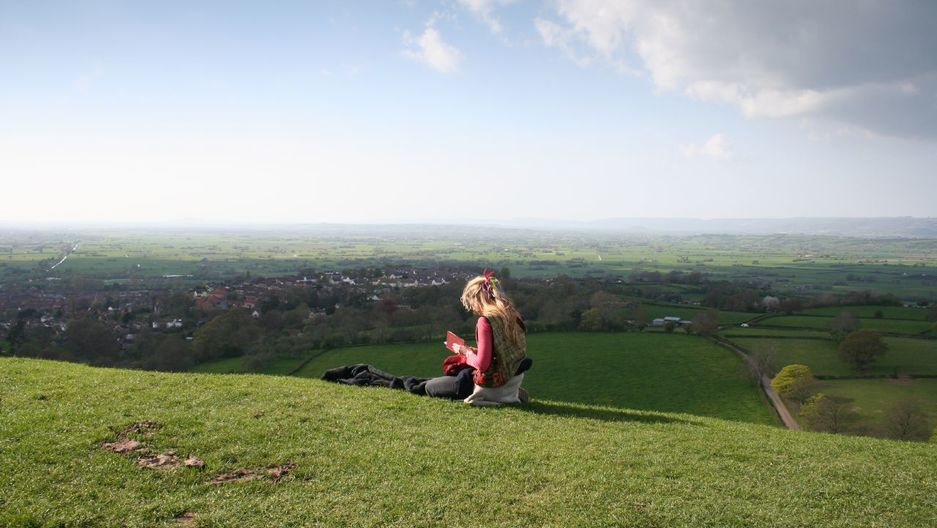 A girl reads on a hill in Glastonbury, England.

Environmental debates are full of facts, figures and studies, but novelist and environmental activist Margaret Atwood says fiction can lend a unique power to those arguments.

“A novel is the next best thing to being there, say neurologists who study brain activity,” Atwood says. “It's even more immersive than, for instance, a television show or film, because the brain has to do a lot of inventing while you are reading: you are supplying the sets, the costumes, the soundtrack and a lot of the interpretation. You’re a participant in any novel that you're reading.”

Atwood’s novel, "MaddAddam," the final book in her Oryx and Crake trilogy, won the inaugural Orion Book Award for fiction in 2014. Orion Magazine, which gives an award to the best environmental book of the year, added a fiction prize last year and the first one went to Atwood.

"MaddAddam" chronicles the survivors of a global pandemic as they try to rebuild a society with the help of some genetically-engineered companions. Atwood says the book was inspired by a trip she took to Australia with a group of birdwatchers who were often discussing extinction. But it also grew out of a lifetime of experience.

“I grew up with biologists and I've been hearing these kinds of speculations for a very long time now,” she explains. “’How long have we got? Are we, as a species, dooming ourselves to extinction? How do we have to think and feel to change course?’”

In the trilogy, a genetic engineer named Dr. Crake creates a bioengineered species of humans called Crakers. Crake is looking for ways to solve “the mega-problem that we as a species are facing, which is that we are extremely numerous and we’re using up more than we’re replacing,” Atwood says.

“The Crakers don't need agriculture of any kind, because they don't need clothing,” she explains. “Not only are they vegetarian, they can eat leaves and grass, like rabbits —but unlike us. They don't have to have farms or gardens — they can just munch away on trees.”

“They've got built-in sunblock and built-in insect repellent. They’re nonviolent. They wouldn't be able to understand the concept of a war. They just wouldn't understand why people would be doing that,” Atwood says. “But maybe best of all, they will never suffer from romantic rejection because, unlike ourselves, but like a lot of other mammals, they mate seasonally. And just to be more than helpful, when they're in season parts of them turn blue, so there's never any confusion.”

One of the biggest jokes in the book is that the Crakers eat kudzu. “Well, somebody’s got to do it — it’s taking over,” Atwood exclaims.

Crake hopes that by rebooting the human race, as it were, he can give humanity a new lease on life. Unfortunately, he has to eliminate the existing species as much as he can, because humans, who are aggressive by nature, “would make pretty short work of these new people,” Atwood ways.

The Crakers, even as we watch them, are learning about things like pictures and stories. “As it turns out, they can't get enough of them, especially stories about themselves. Does that remind you of anybody you might know?” Atwood says.

Crake also can’t eliminate interest in pictures and stories, because they are such a fundamental part of human nature. “If you look at children before the age of four or five, there are a number of things that they just pick up very, very readily. One of them is language; one of them is music; but another one, which kicks in very early, is the ability to understand and then tell narrative sequences of events — in other words, stories," Atwood says.

“We learn through stories way, way faster and deeper than we learn, for instance, through graphs and strings of numbers," Atwood says. "[Novels] are an in-depth experience, and for that reason can be very, very effective if you want to put a person into a situation that you wish to have them imagine.”