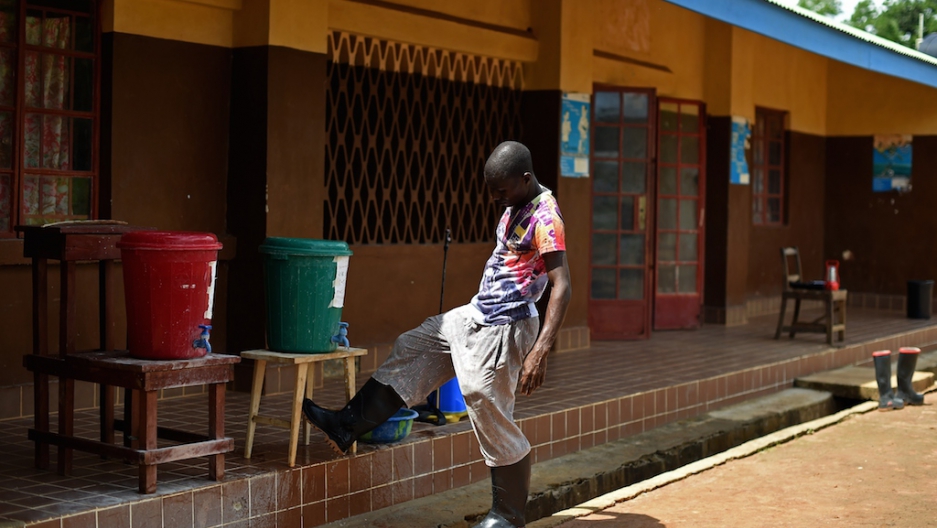 A health center worker in Lokomasama washes his boots, on November 8, 2014, near Port Loko in Sierra Leone. The biggest chiefdom in Port Loko province has 160,000 people and has been severally hit by the Ebola.
Credit: FRANCISCO LEONG
Share

NEW YORK — While the Ebola epidemic seems to have died down in the American and international news media, it continues to rage in countries like Sierra Leone.

The epidemic captured the attention of the world for its fierce contagion and merciless taking of lives, as well as its capacity for crossing borders and threatening people normally safe from such a dreaded disease.

Americans are turning their attention to other issues now, feeling that the threat to them has abated. Elsewhere, medical efforts are scrambling to catch up with the rapid spread of Ebola in West Africa. The attention placed on saving the sick is well justified. Yet this epidemic has a more fundamental and age-old message of public health to teach the world.

A few months ago, a picture on the front page of The New York Times showed two small children lying on the floor, surrounded by fluid, likely vomit and diarrhea, too weak even to raise their heads.

Ebola has a brilliant trick. It causes the body to expel body fluids that then can reach and infect other victims. This is not new; many infectious microbes kill people when vomit and diarrhea are passed from person to person, especially children under 5. Yet such diseases are extremely rare in the United States or in other developed countries for one critical reason: the body fluids we expel are quickly and safely removed from us by water and sewer pipes.

Running water and flushing toilets are such basic elements of life here that we tend to take them for granted. In poor countries, outdoor toilets are common, meaning there is no running water for hand washing.

These are not poor choices; they are realities of extreme poverty.

For the ill and weak, not having indoor plumbing means fluids are discharged in the living space, around family, and can contain billions of viruses.

Sierra Leone is one of the poorest places on earth, and it is no mistake that the Ebola epidemic continues to soar out of control there because of the inhumane living conditions and lack of sanitation.

According to World Health Organization data from 2008, 97 percent of the urban population in Sierra Leone lives in slums, defined as “a group of individuals living under the same roof lacking one or more of the following conditions: Access to improved water, access to improved sanitation, durability of housing.”

The UN has listed basic sanitation as a Millennium Development Goal, and states that sub-Saharan Africa and southern Asia are the parts of the world with the poorest access to sanitation and the highest rates of open toilets.

The Ebola virus has spread exponentially because of how people live in desperately poor regions of the world. For a brief couple of weeks, we in developed countries felt fear that a highly contagious disease could reach us.

People in such impoverished places feel this every day. Our fear should catalyze a revolutionary fervor among people and leaders of all countries to bring living conditions out of the Middle Ages and into the modern era of sanitation.

Without this fundamental step, diseases like Ebola will take hold, flourish and overwhelm medical resources. During the last few months, the United States has educated itself on how this disease spreads, yet the chance that any of us will come in contact with contaminated bodily fluids is small.

If we can harness this energy toward solving the source of such outbreaks — the lack of basic sanitation and safe living conditions — we can restore human dignity and prevent such humanitarian disasters in the future.

Dr. Maria H. de Miguel of Columbia University Medical Center has lived in rural Dominican Republic and Malawi, where she has observed firsthand the effects of living without sanitation.