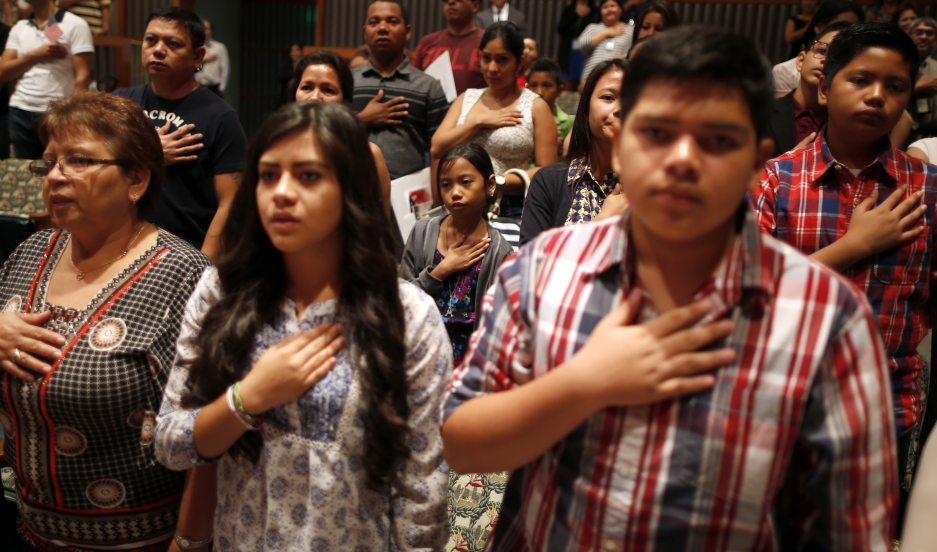 People say the pledge of allegiance at a US citizenship ceremony for 80 immigrant children and youths in Los Angeles.

Arizona has become the first state to make all high school students pass a citizenship exam in order to graduate.

Under the new law, students will take the same test given to prospective citizens by US Citizenship and Immigration Services, and will need to get at least 60 out of 100 questions correct to earn their high school diploma.

Today, the naturalization test is only administered to new immigrants as a prerequisite to American citizenship. But advocates of the Civics Education Initiative, which is promoting the use of the exam, say it's a good way to evaluate students' knowledge of American history and government.

“[The exam] ensures a minimal level of teaching and learning in the most essential subject in our high schools, and that’s basic civics education,” says Joe Riggs, a former congressman who's now the president of the Joe Foss Institute, a non-profit group based in Arizona that advocates for greater civics education.

“The most important mission of our high schools is to prepare young people graduating from high school ... to be active, engaged citizens in our participatory democracy," Riggs argues. “There are basic facts about American civics, our unique history and heritage as a country. These are rights, freedoms and responsibilities of citizenship that all Americans — whether they’re new immigrants or high school students — should know."

Many argue this information is already covered in history classes, but Riggs' goal is to have every state adopt the Civics Education Initiative by Constitution Day 2017, which is September 17. The group says 18 states are currently considering bills to mandate the citizenship exam in high schools.

And while some are wary of this new initiative — Arizona is well-know for its hard line on immigration issues — at least one high school history teacher is on board.

“When the students graduate, they’ll come out and be better citizens,” says Justin Price, a teacher in Maricopa County, Arizona. “This last semester, as I taught government, we looked at voter turnout and what I call voter apathy, which is at an all time high ... I’m really hoping that by putting the emphasis on this exam, students will come out of high school more ready to perform their civic duty.”

This story is based on an interview from PRI's The Takeaway, which wants to know how you would do on the test. We took the questions from the real US citizenship exam and created a quiz. Test your knowledge below.