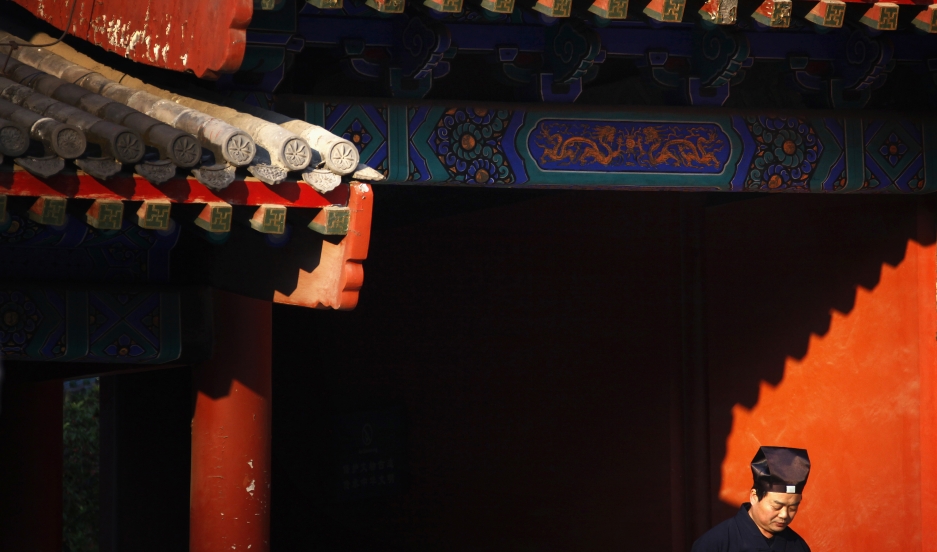 A Taoist priest stands in sunlight to keep warm in the courtyard of the 700-year-old Dongyue Temple in central Beijing.

The officially atheistic People’s Republic of China has five official religions. Buddhism, Islam, Protestantism, Catholicism and Daoism. In one sense, Daoism — it also gets translated into Taoism — might be the most prevalent religious practice in modern China, a half-century after it was nearly stamped out under Mao's Cultural Revolution. But Daoism is also hard to really put your finger on. And that’s because the 2,500-year-old traditions are closely wrapped up with Chinese folk religion. To get a short assessment on Daoism’s place in China today, I spoke with Ian Johnson. He’s a Pulitzer prize-winning journalist based in Beijing who’s written a lot about religion in the People’s Republic.

Q. How much is Daoism thriving in modern China?

Of the five main religions, Daoism is probably the weakest in terms of organization and members and places of worship. There are long historical reasons for that, which are somewhat complicated. But I think Daoism’s importance is more that it underlies a lot of cultural practices that have a spiritual or religious meaning to people. For example, meditation practices, the way people build homes, feng shui and things like that. Those all stem from Daoism. So it has importance in Chinese culture that probably goes beyond its relatively weak position [compared to the other four main religions in China].

Q It’s hard to say with any certainty how many Daoists there are in China, right?

That’s right. I think there is an overall problem in asking that question. Most Chinese have never defined themselves as a member of a religion. That’s really a Judeo-Christian-Muslim, the Abrahamic faiths, define themselves in a way that says, “you are this, and you are not this.” Whereas in traditional Chinese religions, which is true in other cultures as well, people define themselves more as a member of a village, and everyone from that area went to certain temples or engaged in certain practices. But people would never formally say, “I’m a Daoist.” Or, “I’m a Buddhist.” Now, that’s changed somewhat over the last 100 years. But you’ll still find a lot of people are reticent to say that. If you ask someone, “Are you a Daoist?,” they might think you’re asking if they’re a Daoist priest or a member of a temple and they would just say, “No.” So, when these opinion surveys are conducted, it often shows that negligible numbers of people are Daoists. But that doesn’t really reflect the reality.

Q: What do you think Chinese people make of the West’s fascination with Daoist ideas, such as the Dao De Jing by Lao Zi, or the practices qigong and tai chi, for example?

They probably don’t understand it, or they find it a bit odd. But I think it’s been very helpful to the religion here because it legitimizes it. People can say, “Look it can’t be that crazy, even these foreigners from advanced Western countries find something of value in it.” In the Daoist associations in China, you often see foreign scholars who are very highly valued for coming here. Their works are translated, for example.

One other thing I wanted to add about the relevance of Daoism today. The government of President Xi Jinping has been promoting traditional Chinese culture and religions. And you see that he has officially, sort of, endorsed Confucianism and has said nice things about Buddhism, and Daoism also as a traditional Chinese religion is more favored. More money is flowing to temples. It’s easier to get permits to build. It’s really on the upswing in China. There’s something else going too. A lot of people, especially after 35 years of growing prosperity, are interested in wellness and taking care of their health and their body. And these practices, which in Chinese are called yang-sheng, these are primarily Daoist. So, Daoist temples are offering courses in wellness, health, nutrition, meditation, tai chi, and things like that. So, I really think Daoism is slowly finding a foothold in modern China.