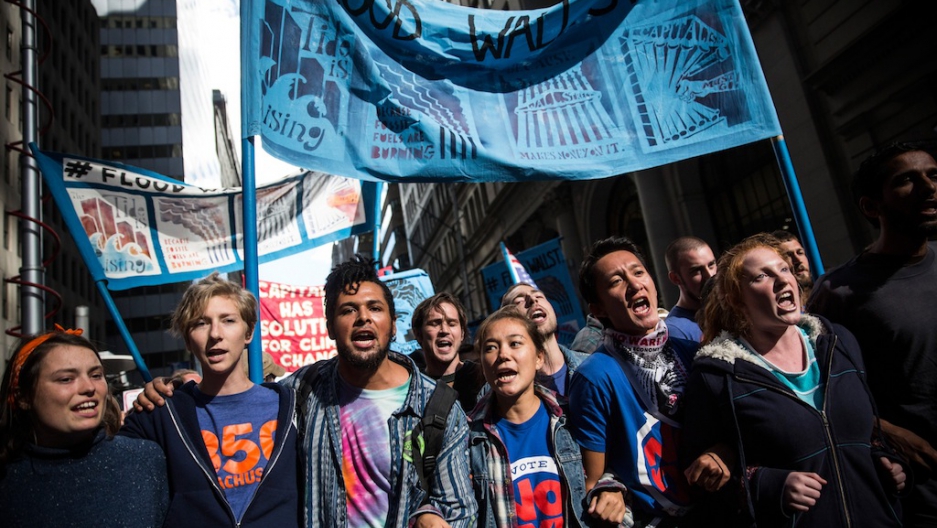 Climate change was at the heart of the talks between President Obama and Indian Prime Minister Narendra Modi this weekend, and the outcome may be more encouraging than widely believed for the make-or-break global climate summit in Paris at the end of the year.

Obama arrived in New Delhi after having secured an historic climate agreement with China last November. For the US and China, the world’s two indisputable climate change superpowers, to publicly commit to limiting their greenhouse gas emissions carried gigantic implications both politically and economically.

Politically, it breathed new life into international negotiations that had seemed doomed to perpetual deadlock. One effect was visible almost immediately, at the climate talks in Lima last December: for the first time, every nation on earth officially agreed to limit its own greenhouse gas emissions.

But economics are what really make the US-China agreement a game-changer, for the agreement should have the effect of putting a de facto, rising price on carbon.

It’s Economics 101: limit the supply of a commodity — in this case, the authority to emit carbon pollution — and its price rises (assuming demand stays constant or rises). China and the US together account for 45 percent of the world’s annual emissions. They also rank as the two largest economies on earth. This gives them decisive influence over global carbon pricing.

Adding to the momentum, a third climate and economic superpower, the European Union, is pursuing even more ambitious emissions reductions, to 40 percent below 2005 levels by 2030.

And ExxonMobil, Royal Dutch Shell and scores of other big companies are already conducting business on the assumption that a global price on carbon is inevitable. ExxonMobil, for example, tests the profitability of its potential long-term investments against the company’s “shadow” prices of $60 per ton by 2030 and $80 per ton by 2040.

If actions by the world’s biggest climate polluters end up setting a de facto price on carbon, that really could change everything. Putting a rising price on carbon will bring the power of the marketplace to bear against climate change — driving consumers, producers, investors and governments throughout the world away from carbon-based fuels and toward solar, wind, energy efficiency and other sources of low-carbon fuels.

It's here that the US-India climate agreement could matter more than most observers have suggested.
India ranks as the world’s third largest annual emitter of greenhouse gases. Like China 20 years ago, India still has hundreds of millions of people living in severe poverty, and its government has declared that raising living standards is a top priority, even if it means burning coal (which currently provides nearly 80 percent of India’s electricity).

Thus Prime Minister Modi refused to commit to the kind of numerical limit on India’s future emissions that China did. But he and Obama did agree to a vast, rapid expansion of solar power in India — 100 gigawatts of new generating capacity by 2022, roughly the equivalent of 100 nuclear power plants — while also opening the door to additional exports of US nuclear plants to China.

Meanwhile, the US-China deal likewise obliged both countries to dramatically expand their deployment of solar, wind, energy efficiency and other non-carbon energy sources. Combined with India’s pledge to accelerate non-carbon energy development, the upshot could well be a revolution in climate change economics.

Obama appears to be hoping to create an economic fait accompli that will end run the political opposition he faces from climate science denying Republicans in Washington. The prices of solar and wind energy have been plummeting in recent years, boosting their market shares at the expense of fossil fuels, especially coal. Now, vast additional solar and wind development in the US, China and India could well accelerate these trends past the tipping point.

More production and deployment of solar and wind will enable economies of scale that drive their prices still lower. This would call forth yet more demand, which in turn will further increase economies of scale and lower prices, boosting market shares even higher. As consumers and local politicians and business leaders see that a modern economy can in fact run on renewable energy — and bring healthier air and reduced climate risk in the bargain — grassroots support for phasing out coal, oil and natural gas should increase.

If these economic trends — along with continued pressure from the growing climate movement that put thousands of people in the streets of New York and other world capitals last September — lead to a strong accord in Paris in December, history may liken the US-China climate agreement to the nuclear breakthrough US President Ronald Reagan and Soviet Union General Secretary Mikhail Gorbachev achieved in the 1980s.

Then, too, the two superpowers’ initial agreement fell well short of what was necessary to avoid disaster.  But that breakthrough kick-started a diplomatic process whereby the two Cold War leaders eventually pulled their respective countries and the world as a whole back from the abyss by agreeing to slash their arsenals of civilization-ending weapons and missiles.

These positive developments come not a moment too soon, for the past months have also brought the usual barrage of bad climate news.

As of late November, the 20 million people living in Sao Paulo had only 60 days of fresh water remaining, thanks largely to the worst drought to hit their region in 80 years. Brazilians hoped the winter rainy season would save them, but that hasn’t happened. Rainfall this winter has been less than half of average levels.

In October, the largest reservoir serving Sao Paulo, the nation’s commercial capital, held 3.3 percent of its usual capacity of water. By mid-January, with only half of the rainy season remaining, the level had climbed to a mere 6 percent.

“The water supply situation is critical,” Mario Thadeu Leme de Barros, the head of the University of Sao Paulo’s hydraulic engineering and environment department, told the Associated Press. Because two-thirds of Brazil’s electricity comes from hydropower, the lower water levels have triggered widespread blackouts in Sao Paulo and other big cities.

Some Brazilian scientists have linked the record drought to global warming.  Antonio Norbert, a climate scientist at Brazil’s National Space Research Institute, argues that the drought originates in the Amazon, where rising temperatures combined with a resurgence of deforestation are interfering with the rainforest’s usual function of acting as a giant water pump.  In normal times, the Amazonian rainforest lifts vast amounts of precipitation into the sky, where winds send it southward before it falls back to earth as rain.

These “flying rivers,” in Norbert’s apt phrase, were greatly diminished in 2013, a year when deforestation spiked in Brazil after five years of decline. The rich agricultural land in central and southern Brazil suffered accordingly; some 70 percent of the country’s GDP comes from areas stricken by the current drought.
The physical momentum of global warming — the fact that carbon dioxide remains in the atmosphere, trapping heat, for centuries after being emitted — means that even if all carbon emissions were halted overnight, global temperatures would not stop rising for at least 30 more years.

2014 was the hottest year on record, the US space agency NASA reported earlier this month. But 2014 will be surpassed in years to come, thanks to the additional warming “in the pipeline.”

Civilization’s survival depends on limiting this future warming to the absolute minimum. The international goal is 2 degrees Celsius above that of the pre-industrial era. By no means is 2 degrees “safe,” as demonstrated when scientists announced in May that the massive West Antarctic ice sheet had begun an “irreversible” retreat after 1 degree of warming.

Nevertheless, limiting temperature rise to 2 degrees should give humanity a better chance of avoiding the absolutely catastrophic changes the UN Intergovernmental Panel on Climate Change had in mind when it warned that “serious, pervasive and irreversible” impacts await humanity unless carbon-based fuels are phased out almost entirely by 2100.

Can governments agree in Paris to reverse current trends quickly enough to avoid such impacts?

Detractors point out that the US-China agreement’s numerical targets fall well short of what is needed to honor the 2C limit. (China committed to cap its emissions by 2030; the US promised to reduce emissions by 26 to 28 percent by 2025, compared to the 2005 level.

Meanwhile, the accord reached in Lima, like the new agreement between the US and India, didn’t even attach numbers to its call for countries to outline, by this spring, their planned reductions. Which is why the US-China deal, the Lima accord and the US-India agreement must be only the first in a series of agreements that become more ambitious over time.

Again, recall the last time humanity faced an existential threat. The first nuclear weapons agreement between the US and the Soviet Union in the 1980s did not come close to delivering full disarmament. But it broke a long-standing stalemate between the two superpowers and help to build the trust, momentum, and public support that made possible the second, third, and fourth agreements that eventually did halt and reverse the arms race.

Likewise, the US-China climate agreement broke the stalemate between the two climate superpowers that had blocked international progress for decades. Now, the way is open to press Washington and Beijing to go further, and bring other nations with them, culminating in a far-reaching global agreement at the Paris summit next December.

Which leads to a final parallel between the climate crisis and the nuclear arms race. In both cases, governments had to be pushed hard by public pressure. In the 1980s, millions marched in New York City and European capitals, calling on both the US and the Soviet Union to end the drill for death known as the arms race.

In 2014, it was no coincidence that Chinese and US leaders reached their historic climate agreement only after facing mass protests — not just the hundreds of thousands who thronged New York in September but also the countless Chinese who took to social media to demand an end to the ghastly air pollution darkening skies and lungs across their country.

History teaches that popular mobilization is essential to achieving real progress on environmental (and most other) issues. How strong “people power” becomes in 2015 may therefore decide whether this is the year when humanity finally takes the actions necessary to secure a livable climate, not only for today’s children but also for generations to come.

Mark Hertsgaard has reported on climate change and politics from dozens of countries for outlets includingThe New Yorker, Vanity Fair, Time, Harper’s, Bloomberg Businessweek and The Nation, where he is the environment correspondent.  He is the author of six books that have been translated into sixteen languages, including most recently, HOT:  Living Through the Next Fifty Years on Earth.